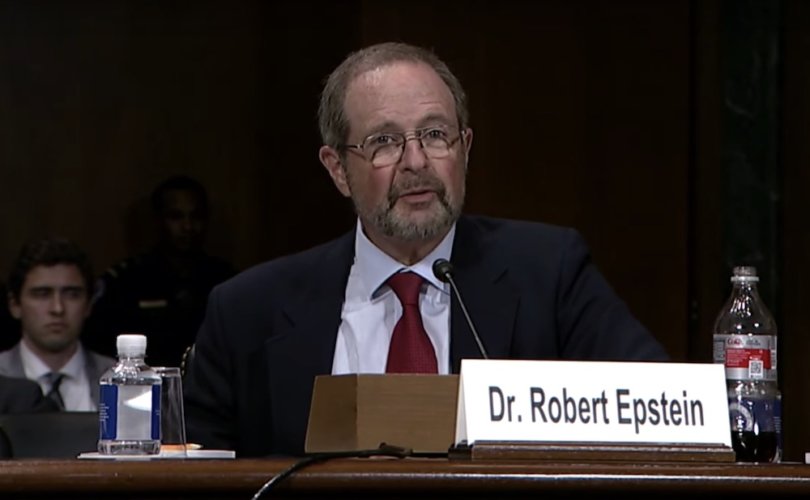 November 7, 2018 (LifeSiteNews) – Google laid out its desire to use its vast influence to “re-engineer humanity” in “one of the creepiest videos you’ll ever see,” a prominent tech researcher explained last month in an interview on The Bill Walton Show.

On October 7, Walton had on American Institute for Behavioral Research psychologist Dr. Robert Epstein and Women’s Rights Without Frontiers founder and president Reggie Littlejohn for a wide-ranging discussion on the influencing of thought from the United States to China.

Among the topics raised was The Selfish Ledger, an internal Google video that leaked last year (and can be viewed here), and details how Google could use “total data collection” to transform society by influencing the individual decisions of millions of people.

“User-centered design principles have dominated the world of computing for many decades, but what if we looked at things a little differently?” it asked. “What if the ledger (the video’s term for the profile created by an individual’s data usage) could be given a volition or purpose rather than simply acting as a historical reference? What if we focused on creating a richer ledger by introducing more sources of information? What if we thought of ourselves not as the owners of this information, but as custodians, transient carriers, or caretakers?”

“These are Google employees explaining this to other people at Google,” Epstein explained. “This explains that we have the power to re-engineer humanity. And the phrase ‘using company values’ is actually in this film. And, in fact, they do have that power. And what this video shows is they actually discuss using this power.”

In The Selfish Ledger, Google X design chief and Near Future Laboratory co-founder Nick Foster envisions a system in which users select a personal goal or value – one that “reflect(s) Google’s values as an organization” – such as environmental friendliness, and Google recommends products or services that align with it.

From there, the system would retain data on users’ goals and choices to, in Foster’s words, “refine” a “model of human behavior” that will shape future generations’ choices and eventually “develop a species-level understanding of complex issues such as depression, health, and poverty.”

When the video was originally revealed in 2018, Google X acknowledged to The Verge that the video was “disturbing,” but maintained it was merely a “thought-experiment” intended to “explore uncomfortable ideas and concepts in order to provoke discussion and debate,” and was “not related to any current or future products.” But Epstein maintains that The Selfish Ledger accurately depicts Google’s true objectives.

“In the United States with companies like Google, we're talking about control that's completely invisible to people,” he said. “And it's not control that's in the hands of, you know, some responsible agencies and very diverse groups of people who are discussing what's best for everybody. We're talking about control by mainly one and to a lesser extent a couple of other private companies … it's terrifying to me. And the more I've learned about it over the years, the more concerned I've become.”

“There are much bigger issues here than whether or not, you know, they suppressed conservative content in the United States,” Epstein told Walton. “Google is impacting the beliefs, attitudes, purchases, the votes of 2 1/2 billion people around the world, they’re impacting people in almost every country in the world at the moment except China. And that could change any day.”

Epstein is the researcher behind estimates that Google may have swung as many as 2.6 million votes to Democrat Hillary Clinton in 2016. In July, he told the Senate that he has identified “nine different blacklists Google maintains to suppress information worldwide,” encompassing Google’s search results, autocomplete feature, Google Maps, YouTube searches, Google News, AdWords and AdSense, banned user accounts, and website quarantines.