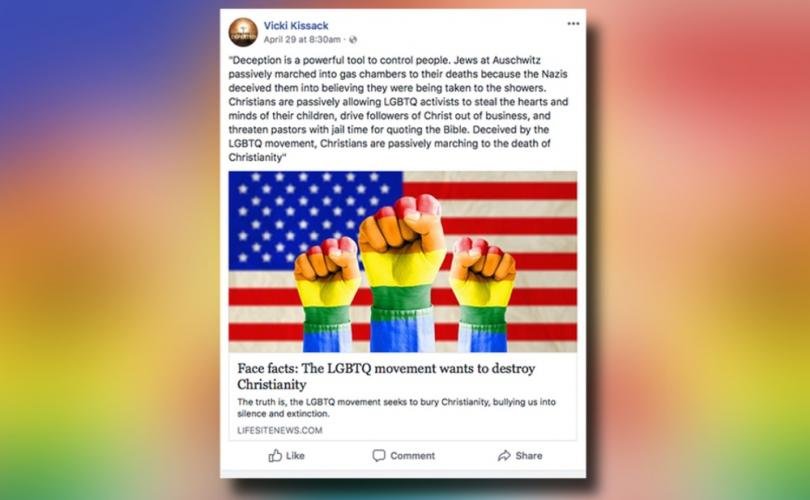 CASPER COUNTY, Wyoming, May 15, 2018 (LifeSiteNews) – The chair of the Campbell County Republican Party in Wyoming became a target of left-wing attacks after she shared a LifeSiteNews article highlighting the LGBT agenda on social media.

On April 29, Vicki Kissack shared on Facebook a link to an April 26 piece by Lloyd Marcus titled, “Face facts: The LGBTQ movement wants to destroy Christianity.” The op-ed was responding to legislation introduced in California that conservative legal analysts say is written broadly enough to ban books and other forms of speech intended to help people overcome unwanted same-sex attraction.

“Deception is a powerful tool to control people. Jews at Auschwitz passively marched into gas chambers to their deaths because the Nazis deceived them into believing they were being taken to the showers,” Marcus wrote in the quote Kissack shared with the link. “Christians are passively allowing LGBTQ activists to steal the hearts and minds of their children, drive followers of Christ out of business, and threaten pastors with jail time for quoting the Bible. Deceived by the LGBTQ movement, Christians are passively marching to the death of Christianity.”

The post was met with various comments accusing Kissack of “spew[ing] hatred,” pushing the “christian version of sharia law” [sic], and more, as well as comments agreeing with her and Marcus. Subsequent posts of hers on unrelated subjects were also spammed with complaints and charges of bigotry, as well as rainbow flags and pictures of men kissing.

Gillette Mayor Louise Carter-King said that “compar[ing] any group of people to Nazis is vulgar and against everything that a decent society represents,” while Commission Chairman Mark Christensen said that Campbell County “deserves better than to be portrayed as a haven for bigotry and intolerance.”

“I’m a Christian and I’m gay,” Wyoming Equality volunteer Hank Pridgeon, who also says he’s a Republican, told the Casper Star Tribune. “How dare she make a statement like that? That offends me.”

The Tribune also notes that earlier this year, Kissack explained that she sometimes posts “hot-button topics” on social media “just to see what the pulse of my community is.”

On May 1, Kissack posted a follow-up statement explaining that her disagreement with homosexuality and objections to LGBT activists don’t translate to hatred of homosexual individuals.

Kissack told those who “choose to post hateful things on my page” despite not knowing her that “I may not agree with your lifestyle but I believe that you are perfectly made in the image of God and try as you might you will not change my convictions and beliefs.”

She also told the Gillette News Record that she had “no ill intention or ill motive” for sharing the article, and that the controversy has been “blown out of proportion.”

“I feel like I have been cherry-picked to make an example out of, and that is deeply concerning to me,” she said.

“We’re in a nation built on liberty and freedoms,” Kissack continued. “I don’t think that we should ever retreat on our freedom. We need to rise up and not retreat.”

On May 14, Marcus addressed the controversy at American Thinker, where his previous piece first appeared.

“I praise God for Wyoming GOP county chair Vicki Kissack having the courage to share my article,” he wrote. “The immediate severe attack on Kissack for simply sharing my article confirms the bullying and intolerance of LGBTQ enforcers that I exposed.”

“Please pray that God gives this patriot sister courage to stand and will build a hedge of protection around her and her family,” Marcus urged his readers, invoking Isaiah 54:17: “No weapon that is formed against thee shall prosper.”