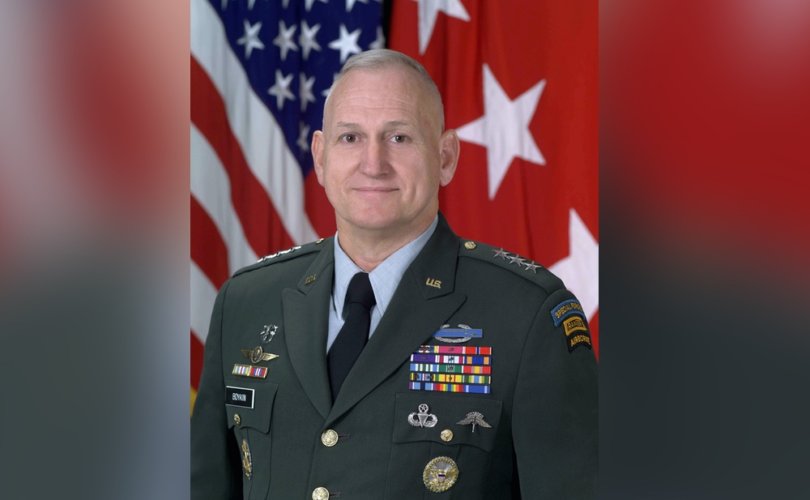 SOULSBYVILLE, California, June 17, 2020 (LifeSiteNews) – A coalition of area left-wing groups are banding together to attack a California church for hosting a prominent pro-family leader as part of its reopening, accusing the church of legitimizing “hate.”

Calvary Chapel Sonora Men's Ministries in Soulsbyville has announced its sixth annual men’s conference for this weekend, which will kick off the reopening of the Church of Tuolumne County with a catered lunch, activities, and a guest speaker: Lt. Gen. (Ret.) William G. “Jerry” Boykin, an ordained minister, founding member of the U.S. Army’s Delta Force, former Deputy Undersecretary of Defense for Intelligence, and current Executive Vice President of the Family Research Council (FRC).

Several left-wing organizations intend to respond to Boykin’s involvement by protesting the event, according to Left Coast Right Watch (LCRW), a Bay Area site that bills itself as a monitor against “extremism.” The article, by LCRW’s editor in chief Abner Hauge, accuses Boykin of “campaigning against LGBTQ+ rights” for his Christian stances on marriage and sexuality, and of “vilifying Muslims.” Hauge even writes that Boykin is “likely guilty of war crimes,” though he offers no evidence for the explosive claim.

As for the charge of Islamophobia, Hauge claims that “Boykin has a long and well-documented history of bigoted statements against Muslims,” but acknowledges that “LCRW didn’t bother tracking down the specific quotes,” because Calvary Pastor Dave Atkins’ defense of Boykin was “in obvious bad faith.”

Hauge’s sole example is Boykin decrying the influence of the Muslim Brotherhood, which is not a general reference to Muslims but a specific organization with deep, documented ties to global terrorism.

Nevertheless, LCRW’s allies are planning to demonstrate against Boykin's remarks. “It’s hard to see a church and the Family Research Council out here,” complained Julie Gorgas, Vice President of Tuolumne County Indivisible (TCI). “I’m really against conversion therapy and this guy is responsible for thousands of LGBTQ suicides. I just think it’s really disappointing that a Christian church would invite someone like that to speak–as if he’s a good moral leader.”

Flyers being distributed around Soulsbyville implores people to protest to “celebrate Pride Month,” stand in solidarity with “black trans lives,” and “remind Calvary Church that hate is not a Christian value.” Activists are also circulating phone numbers and email addresses of the church’s leadership.

As a result, Cavalry has been deluged with hostile emails and Facebook comments attacking them for “having a bigot appear at a Christian event,” for inviting “controversy and conflict” over “inclusion,” and calling them “despicable” and even “neo-fascist.”

In response to the attacks, Atkins released a statement defending Boykin and rejecting any notion that the event is meant to “cause offense to our friends in the LGBTQ community.”

“It is true that I support our keynote speaker and have promoted his arrival for some time now. It is also true that Boykin has made some comments in the past that are currently being used against him,” Atkins said. “He has made public clarifications pertaining to those comments and you can research them on the web on your own time. The protest against his coming to speak to our men, during pride month, is a distraction from the greater message that he proclaims – The Gospel. He is an American hero with a stellar military record in the United States Army.”

Atkins announced that the ministry will be meeting any protesters at their driveway with free food and drink, and implored the event’s regular guests to keep their focus on the spirit of the event, not potential confrontation.

“Do not come to pick a fight,” he said. “Come with a humble heart ready to hear from God’s Word. Do not invite friends on the basis that this is being protested. Do not rant on Facebook on behalf of CCS. If you have a chip on your shoulder leave it at home. Those protesting this event are not our enemies. They have the potential to be our future brothers and sisters who have yet to place their faith in Jesus Christ.”

“Since the beginning [the] problem hasn’t been a skin issue,” but rather a “sin issue,” Atkins continued. “The issue is a moral rebellion against a plan that a loving God has laid out in His word. The issue and the solution have never changed. The more biblical we become, the less racial we will be. The same Bible that teaches marriage is only between male and female is the same Bible that teaches us to ‘love our neighbor.’”

Tuolumne County Indivisible is under the nationwide banner of Indivisible, a “movement of thousands of group leaders and more than a million members taking regular, iterative, and increasingly complex actions to resist the GOPs agenda, elect local champions, and fight for progressive policies.

The group admits to receiving a “modest general operating grant” from far-left financier George Soros’ Open Society Foundations (OSF) in 2017, but denies the connection goes further than that.

Many of those attacking Calvary cite as their source for labeling Boykin and FRC “hateful” the infamous Southern Poverty Law Center (SPLC), a far-left group known for its efforts to drive conservative and pro-family organizations out of mainstream society. Despite its popular media framing as an authority on “extremism,” SPLC has found itself on the losing end of at least one defamation suit for its work, and has been called by insiders a “highly profitable scam” that uses “civil-rights work mainly as a marketing tool for bilking gullible Northern liberals.”