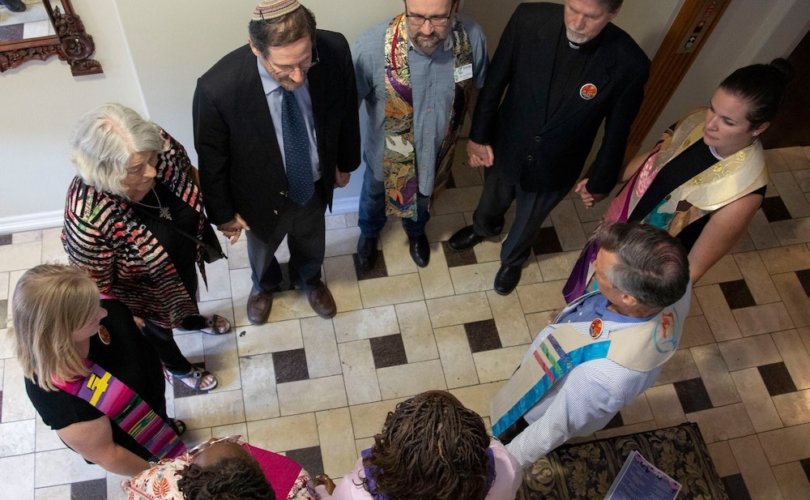 AUSTIN, Texas, July 11, 2019 (LifeSiteNews) – A small multi-faith group of left-wing “religious” leaders gathered at the Austin location of Texas abortion business Whole Woman’s Health Alliance (WWHA) Tuesday to “bless” the location, granting a veneer of religious legitimacy on an organization that kills human beings and has a history of health violations.

The gathering was organized by the so-called Religious Coalition for Reproductive Choice (RCRC) and Texas Freedom Network (TFN), according to a WWHA Facebook post calling it a “very powerful and empowering moment, complete with ritual, poetry, singing and insight that served to break away from the perception that religious communities are opposed to abortion.”

HuffPost reports that the gathering featured a “prayerful walk” of the path through the facility’s waiting area, patient rooms, counseling rooms, and offices. The Texas Observer adds that the group also sang “Hallelujah.”

“As people of faith, it’s not that we think we’re bringing God to this place; we believe God is already present in that space,” Austin campus minister Amelia Fulbright told HuffPost. “But it’s to ask for prayers of safety, healing, and peace, to infuse the space with an energy that is life-giving for women, a lot of whom are in an anxious time.”

Fulbright added that at one point during the event she breastfed her own four-month-old baby, and claimed that nursing a child inside an abortion center somehow demonstrated that it was a “life-affirming space” because it “paints a different picture than what the anti-abortion movement would like you to think happens in abortion clinics” (while employees or women who visit abortion centers for other reasons may occasionally breastfeed onsite, it is not, in fact, representative of what happens to most preborn children who accompany their mothers inside).

“We’re trying [to] say [that pro-lifers’] narrative isn’t the only narrative related to faith,” Kentina Washington-Leapheart of the Connecticut-based Religious Institute, another event organizer, told the Observer. “Women seeking an abortion are largely women of faith. They’re not having an abortion in spite of their faith, it’s in many ways informing the decision they make […] They have a God-given right to make decisions about their life.”

The Bible repeatedly condemns “murder” and “shed[ding] innocent blood” as “detestable to” the Lord, because “in the image of God has God made mankind.” From there, “there’s really only one question left to ask,” pro-life apologist Scott Klusendorf argues. “If the unborn are human, then the same commands that forbid the shedding of innocent blood in these other cases apply to them as well.” Long-settled biological criteria and mainstream medical textbooks establish that a whole, distinct, living human exists once fertilization has occurred.

Neither report on the incident quotes any of the gathering’s participants as grappling with either the Bible or embryology to justify supporting abortion in God’s name. The Religious Coalition for Reproductive Choice’s page on the “moral case” for its position claims as its “religious principle” “compassion for the complex choices each individual may confront and the impact of these choices on families,” but doesn’t attempt to construct an argument.

The Texas Freedom Network’s website purports to cite dozens of texts, but a cursory overview reveals the group’s interpretations to be torturous at best. For instance, from God concluding in Genesis 1:31 that “all that he had made” was “very good,” TFN infers that “this includes the bodies of women, who are under threat when they cannot receive equal access to full reproductive health services” (TFN doesn’t address the obvious conclusion that the “bodies of women” would still be “very good” and therefore worth protecting while developing in the womb).

Furthermore, Whole Woman’s Health is a particularly problematic example to use in framing the abortion industry as a model of Christian compassion.

In 2017, a Texas Department of State Health Services report identified numerous offenses at the chain from 2011 to 2017, including rusty equipment, failing to properly disinfect and sterilize instruments between use, lacking proper written operation procedures, improper storage of hazardous chemicals, unsanitary surfaces, failing to follow up with patients, holes in the floor, and more.