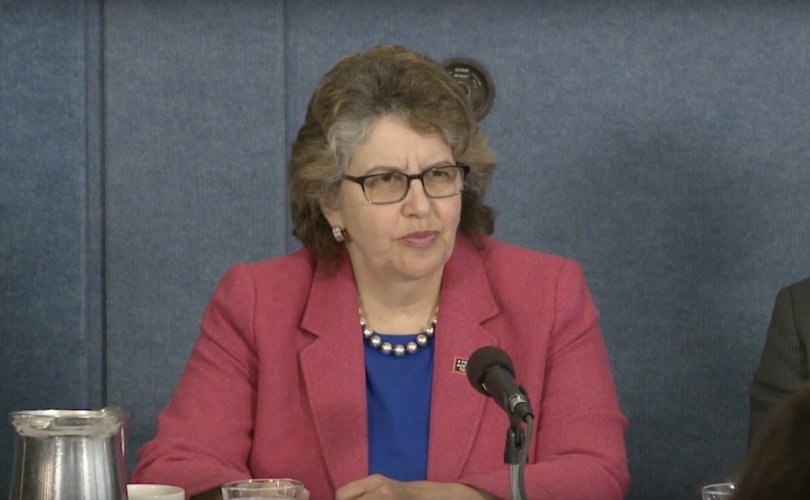 WASHINGTON, D.C., September 6, 2019 (LifeSiteNews) – The Democrat chairwoman of the Federal Election Commission (FEC) wants to meet with representatives from Google, Facebook, and Twitter this month to discuss how to “minimize the disruption and confusion” of fake news, which conservatives fear is code for suppressing information inconvenient to Democrats ahead of the 2020 elections.

“The goal of the symposium will be to identify effective policy approaches and practical tools that can minimize the disruption and confusion sown by fraudulent news and propaganda in the 2020 campaign,” FEC chair Ellen Weintraub wrote in an invitation for the three top tech companies to meet with her on September 17, Politico reported.

So far, Facebook and Twitter are confirmed to attend the event, which is being cohosted by Stanford University and the free-speech nonprofit PEN America, and will also involve scholars, journalists, and lawmakers of both parties.

One unnamed FEC official told Politico the event is based on concerns about “home-grown disinformation” impacting the election. “Under the First Amendment, we don’t ban false statements in advertising and social media, but there’s a difference between the right to speak and the right to be disseminated” online, the official claimed.

That’s a controversial premise that appears to presuppose that government can and should be trusted with the power to determine what counts as “real” news. “The FEC has no business policing the truth or accuracy of speech of any kind by American citizens on the internet,” former Republican FEC chair Lee Goodman told the Washington Examiner. “The FEC’s only role is prohibiting foreigners from spending money to influence American elections, and foreign propaganda should be policed by the FBI and Department of Justice.”

During Goodman's tenure, he fought efforts to crack down on conservative media outlets like Fox News and the Drudge Report. At the time, Weintraub appeared to agree that “coverage of our political system is fully protected, generally by the First Amendment, and specifically by the Federal Election Campaign Act and Commission regulations.”

“I concluded (during that fight) that conservative speakers and press would always be held to a double standard if government got to regulate them,” Goodman recalls. “Now the hook to get Drudge is something vaguely defined as ‘disinformation,’ however that might be defined. The FEC has no business regulating the internet or browbeating internet platforms to censor American citizens.”

Ever since President Donald Trump’s 2016 election victory spurred the current push for tech giants to police fake news and “election interference,” conservatives have argued Google, Facebook, and Twitter are too active in that area as it is – and too biased.

Multiple analyses have found that Facebook’s algorithm changes instituted at the beginning of 2018 disproportionately impacted conservative politicians and websites. Earlier this year, an insider revealed that Facebook “deboosts” traffic to several mainstream conservative sites, and the social network has come under fire for numerous instances of censoring conservative content under questionable pretenses.

Twitter, meanwhile, holds the mere act of “misgendering” someone — i.e., referring to a user by his sex rather than his preferred “gender identity” — to be “hateful conduct,” yet has let stand violent and hateful tweets directed at conservatives. There have been a long series of bans and suspensions affecting non-violent, non-obscene tweets from right-of-center perspectives (including LifeSiteNews), and Twitter insiders have admitted to intentionally targeting conservative accounts and topics.