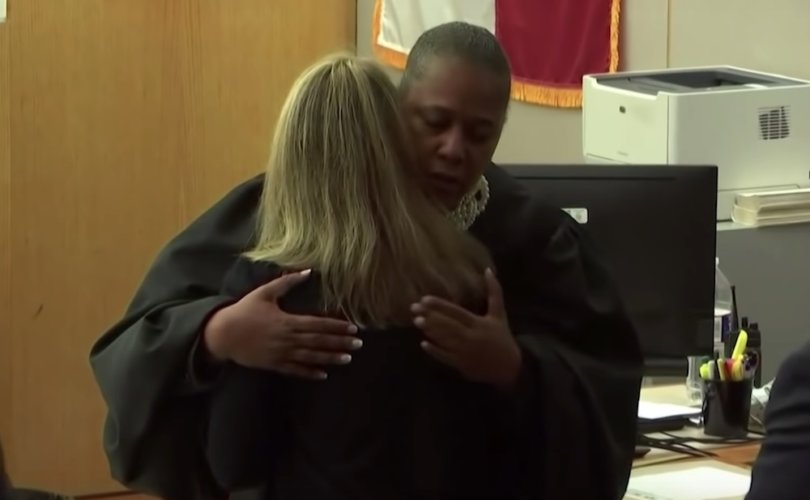 SUPPORT Judge Kemp – the judge who gave her Bible to a convicted killer Sign the petition here.

DALLAS, Texas, October 4, 2019 (LifeSiteNews) – The week’s sentencing of former Dallas police officer Amber Guyger for the shooting of an unarmed man has earned widespread attention featuring a powerful display of Christian forgiveness, but one left-wing organization is taking issue with Judge Tammy Kemp expressing her own faith in the aftermath.

Guyger has been sentenced to 10 years in prison for killing Botham Jean, a man who lived in the apartment above hers. Guyger had mistaken his apartment for her own, and shot him on the assumption he was an intruder.

During her sentencing hearing, Jean’s brother Brandt Jean told Guyger that he forgives her, and that God will do the same if she asks Him to. “I want the best for you because I know that’s exactly what Botham would want you to do…and the best would be: give your life to Christ,” he said, before tearfully asking for permission to hug her.

Judge Kemp agreed, then gave Guyger her own Bible, embraced her, and prayed with her.

The Freedom From Religion Foundation (FFRF), an organization dedicated to challenging benign intersections of religiosity and every level of government, filed a complaint Thursday with the Texas State Commission on Judicial Conduct, the New York Times reports.

“Delivering Bibles and personally witnessing as a judge is an egregious abuse of power,” the FFRF contends. Kemp “transmitted her personal religious beliefs as a state official in an official proceeding of the gravest nature.”

In fact, Kemp’s official duties had already concluded; the sentencing was over and the jury dismissed, meaning the case hinges on whether judges may share their faith in any capacity while at court.

“We want our judges to be human and to show their humanity,” University of Houston judicial ethicist Renee Knake told the Times. “That’s why our cases are decided by human beings and not machines.”

“FFRF is protesting Judge Kemp rather than joining the rest of the nation celebrating the compassion and mercy Judge Kemp demonstrated,” First Liberty Institute responded in a statement. “We should all be thankful the law allows Judge Kemp’s actions and we stand with her and will gladly lead the charge in defending her noble and legal actions.”