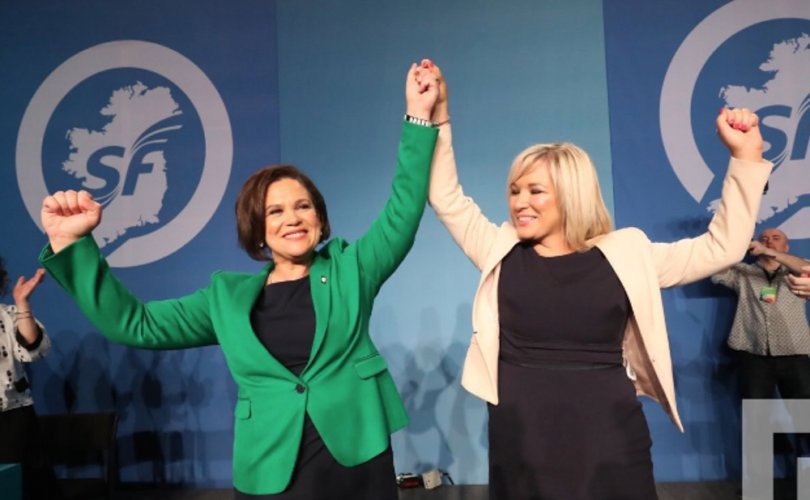 The other parties are allowing a free vote, as is the norm in the UK.

IRELAND, February 13, 2018 (SPUC) – Sinn Féin TDs will not be allowed a conscience vote on abortion and anyone who deviates from the party line will be disciplined, the party’s new leader Mary Lou McDonald has said.

“It’s a matter of private conscience but it’s also a matter of public policy,” Ms McDonald, who replaced Gerry Adams as President of Sinn Féin on Saturday, told RTÉ’s The Week in Politics on Sunday. Asked if TDs could vote in accordance with their conscience, she said: “They do have to respect and uphold and vote in accordance with Sinn Féin policy.”

Asked if failure to do this could result in disciplinary action she replied: “To be frank, yes.”

Two of the party's TDs, Peadar Tóibín and Carol Nolan, are known to be against repealing the Eighth Amendment and legislation that would allow unrestricted abortion 12 weeks into pregnancy.

The other major political parties, Fine Gael and Fianna Fáil, are allowing free votes for their TDs. In Britain, abortion is always considered a matter of conscience, and is not subject to political whipping.

Ms McDonald did not specify what form any disciplinary action would take, but Mr Tóibín was previously suspended for six months for going against the party position in a Dáil vote relating to abortion.

At odds with own party

Sinn Féin policy favours repeal of the Eighth amendment and the legalisation of abortion in cases of rape, fatal foetal abnormality and where a woman’s mental or physical health is “under serious threat”. It remains opposed to abortion on request without reason.  However, Ms McDonald supports the findings of the Oireachtas committee, which recommended the legalisation of abortion up to 12 weeks in pregnancy.

Ms McDonald said “the party is not in policy terms in line with that at the moment”, but said a policy paper was “close to completion” which may lead to a change in the party’s policy. A special ard fheis (party conference) is being planned to consider the matter, and it is seen as likely to change its position.

In 2013, Sinn Féin politicians in Northern Ireland were accused of betrayal for blocking a motion that would have closed a Marie Stopes Centre in Belfast.

Reprinted with permission from the Society for the Protection of Unborn Children (SPUC).