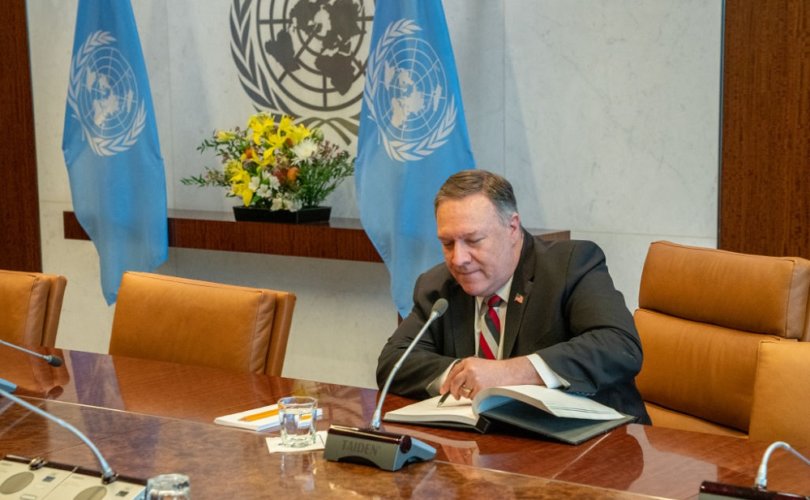 NEW YORK, March 26, 2020 (C-Fam) — A recent lawsuit initiated by LGBT and feminist pressure groups charges that the U.S. State Department’s Commission on Unalienable Rights was created in violation of federal guidelines and must be disbanded.

In filing the lawsuit, Kerry Kennedy of the Robert F. Kennedy Center for Justice and Human Rights said, “The Commission on Unalienable Rights’ discriminatory work must be stopped, quickly. Without action we risk the destruction of decades of progress by the human rights movement and emboldening oppressive regimes everywhere.”

Mark Bromley, chairman of the Council for Global Equality, said, “Secretary Pompeo often argues that the modern proliferation of human rights claims cheapens the currency of human rights but it is this illegal Commission, with its warped use of religious freedom and natural law to deny rights, that cheapens the very notion of religious freedom and our country’s proud tradition of standing up for the rights of those who are most vulnerable.”

While Secretary Pompeo’s office said early on the Commission would not be about abortion and LGBT, homosexual rights and feminist organizations are insisting they be the centerpiece of the Commission’s work.

The outrage from homosexual rights groups on account of the Commission on Unalienable Rights, created last July to examine authentic human rights and how best to advance them, is one aspect of the skewed focus on sexual rights issues.

The chief complaint is that the commission is one sided in the definition of what is and is not a human right. The controversy is embedded in the title of the Commission and its reference to “unalienable” rights. On one hand International documents tend to favor what many consider to be fundamental rights over against what Commission Chairman, Harvard Law Professor Mary Ann Glendon, once referred to as “rights talk,” the insistence on the ever-expanding notion of rights.

In recent years, members of the sexual left, including those in the State Department, have attempted to create internationally recognized human rights to abortion and same-sex sexual expression. During the Obama administration, the homosexual issue was placed within the Office of Religious Freedom. Complaints based upon sexual orientation and gender identity became a part of the annual State Department Report on Human Rights. The abortion issue, under the guise of “reproductive rights,” was also included in the Obama-era report. Critics wondered what homosexuality and abortion had to do with religious freedom. Under the Trump administration, both issues were removed from the annual report.