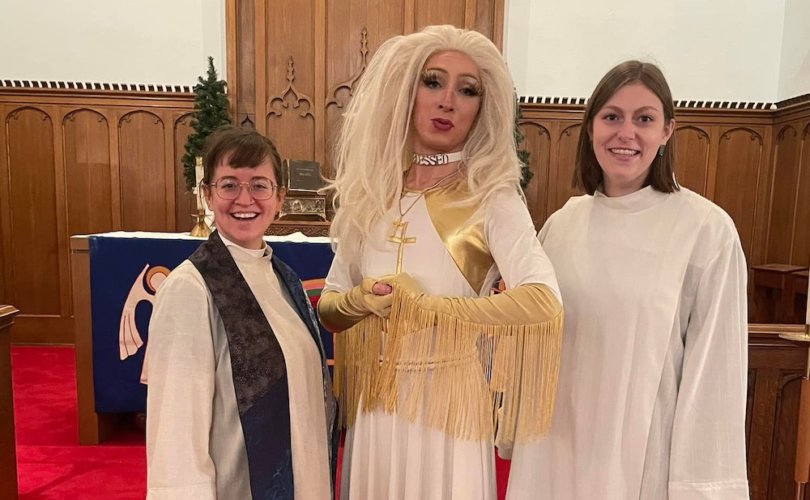 CHICAGO (LifeSiteNews) – A liberal Lutheran church in Illinois has made itself the subject of controversy by hosting a “drag sermon” for children.

In a December 11 Facebook post, St. Luke’s Lutheran Church of Logan Square pastor Aaron Musser explained that for his then-upcoming sermon, “preaching in drag” would be “a theological reflection on joy,” which “overflows so abundantly, it can’t help but make itself known.”

“It’s been a difficult and tiring couple of years. And I decided instead of telling you, ‘this is how I want you to be joyful,’ as we prepare for this dress rehearsal, I figured I would instead put on a dress as so many who have inspired me have done,” Musser preached on December 12, clad in a blonde wig and full-length white dress emblazoned with a cross, to a group of children in COVID-19 masks.

“I decided to follow their example, showing that liberation from oppressive laws clears a path for joy,” he added. “But allowing yourself to feel joy can be scary. I wasn’t sure how the outside world would handle me when they saw me this morning. Joy is difficult to feel, it’s vulnerable. But isn’t it so beautiful?”

The website for St. Luke’s makes clear the church’s heavy inclinations toward contemporary left-wing notions of “social justice,” describing itself as “striv[ing] to be a radically welcoming congregation” that “affirm[s] all races, ethnicities, gender identities, sexual orientations, and other diverse backgrounds” and is “on a journey toward antiracist and anti-oppression transformation.”

“I’d say it’s pretty sick that these people find joy in rebelling against God,” writes evangelical news website Reformation Charlotte of the event. “And worse, involving children in this sickness is a sure way to end up worse than a millstone tied around your neck and tossed into the sea.”

In addition to flouting biblical teaching on human sexuality, the incident echoes the controversy over the spread of Drag Queen Story Hour events, in which adult crossdressers read storybooks to children in public libraries across the country.

Drag Queen Story Hour organizers admit one of their central purposes is to indoctrinate children about “learn[ing] to see beyond the pink and blue gender binary.” Many have exposed children to sexually-charged performances as well as drag queens who range from x-rated performers in their day jobs to convicted pedophiles and prostitutes.