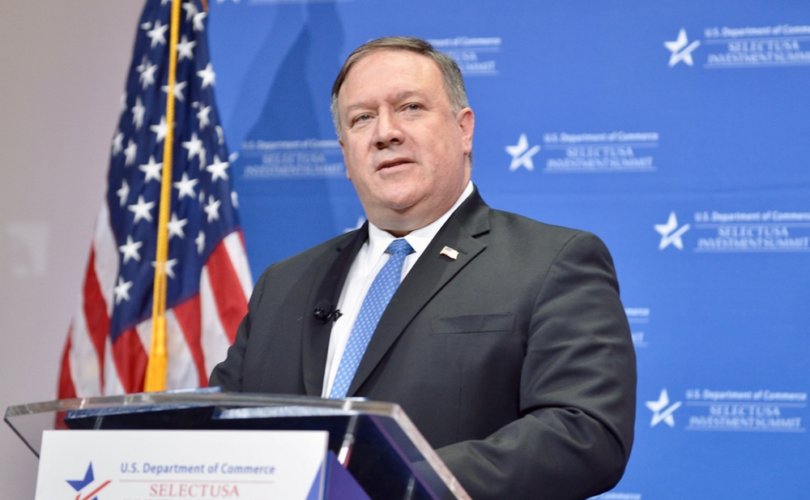 March 10, 2020 (LifeSiteNews) – A coalition of so-called “human rights” organizations has filed a federal lawsuit against US Secretary of State Mike Pompeo and the US State Department over its initiative to study and challenge the international human-rights consensus, which often elevates government entitlements to the status of “rights” while disregarding fundamental values such as the right to life.

In July, Pompeo announced the formation of a Commission on Unalienable Rights, which would “provide the Intellectual grist of what I hope will be one of the most profound re-examinations of inalienable rights in the world since the 1948 Universal Declaration [on Human Rights at the United Nations].” The panel is tasked with offering “fresh thinking about human rights discourse where such discourse has departed from our nation’s founding principles of natural law and natural rights.”

On Friday, the organization Democracy Forward filed a lawsuit representing the Robert F. Kennedy Center for Human Rights, Center for Health and Gender Equity, Council for Global Equality, and the Global Justice Center, CNN reports. It names Pompeo, Director of Policy Planning Staff Peter Berkowitz, and the department as a whole, accusing them of establishing the commission in violation of guideline set by the Federal Advisory Committee Act of 1972.

Whereas that law requires committee memberships to be “fairly balanced in terms of the points of view represented,” and most committee meetings “open to the public,” the suit alleges that the new commission is “stacked with members who have staked out positions hostile to LGBTQ and reproductive rights,” and is “holding closed door meetings to conduct significant Commission business outside of the public's view and scrutiny” while “failing to provide adequate notice of meetings and to release key documents to the public.”

While natural law, as articulated in the works of Enlightenment thinkers such as John Locke, provided the intellectual basis for the Declaration of Independence and U.S. Constitution, invoking the term is controversial among those who favor emphasizing so-called “collective goods” or “social justice” above the notion of unalienable individual rights that transcend government. Accordingly, any challenge to the status quo has the potential to undermine the notions of a “right” to abortion or same-sex “marriage.”

The State Department has so far declined to publicly respond to the lawsuit, but Democracy Forward’s reference to “LGBTQ and reproductive rights” seems to confirm suspicions that the lawsuit is motivated at least partly by concerns about the commission’s impact on the abortion and LGBT agendas, not on any actual human rights as classically understood.