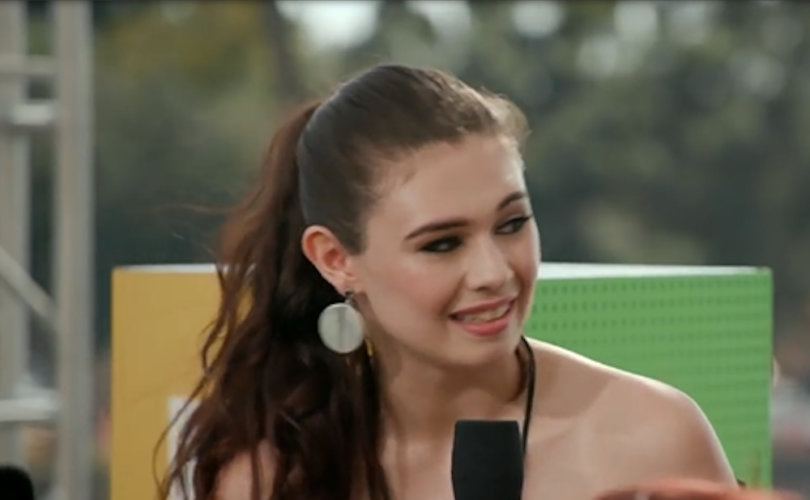 Nicole Maines, a man identifying as a woman whose birth name is Wyatt, will be a trans character on The CW show Supergirl this fall.YouTube

July 23, 2018 (LifeSiteNews) — Since its debut, Supergirl has been the most aggressively political of The CW’s stable of DC Comics television adaptations, and it’s slated to become even more so when it returns in October.

The Wrap reported that over the weekend the team behind the show announced at San Diego Comic Con that Nicole Maines, a man who identifies as a woman, has been cast as Nia Nal, a “soulful young transgender woman with a fierce drive to protect others” under the code name Dreamer.

Maines, born with the first name Wyatt, is also a transgender activist who several years ago sued the Orono School District in Maine over the ability to use female bathrooms. The school had originally accommodated his request but made him settle for single-stall restrooms meant for staff after a bullying incident. A court sided with him and awarded the Boston-based Gay & Lesbian Advocates & Defenders (GLAD) $75,000 in 2014, most of which went to Maines’ family.

“We can be whoever we want, we can do whatever we want, we can be superheroes, because in many ways we are,” Maines told Variety. “We’ve had trans representation in television for a while, but it hasn’t been the right representation.” He also referenced the recent controversy over Scarlett Johansson being forced to exit a perceived trans role, saying that “having trans people play trans roles show that we are valid in our identities and we exist.”

Notably, however, it appears Maines may be doing the same thing Johansson did, albeit in reverse. The overviews for Dreamer’s original comics counterpart on both Wikipedia and the unofficial DC Database describe her as simply a straight female, and make no mention of transgenderism. ComicBook.com speculates that the TV version may be a composite of several characters.

The decision is the latest in a long line of “social justice” gestures from Supergirl, which has promoted left-wing messages about feminism, homosexuality, the police, global warming, illegal immigration, and more in its first three seasons, as well as thinly-veiled insults toward President Donald Trump. Most notably, the show made the titular heroine’s adoptive sister Alex a lesbian who wants to be a mother.

All the CW/DC shows, colloquially known as the “Arrowverse,” feature at least one openly homosexual character in the main or recurring cast. But while all have occasionally dabbled in political messaging, Supergirl’s biggest competitor for the most ideological superhero show will come in 2019 with Batwoman, about a lesbian superhero who has a “passion for social justice” and was “kicked out of West Point once she came out of the closet.”