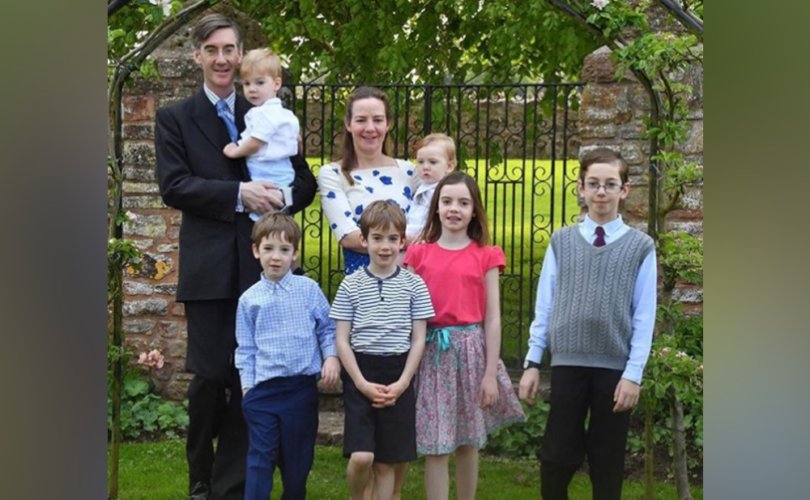 The incident took place while the pro-family, Catholic lawmaker’s family was taking a vacation in New York City.

As first discovered by his maid, the messages spray-painted on the family’s garage, patio window, bench, and garden umbrella included “shut up and die,” “posh scum,” “politics death,” anarchist symbols, and some obscenities. The vandals had also scattered condoms on their lawn and driveway, and hung condoms from a small cross in the garden.

Local police say they are currently investigating. The perpetrators’ identities are unknown, though police believe the condoms to be referencing Rees-Mogg’s Catholic stance on birth control, and The Sun says they are “thought to be anti-Brexit anarchists.”

For his part, Rees-Mogg appears to be taking the incident in stride.

“It looks to me like a bunch of…somebody had a pint or two too many scrumpy,” he told The Sun. The politician also said the graffiti “all wiped off very easily,” so “this drunken protest will not even have a short-term effect.”

Rees-Mogg is an avowed Catholic father of six who has said he strives to pray the rosary every single day, named his sixth child Sixtus Dominic Boniface Christopher, and prefers the Traditional Latin Mass for its focus on the Eucharist.

He has also endured media attacks for his public declarations that he is “completely opposed to abortion” and that “marriage is a sacrament and the decision of what is a sacrament lies with the Church and not with Parliament.” In May, he drew attention for debating BBC host Jo Coburn’s suggestion that his faith-based opinions disqualified him from public office.

“It is really important to get to the heart of this because this country believes in religious tolerance. We are a very tolerant nation,” Rees-Mogg noted. “And the act of tolerance is to tolerate things you do not agree with not just ones you do agree with and the problem with liberal tolerance is it has got to the point of only tolerating what it likes.”

As for his New York trip, Rees-Mogg wrote in his most recent column that it was “always refreshing to visit the United States,” in part because the “belief in the power of the individual combined with the rights of property, the rule of law and a settled democratic constitution have combined to make the US a uniquely successful nation.”

He also praised Donald Trump’s “remarkable” presidency for “deliver[ing] on his electoral promises to ensure that he maintains faith with his voting base,” despite having “hardly left a rule of diplomacy unbroken.” Rees-Mogg suggested “other democratically elected politicians would do well to heed” that example.