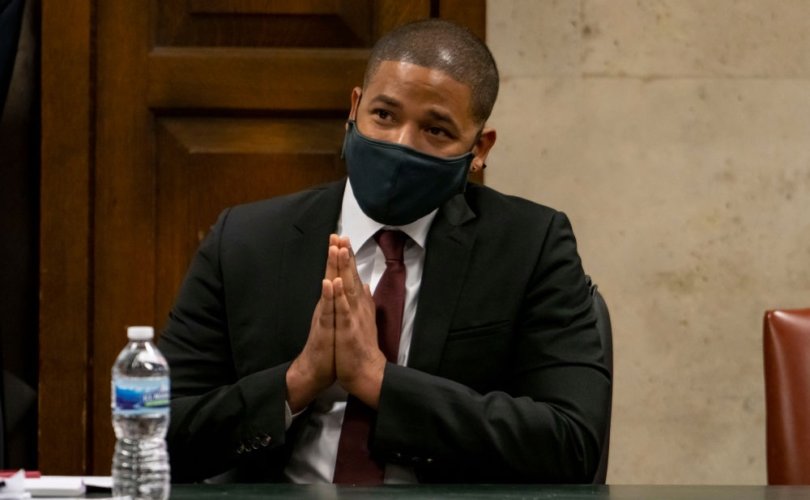 CHICAGO (LifeSiteNews) — Left-wing actor Jussie Smollett was released from jail Wednesday just days after he was sentenced to five months behind bars for fabricating a hate crime allegedly committed against himself in 2019.

After posting a $150,000 personal recognizance bond, Smollett walked out of Cook County Jail in Chicago on the evening of March 16.

Smollett’s release came just days after Judge James Linn sentenced the “Empire” actor to 30 months felony probation, including 150 days in jail, for lying to law enforcement officers about an alleged January 2019 racist and homophobic “hate crime” of which he claimed to be the victim.

The 39-year-old actor’s release came in response to an appeals court order that Smollett be allowed to go free pending appeal of his conviction.

According to The Chicago Tribune, “The only explanation offered in the order was that Smollett has never been convicted of a violent offense and would have completed his sentence of incarceration well before his appeal is decided.”

Smollett’s fabricated hate crime, in which he claimed he had been chased and beaten by a duo of Trump-supporters in deeply Democrat Chicago who shouted, “This is MAGA country,” yelled racial and homophobic slurs (Smollett is homosexual and black), and placed a noose around his neck, drew national attention and contributed to racial tensions throughout the United States.

In December 2021, a jury found the actor guilty of faking the elaborate story and continually lying to police.

During sentencing last week, Judge Linn called Smollett “profoundly arrogant and selfish and narcissistic,” and said he was “just a charlatan pretending to be a victim of a hate crime, and that’s shameful.”

For his part, Smollett has consistently denied that he staged the hoax.

After his sentencing, Smollett once again stated he was innocent and bizarrely insisted that he was “not suicidal.”

The actor’s attorneys have argued that they sought his early release from jail partly due to concerns for his safety behind bars. However, the office of the special prosecutor said it was “factually incorrect” to assert Smollett was in any danger, noting that he was being held in protective custody.

Smollett’s hoax adds to a long list of alleged “hate crimes” against political liberals or sexual, racial, or religious minorities which have sparked national outrage but later fizzled out after they were revealed to have been fabricated.