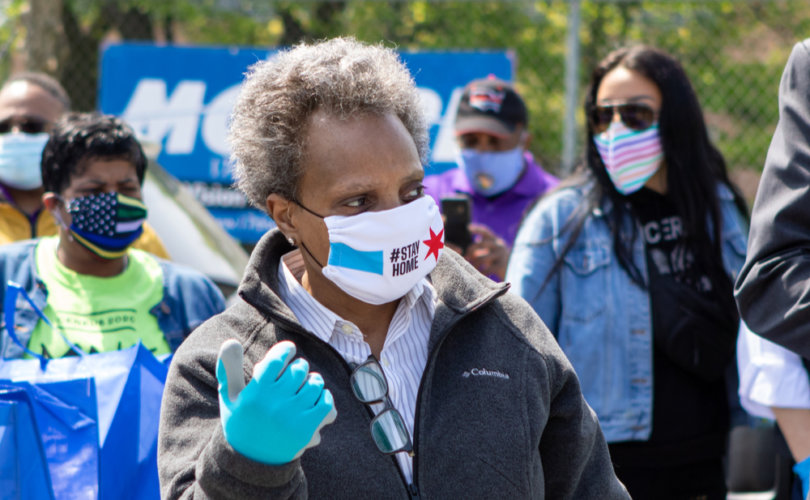 CHICAGO (LifeSiteNews) – The leftist homosexual mayor of Chicago doubled down on her recent vulgar statements against Justice Clarence Thomas.

“If you read Clarence Thomas’ concurrence …  f*** Clarence Thomas,” Lightfoot said at a “pride” march event the weekend immediately following the June 24 reversal of Roe v. Wade. “If he thinks we are going to stand idly by while they take our rights….”

Justice Thomas wrote in a concurring opinion in Dobbs v. Jackson Women’s Health Organization that past Supreme Court cases that relied on “substantive due process,” should be revisited, such as rulings that legalized sodomy, same-sex “marriage,” and contraception nationwide.

She doubled down on those comments when pressed by a conservative radio commentator about her criticism of the “toxicity in public discourse.” Lightfoot made those comments in response to attacks on police officers.

“That says to me that the people who are acting so brazenly have no not only no respect for themselves, but they don’t have respect for the institution like the police department, who men and women every single day on every watch, are literally risking life and limb for our safety,” Lightfoot said on July 5. “But toxicity in our public discourse is a thing that I think we should all be concerned about, right?”

“That’s the thing I think that concerns me the most about what we’re seeing, really over the arc of these last two years – I get it. People are angry. They are frustrated. And they’re fearful,” Lightfoot said in reference to the shooting in Chicago suburb Highland Park at a 4th of July parade. “But we can’t let those things mean that we lose sight of each other’s humanity. We’ve got to find a common sense and a purpose.”

“People thought that you were adding to the ‘toxicity in our public discourse,'” Amy Jacobson asked Lightfoot.

Mayor Triple Threat explains to @AmyJacobson that leading a crowd chanting “F*ck Clarence Thomas” is not an example of the toxic rhetoric coarsening our public discourse she’s otherwise very worried about.

“No, I agree, I stand by my comments to both [Lightfoot also was asked about saying ‘F*** Donald Trump],” Lightfoot said.

“Clarence Thomas is a hypocrite, who should never have been confirmed, and the fact that he is using his platform on the Supreme Court to blithely act like he can just erase our rights with a stroke of the pen, I stand by my comments,” she said.

Lightfoot has frequently resorted to harsh rhetoric against people with whom she disagrees.

“To my friends in the LGBTQ+ community—the Supreme Court is coming for us next. This moment has to be a call to arms,” she tweeted on May 9, in response to the leak of the Roe reversal decision.

She instituted a vaccine mandate in the city, which required citizens to show their jab papers to eat in a restaurant or go to a theatre and inside other public businesses.

“To put it simply, if you have been living vaccine-free, your time is up. If you wish to live life as w/the ease to do the things you love, you must be vax’d,” Lightfoot wrote in a tweet on December 21. “This health order may pose an inconvenience to the unvaccinated, and in fact it is inconvenient by design.”