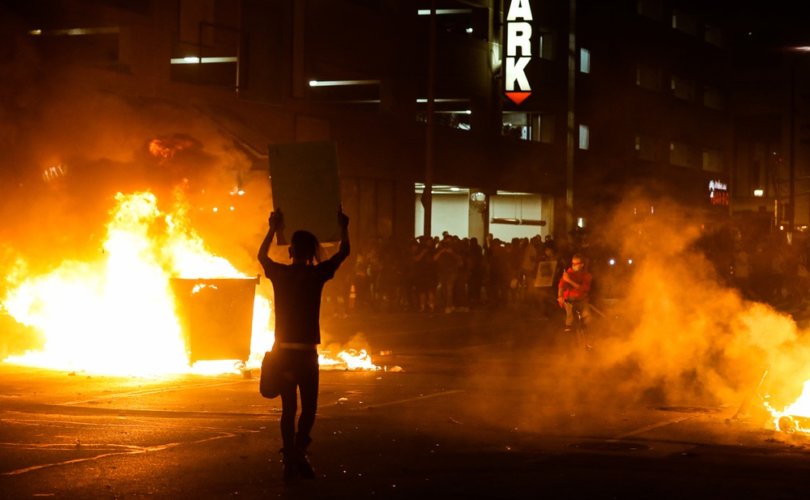 June 4, 2020 (LifeSiteNews) — While civil authorities had ordered churches and many businesses across the USA, Canada, and Great Britain to be closed due to coronavirus fears, many of the same authorities are surprisingly condoning the recent mass protests — that include thousands of people standing closely together — that came after the killing of George Floyd while in police custody.

Millions of people across the world have been ordered to shelter in place since late March because of fears that the COVID-19 coronavirus, which originated in Wuhan, China, would otherwise kill hundreds of thousands and overwhelm national health systems. So far, the world death toll from the virus is reported to be about 380,000. Citizens found outside their homes without a good reason have been challenged by police and in some cases fined.

But now, as both peaceful protests against racism and violent rampages are attracting enormous crowds across the United States, in Canada, Great Britain, and some European countries, public health officials have undergone a change of heart.

On June 2, Slate magazine published arguments to support the mass demonstrations on the grounds that they “address the paramount public health problem of pervasive racism.” An open letter signed by over a thousand public health professionals, infectious disease experts, and “community stakeholders” states that “white supremacy is a lethal public health issue that predates and contributes to COVID-19.”

“Open letter advocating for an anti-racist public health response to demonstrations against systemic injustice occurring during the COVID-19 pandemic” supports such “public health best practices” as staying at home. However, its signatories refuse to condemn the ongoing protests as risky for coronavirus transmission.

“We support them as vital to the national public health and to the threatened health specifically of Black people in the United States,” they wrote.

On June 1, NPR published remarks by Dr. Elaine Nsoesie, an assistant professor of global health at Boston University, in which she acknowledged that non-white people have been “disproportionately affected by COVID-19 in many states.” However, she also stated that racism is one of the reasons for this disparity. Nsoesie said that wherever there is a gathering, there is a risk of transmitting the coronavirus, but that “risk of transmission is lower in open spaces.”

NPR also published advice for demonstrators to lessen their chance of catching the disease, some of which was also in the Open Letter. Such advice included wearing a face covering, remaining with a small group, staying six feet away from other groups, and not yelling.

Dr. Anthony Fauci, the face of the public response to the coronavirus epidemic in the United States, has refused to condemn the nationwide breach of lockdown rules. In fact, he dodged answering a question about the protests and riots in a recent interview, focusing instead on leisure activities.

“We’ve seen pictures, photos and TV clips of people very much congregated, no masks, together, very closely congregated on a boardwalk, on a beach, in a pool,” Fauci said in a June 2 interview with the Journal of the American Medical Association (JAMA).

“That has been and continues to be a concern to me.”

The Daily Wire noted yesterday that hospital workers have come outside to applaud the recent crowds of demonstrators, even though they opposed the anti-lockdown demonstrations earlier this spring.

Yesterday, New York’s Mayor Bill de Blasio suggested that the needs of the demonstrators were of a higher order than those of the financially at-risk shopkeeper or people who want to go to church.

According to Breitbart, de Blasio responded to a question about different rules for different people by saying he wished people would stay at home but that “400 years of American racism” had caused a crisis.

“But this is the other piece of the equation, when you see a nation, an entire nation, simultaneously grappling with an extraordinary crisis, seated in 400 years of American racism,” he said.

“I’m sorry, that is not the same question as the understandably aggrieved store owner or the devout religious person who wants to go back to services.”

Health authorities in Canada were also reluctant to discourage the mass protests organized in Canada after the American tragedy. Canada’s health minister, Patty Hajdu, seemed to actively encourage them this Monday.

“Gathering together is a very powerful way to lend that support and to be an ally,” she said. “There are ways to do it more safely.”

Acknowledging that social distancing is difficult when protesting, Hajdu encouraged the demonstrators to wear masks and use hand-sanitizer.

Theresa Tam, Canada’s public health chief, also encouraged the public protests, asking only that demonstrators consider using noise-makers instead of shouting so as not to spread infection.

“Shouting and that type of behaviour can potentially project more droplets,” she said. “Be considerate of others. People are out to protest to support a common goal.”

“As people are coming together to rightfully and respectfully protest, it’s absolutely necessary and important, but we still need to understand following public health protocols around social distancing, masking, etc., are still critically important,” Strang said.

According to CTV News, Savage said he had got police to block off space for demonstrators so they would have more room and that he had asked them to wear masks.

CTV noted that Halifax remains in a state of emergency. People are supposed to remain six feet away from those outside their households and not gather in groups of more than 10. However, Savage suggested that the protests were just as important as stopping the spread of the virus.

“Certainly, it's a concern in a group that size, but it's also a very big concern when somebody dies with a knee on their neck and that has to bring some kind of response as well,” he said.

“I was pleased to see most of you in masks,” he said. “It would have been better if we were able to self-distance yourself, but you were respectful of one another, you were peaceful, and you made your point very clear.”

America’s rallies and riots have also inspired protests in Great Britain. Yesterday, Labor M.P. Barry Gardiner tweeted the news that he had joined a demonstration outside the Houses of Parliament. He did this despite having joined in widespread shaming of Conservative government adviser Dominic Cummings for allegedly breaking lockdown rules. Cummings (no relation to the author of this article) traveled long distances earlier this spring to visit his extended family; he argued that he did so to secure care for his child.

Gardiner tweeted the following on June 3: “Been social distancing since March. Today I broke it to join the #BlackLivesMattter demo outside Parliament and take a knee with thousands of brave young people calling for Justice.”

He was swiftly rebuked by Brexit Party leader Nigel Farage, who tweeted, “You total hypocrite Barry Gardiner, you attack Cummings 4 times and then ignore social distancing to join a protest that then became a violent mob. Perhaps you should resign.”

The contrast between the reaction to Cummings’s controversial travel last month and the encouragement of the recent protests in London had already been noted on June 2 by journalist Brendan O’Neill.

“All the things said about Dominic Cummings — that he shattered the lockdown, that he thinks it's one rule for him and another for everyone else — are far truer of those protesting at the big Black Lives Matter demo in Trafalgar Square on Sunday, than they are of Cummings,” O’Neill wrote for the Spectator.

“The demo’s message was clear. It shouted to the nation that the virtuous and right-thinking are more important than the rest of us,” he continued.

“Their views and their rights count for more than ours. So while people will be shamed for sitting on a beach or taking part in VE Day celebrations, those who have the right opinions can press the flesh in a huge public gathering with seeming impunity.”

The head of London’s Metropolitan Police, Cressida Dick, has admitted that police were frightened of trying to enforce the lockdown in the face of the George Floyd protests. According to a June 2 article in the Guardian, Dick asked reporters to put themselves in the shoes of the commander, who has to decide how to police passionate crowds.

“And judgments have been made, that people are out in such numbers, feeling so strongly, and are refusing to disperse when asked, that the officers have formed the view that if they were to try at that stage, with those sorts of numbers, to enforce en masse, we probably would have ended up with very serious disorder and a bad situation, a difficult situation, a challenging situation for everybody, turning into a violent situation,” she said

“So, these are the sorts of risks that public order commanders have [to assess].”

The Black Lives Matter rallies continued in London yesterday. Although these protests were mostly peaceful, two Australian journalists were menaced, a group of police officers were physically attacked, and a small band of protesters were filmed throwing barriers and glass bottles at the prime minister’s residence on Downing Street.

“Everything we know about history tells us that once you do that, you may not escape the mob,” he told Steven Edginton of the Sun.

Murray contrasted the shaming of the past two months for people who were tempted to visit their parents or sunbathe despite the coronavirus with Sunday’s sudden apparent “exemption” to protest a police killing in another country.

“Oh, but the exception is if a Minneapolis police officer does something appalling. And then you can come out in your thousands because then there’s an exception.”

What the impact of the London protests will have on the nation’s coronavirus epidemic cannot be known for two or three weeks. However, today it was reported that the United Kingdom has experienced more recent coronavirus deaths than the entire European Union combined. Face coverings on public transport will be made mandatory on June 15.

Has the “moral scolding” ceased?

It is clear that those who point out the disparity between the shaming for people who broke lockdown rules before George Floyd’s death and the encouragement of mass protests now run the risk of being called racist.

When author JD Vance tweeted that he was “amazed at how quickly the moral scolding ceased as soon as elite-favored protests began taking place,” he was condemned by several other Twitter users. He was accused of being “morally bankrupt,” “sad,” “misguided,” and “a marketing campaign for genteel racism.”

However, Twitter has been kinder to those who report having lost relatives to death during the pandemic and being unable to say goodbye or give them the funerals they wanted thanks to the lockdown.

George Floyd, a Houston native who moved to Minneapolis after serving a five-year prison sentence for armed robbery, died on May 25 as a police officer, Derek Chauvin, knelt on his neck. Bystanders filmed Floyd begging for his life before he died.

The footage horrified people in several countries, leading to protests throughout the United States and in Canada, Britain, and Europe. At times the protests have become violent, leading to looting, arson, assault, and murder. Retired police chief David Dorn, 77, was killed defending a pawn shop in St. Louis, Mo.