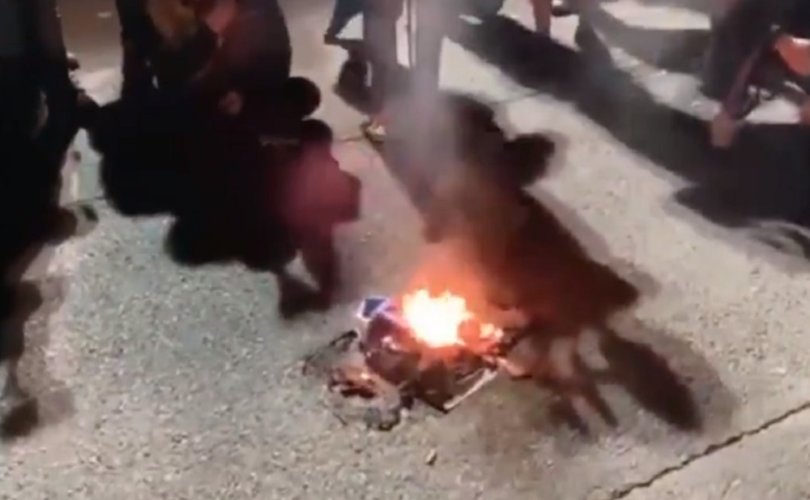 U.S. senator Ted Cruz from Texas took to Twitter, commenting, “This is who they are.”

Donald Trump, Jr., the son of the president, said, “Now we move to the book burning phase. I’m pretty sure ANTIFA doesn’t actually stand for what they say it stands for. Maybe just remove the anti part of them [sic] name and it’s perfect.”

“Antifa” is short for “anti-fascism.” The group espouses far-left ideologies like anarchism and Marxism. The movement is also using violence to achieve its goals.

“Are we still pretending that ANTIFA isn’t simply a group of actual Fascists?” Trump added later. He also retweeted another user questioning “what burning the Bible has to do with protesting against police brutality.”

“Do not be under the illusion that these protests and riots are anything but an attempt to dismantle all of Western Civilization and upend centuries of tradition and freedom of religion,” wrote Ian Miles Cheong.

The Portland protests have turned violent on numerous occasions, with President Donald Trump sending in federal troops to restore order.

Portland could be an increasingly dangerous place not only because of the riots, but also because police are not properly funded.

“In order to solve the crimes, [chief of police Chuck] Lovell said the bureau pulled detectives and officers from an ‘already diminished patrol’ unit to help investigate and follow up on the high number of homicides,” reported local television channel KATU.

Democratic presidential candidate Joe Biden has expressed his openness to partially defunding the police. When asked if he agrees “that we can redirect some of the [police] funding,” Biden responded, “Yes, absolutely.”

Following the death of George Floyd in police custody on May 25, Black Lives Matter protests erupted across the country, with Antifa joining in the riots. Frequently, Christian church buildings and other religious symbols, especially statues, were the target of the rioters’ wrath.

Shaun King, a leading voice in the Black Lives Matter movement, best known for claiming to be half-black despite both parents on his birth certificate being listed as white, declared Monday that statues, murals, and stained glass windows depicting Jesus as white should be taken down for being “form[s] of white supremacy,” meant to be “tools of oppression” and “racist propaganda.”

On May 31, vandals had attempted to burn down historic St. John’s Episcopal Church in Washington, D.C., just across from the White House. Local fire officials said the fire was in the basement, and they managed to put it out before it spread.

In New York, St. Patrick’s Cathedral was defaced with graffiti.

In June, 100 people reportedly helped to topple a statue of the missionary saint Junípero Serra with ropes on Olvera Street in Los Angeles. In a video of the incident, one participant can be heard saying “this is for our ancestors” as the statue comes crashing down.

Natives just tore down the statue of Junipero Serra at Placita Olvera in solidarity with #BLMprotest #antiracism #antislavery pic.twitter.com/8ZDdv7vej7

In Golden Gate Park, San Francisco, activists pulled down another statue of St. Junípero Serra. A video of the incident shows those in attendance cheering as the statue is toppled. One person can be seen hitting the statue with fists and another person hitting it with a skateboard once it has fallen to the ground.

The Black Lives Matter organization, officially known as “BLM Global Network Foundation,” is advocating for positions contrary to what Christians believe. The organization supports abortion, writing, “We deserve and thus we demand reproductive justice that gives us autonomy over our bodies and our identities while ensuring that our children and families are supported, safe, and able to thrive.”

The term “reproductive,” usually used in combination with “health” or “rights,” is a euphemism for abortion and contraception.

Additionally, the organization wants to abolish the traditional family.

“We disrupt the Western-prescribed nuclear family structure requirement by supporting each other as extended families and ‘villages’ that collectively care for one another, especially our children, to the degree that mothers, parents, and children are comfortable,” the group wrote in its mission statement.

Black Lives Matter is also in favor of homosexuality and gender ideology. “We foster a queer‐affirming network. When we gather, we do so with the intention of freeing ourselves from the tight grip of heteronormative thinking, or rather, the belief that all in the world are heterosexual (unless s/he or they disclose otherwise).”