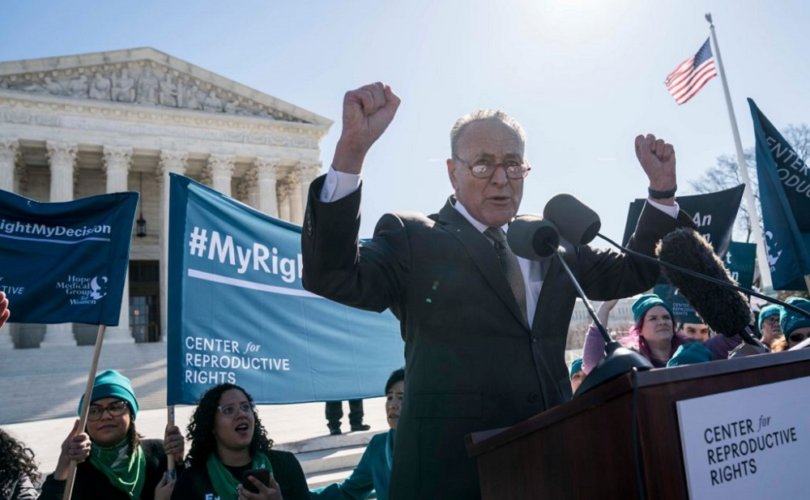 (LifeSiteNews) – Pro-lifers are arguing that left-wing threats to Supreme Court justices who may be about to overturn Roe v. Wade are not surprising in light of inflammatory rhetoric on the issue from left-wing leaders.

Last December, the Court began consideration of Dobbs v. Jackson Women’s Health Organization, which concerned Mississippi’s HB 1510 law banning abortions from being committed past 15 weeks for any reason other than physical medical emergencies or severe fetal abnormalities. After its enactment in 2019, the Fifth Circuit Court of Appeals deemed HB 1510 unconstitutional because of an “unbroken line dating to Roe,” the 1973 ruling which imposed on all 50 states a “right” to pre-viability abortion.

It remains unclear whether the draft represents a final decision to overturn Roe, a tentative decision subject to change, a document prepared in anticipation of a majority to overturn, or was written in hopes of persuading Alito’s colleagues to sign on.

Regardless, the leak has sent shockwaves across the political spectrum, with pro-lifers tentatively rejoicing, pro-abortion politicians and activists lashing out in anger, and many speculating that the leak may have been intended to pressure judges to flip their votes, or to incite hatred and threats against them.

So far, such threats include Twitter-verified copywriter Simon Gwynn posing a “thought experiment” about when would be the ideal time “to kill Clarence Thomas and Samuel Alito” and publicizing the home addresses of Supreme Court justices.

The leak was also met with screaming protesters gathered outside the Supreme Court, who shouted things like “if we don’t get it tear it down,” and at points got physical against pro-life counter-demonstrators.

In light of these events, some have recalled comments Senate Majority Leader Chuck Schumer made in March 2020, on the steps of the Supreme Court: “I want to tell you, Gorsuch. I want to tell you, Kavanaugh. You have released the whirlwind and you will pay the price! You won’t know what hit you if you go forward with these awful decisions.”

Those words elicited a rare rebuke from moderate Chief Justice John Roberts,  who said that “threatening statements of this sort from the highest levels of government are not only inappropriate, they are dangerous.”

“Who or what would hit the two justices — and how exactly?” wondered historian Victor Davis Hanson this week, who noted that the “hard left had detoured from the mainstream of American voters onto a radical trajectory. So it will never find 51% public approval for any of its current extremist and crackpot initiatives. Instead, it sees success only through altering the rules of governance or changing the demography of the electorate — or both.”

@SenSchumer, @POTUS and ALL Democrat office holders need to denounce these efforts to physically intimidate and threaten Justices. Going to homes to “protest” has no place in the public square. Shame on them.

Will be curious to find out which far-left dark money terrorists are paying protestors to threaten Supreme Court Justices AT THEIR HOMES.

Remember that Chuck Schumer once threatened Justices from the steps of the Court.

Now his allies are following through. https://t.co/2moOf3puRm

This week, Schumer said the leaked opinion marked a “dark and disturbing day for America, and that the prospect of returning abortion to the democratic process was an “abomination.”

If Alito’s opinion does prove to be the Supreme Court’s final decision, its ramifications will be drastic. More than twenty states currently have laws on the books that would effectively ban abortion within their borders upon Roe’s fall, from pre-Roe abortion bans that went unenforced through to “trigger laws” designed not to take effect until a ruling like today’s. In those states, abortion would become illegal as soon as the ruling is issued.

More than a dozen other states plus the District of Columbia have laws on the books legally protecting abortion, at least three of which explicitly codify the practice as a “right.”

Abortion would remain legal in those jurisdictions, as well as the remaining states that have not spelled out abortion’s status one way or another, but without Roe state residents would have the power to vote on the issue for themselves, or lobby their elected representatives to change the law in either direction. Pro-lifers in Congress could pursue a nationwide abortion ban, as well.