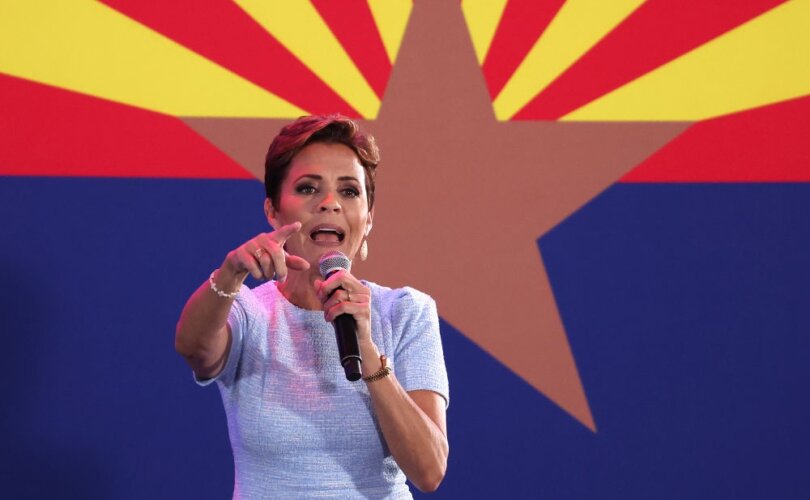 Arizona Republican gubernatorial candidate Kari Lake speaks during a get out the vote campaign rally on November 5 in Scottsdale, Arizona. Photo by Justin Sullivan/Getty Images

(LifeSiteNews) — A left-wing Twitter account got a different answer than it may have been fishing for when it asked respondents whether Trump-endorsed Republican gubernatorial candidate Kari Lake should concede her reported loss to Democratic challenger Katie Hobbs.

On Monday, the self-proclaimed “Anti-Trump” Twitter account Trending Liberal, which says its mission is to “stop the MAGA insanity,” ran a poll asking Twitter users whether they think Lake should concede the Arizona governor’s contest.

Over 100,000 accounts responded, with an overwhelming majority (76.6%) saying Lake should not concede.

Trending Liberal had launched its poll Monday in response to a recent video by Lake in which she condemned the “chaotic” handling of Arizona’s election.

According to the Republican gubernatorial candidate, the election process “was botched and broken beyond repair.”

“Attorneys are working diligently to gather information. Whistleblowers are coming forward, and the curtain is being lifted,” Lake said in the video. “Whether done accidentally or intentionally, it is clear that this election was a debacle that destroyed any trust in our elections.”

In the video message, Lake promised Arizonans she “will continue fighting until we restore confidence and faith in our elections.”

As LifeSiteNews reported, election boards in two Republican-led Arizona counties this week delayed certification of their election results over election integrity concerns. The Arizona Republican Attorney General’s office has requested that officials in Arizona’s scandal-plagued Maricopa County submit a report regarding how it handled the election after between 20% and 48% of the county’s election locations experienced voting machine issues on Election Day.

According to the letter, the attorney general’s office “has received hundreds of complaints since Election Day pertaining to issues related to the administration of the 2022 General Election in Maricopa County.”

Lake suggested last week that she would challenge the results of the narrow election after media outlets declared Hobbs the winner.