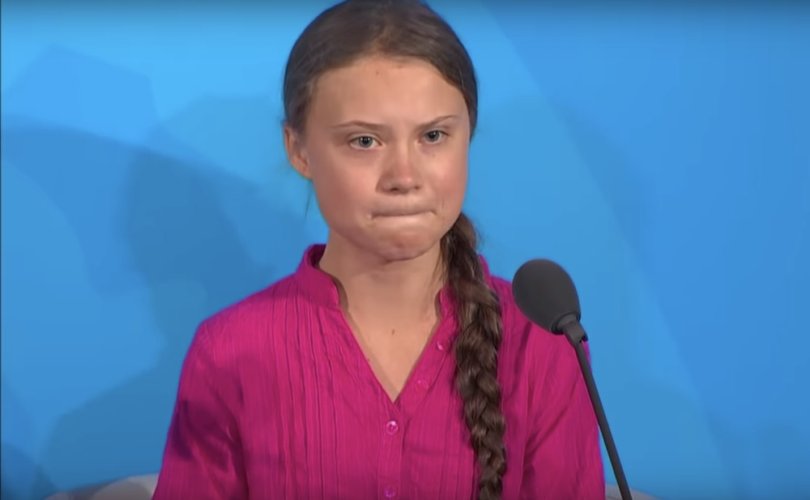 NEW YORK, September 24, 2019 (LifeSiteNews) – The United Nations held a Climate Action Summit on Monday, the highlight of which for most observers was an impassioned speech by Swedish teenager Greta Thunberg.

The 16-year-old Thunberg gained global recognition last year after going “on strike” from attending school to protest government inaction on climate change outside the Swedish Parliament, an action that inspired the global “Youth Strike 4 Climate” movement. “She has also been nominated for an international prize for her activism and recently met with the U.N. Secretary General at the COP24 climate summit in Poland,” TIME Magazine noted while naming her one of 2018’s “most influential teens.”

During Monday’s summit, Thunberg warned world leaders that young people will “be watching you.”

“This is all wrong,” she said. “I shouldn't be up here. I should be back in school on the other side of the ocean. Yet you all come to us young people for hope. How dare you! You have stolen my dreams and my childhood with your empty words.”

“And yet I'm one of the lucky ones,” Thunberg continued. “People are suffering. People are dying. Entire ecosystems are collapsing. We are in the beginning of a mass extinction, and all you can talk about is money and fairy tales of eternal economic growth. How dare you! For more than 30 years, the science has been crystal clear. How dare you continue to look away and come here saying that you're doing enough, when the politics and solutions needed are still nowhere in sight.”

The self-described “angry” teen lambasted popular proposals to reduce carbon emissions as inadequate to prevent “irreversible chain reactions beyond human control,” and accused the adults in the room of not being “mature enough to tell it like it is.”

“You are failing us,” Thunberg declared. “But the young people are starting to understand your betrayal. The eyes of all future generations are upon you. And if you choose to fail us, I say: We will never forgive you.”

Former President Barack Obama declared Thunberg to “one of our planet’s greatest advocates.” CNN called her the “teenage old soul of the climate crisis.” Left-wing media outlets from TIME to BuzzFeed to Ms. Magazine have labeled her latest speech “powerful,” and dismissed critiques of her claims as coordinated and misogynistic.

Nevertheless, the scientific picture is substantially different than what Thunberg described.

While left-wing activists are heavily invested in the idea that anthropogenic global warming (AGW) — the view that human activity rather than natural phenomena is primarily responsible for Earth’s changing climate — is an established phenomenon, AGW proponents suffered a blow in 2010 with the discovery that their leading researchers had engaged in widespread data manipulation, flawed climate models, misrepresentation of sources, and suppression of dissenting findings.

Further, contrary to Thunberg’s claim that “people are dying” due to climate change, data from the International Disasters Database show that “climate related deaths” (i.e., deaths due to floods, droughts, storms, wildfires, and extreme temperatures) have dramatically and steadily declined since the 1920s.

In March, Greenpeace co-founder Patrick Moore called AGW alarmism a “complete hoax and scam,” a “kind of toxic combination of religion and political ideology” that is “as bad a thing that has happened to science in the history of science.”

In addition to disputing her claims, many expressed concern over climate activists’ use of Thunberg in light of not only her youth but her mental history.

According to a March Guardian profile, Thunberg began suffering from depression at age eight, partly due to what she was hearing about climate change, and in the following years was diagnosed with selective mutism and Asperger’s, a form of autism associated with “extreme focus on a topic of interest” and “trouble imaging what other people are thinking or feeling.”

“I stopped talking. I stopped eating,” she explained in a 2018 TEDx talk. “In two months, I lost about 10 kilos of weight. Later on, I was diagnosed with Asperger's Syndrome, OCD, and selective mutism — that basically means I only speak when I think it's necessary.”

Many conservatives argued that taking a teenager vulnerable to fearful rhetoric about mass death and destruction and feeding those fears by making her a global mouthpiece amounts to child abuse:

This is heartbreaking and disturbing to me. Environmental activists and her crappy parents have stolen her childhood, not capitalism and the UN. https://t.co/FLw8CXvLps

I’m old enough to remember when purposefully intensifying an autistic child’s fears and parading them around in front of cameras for selfish means was rightly considered child abuse, but I guess it only counts if it’s stage mothers at child beauty pageants in the south. https://t.co/o91H0u2gET

As a Swede, I want to apologize to the world for our radical left that has taken this young girl hostage and is exploiting here for their own crazy agenda. She will need a lot of support in the future to handle what she is going through.

They're using her as their avatar because they can twist any refutation of her wild claims into an “attack” on a child.

This kid is on the autism spectrum, manipulating her emotionally like this is flagrant abuse.

She is being compelled into corners her mind has difficulty navigating, and does nothing but feed her fears (of literal death), and frustration that her mind's eye does not square with the messy, grey, emotional world. Apregers sufferers must learn to navigate these areas. /13

“The climate hysteria movement is not about science,” Daily Wire contributor Michael Knowles said Monday night on Fox News. “If it were about science, it would be led by scientists rather than by politicians and a mentally ill Swedish child who is being exploited her parents and by the international left.” Fox News subsequently apologized for the segment and said it has “no plans” to book Knowles for future segments.