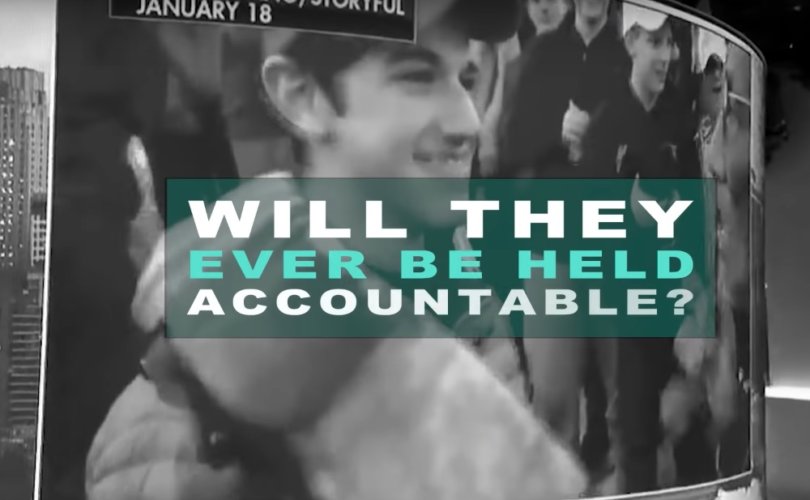 January 8, 2020 (LifeSiteNews) — Left-wing observers aren’t taking kindly to the news that CNN agreed to a settlement of the defamation suit brought by pro-life teenager Nick Sandmann, rather than defend its coverage of the 2019 March for Life at trial.

Immediately after last year’s March for Life in Washington, D.C., the press erupted with claims that a video showed boys from a Catholic school in Kentucky harassing Nathan Phillips, a Native American activist, outside the Lincoln Memorial. But additional extended video, and firsthand accounts soon revealed that Phillips was the one who waded into the group waiting for its bus and decided to beat a drum inches from Sandmann’s face, while the boys had merely performed school cheers in hopes of drowning out racist taunts from members of the Black Hebrew Israelites fringe group.

As additional video came to light, many journalists and other public figures quickly deleted their snap condemnations of the students, while some have either tried to keep the original narrative alive or refused to unequivocally retract or apologize for their initial claims, leading to various lawsuits on behalf of the boys.

Among the challenges was a $250-million suit against CNN for broadcasting into “millions of homes” the “idea that [Sandmann] was part of a mob … yelling racist slurs,” according to attorney L. Lin Wood. But the suit was settled Tuesday for an as yet undisclosed sum. Details of the terms have not yet been revealed, but the Daily Wire reports that various observers have expressed disgust at either the outcome or conservatives’ celebration of it, including CNN and New York Times contributor Wajahat “Abu Khadija” Ali:

The same people who promote the QAnon conspiracy theory, which the FBI says is now a domestic terror threat, the Obama Birther conspiracy, the “Replacement Theory” don't have much high ground to gloat about the Nick Sandmann settlement but when you are without shame…

The same Trump cultists celebrating Nick Sandmann’s victory against the corporate media outlets who smeared him with false accusations from social media mob bullying that generated fake clickbait news articles are strangely silent about all the liberals they falsely accused too.

In the Trump era, you can profit off publicly ridiculing Native Americas like Nick Sandmann or start your own clothing line after killing a child like Eddie Gallagher. Or murder journalists like Mohammad bin Salman & you will have the full support of the POTUS. #TrumpIsADisgrace

Above the Law contributor Joe Patrice claimed that conservatives celebrating the news are either engaged in a “conscious disinformation campaign” or “are just f—— stupid,” because agreeing to a settlement out of pragmatic reasons (such as the financial or public-relations costs of a trial) is not an admission of guilt.

But conservatives have not claimed that CNN has acknowledged its guilt with this decision, and instead simply express their belief that CNN could not have defended its coverage on the merits.

Sandmann’s lawsuits against other individuals and media giants remain pending, including a $275-million suit against NBCUniversal and a $250-million suit against the Washington Post. “This case will be tried not one minute earlier or later than when it is ready,” Wood has declared, while Sandmann’s legal team stresses that the dollar amounts are sought not for the teen’s sake, but to deter the press from smearing others in the future.