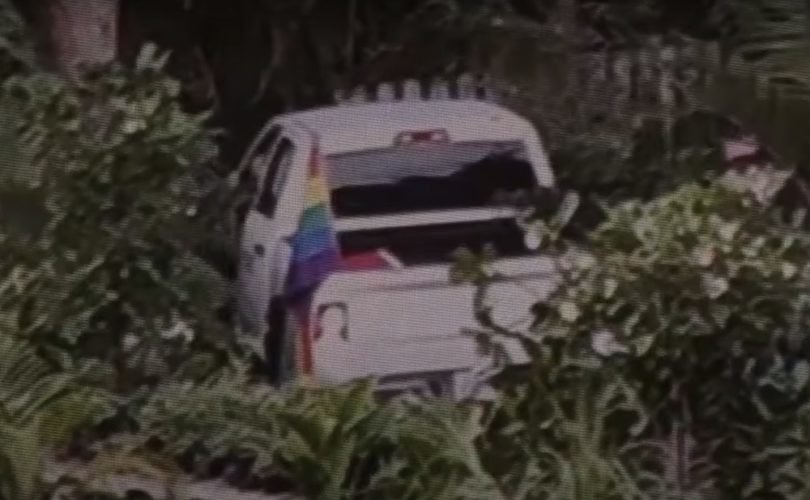 WILTON MANORS, Florida, June 21, 2021 (LifeSiteNews) — A vehicular accident that left one dead and one injured over the weekend during a Florida “pride” parade has been cited by LGBT activists as anti-gay violence, despite the fact that the vicitims and perpetrator were all associated with a group participating in the event.

Local 10 reports that a white pickup truck ran over two members of the Fort Lauderdale Gay Men’s Chorus Saturday evening during the start of the Stonewall Pride Parade. Both were rushed to the Broward Health Medical Center, where one was pronounced dead and the other is expected to survive. The truck also narrowly missed U.S. Rep. and former Democrat National Committee Chair Debbie Wasserman Schultz.

“Our thoughts and prayers are with those affected by the tragic accident that occurred when the Stonewall Pride Parade was just getting started,” chorus president Justin Knight said through a spokesperson. “Our fellow Chorus members were those injured and the driver was also a part of the Chorus family. To my knowledge, this was not an attack on the LGBTQ community. We anticipate more details to follow and ask for the community’s love and support.”

Witnesses report hearing the driver insist the crash was an accident as he was taken away by police. Reuters adds that while he remains unidentified, he has not yet been charged with a crime.

“The driver of the vehicle, a 77 year-old male, was a participant who had ailments preventing him from walking the duration of the parade and was selected to drive as the lead vehicle,” police said.

Despite Knight’s statement being publicly available since Saturday evening, numerous left-wing public figures quickly declared the tragedy an example of right-wing violence, and not all bothered to correct the record afterward:

Saddened and angry at the horrific terrorist attack against the #LGBTQ community at the #WiltonManors #Pride Parade. We won’t stop fighting for equality and justice. Love wins. Hate loses. https://t.co/6x81ZF9jZ5

UPDATE: One man dead, another injured.@orlandosentinel reports “driver and the victims were all members of the Fort Lauderdale Gay Men’s Chorus, according to chorus President Justin Knight.”

“To my knowledge it was an accident,” said Knight.

“This is a terrorist attack against the LGBT community,” said Fort Lauderdale’s Democrat Mayor Dean Trantalis, who had been present at the parade. “This is exactly what it is. Hardly an accident. It was deliberate, it was premeditated, and it was targeted against a specific person. Luckily they missed that person, but unfortunately, they hit two other people.”

Trantalis later claimed he had “feared it could be intentional based on what I saw from mere feet away,” while acknowledging that “as the facts continue to be pieced together, a picture is emerging of an accident in which a truck careened out of control.”

Several, including Miami-Dade County mayor Daniella Levine Cava, Boynton Beach commissioner Ty Penserga, and writer Lesley Abravanel, even declared the accident a deliberate attack while citing the same Local 10 report that contained Knight’s confirmation that the driver was also part of the Gay Men’s Chorus. Cava and Abravanel later acknowledged the truth, albeit without apologizing for their original false claims:

Horrified by this attack on Wilton Manors Pride & devastated by the loss of life during what should be a celebration of love in the heart of South Florida’s LGBTQ community. Praying for the families of the victims & thinking of my friend @DWStweets. https://t.co/wl6QADgIoe

Grateful to learn this was not a malicious attack. I'm grieving with the families of the victims and all impacted by this horrible accident.

My heart aches with all of my friends and the entire LGBTQ+ community. I’m saddened and angered by this heinous attack and we will not rest until justice is served. Be strong, my friends. https://t.co/8Wvq61ZzRq

Update to extinguish the swarm of bots: was not domestic terrorism made legal by Trump afterbirth #KimJongRon #DeathSantis, but Florida is on edge because of that law and other divisive DuhSantis disasters. May the life lost Rest In Peace and may Floridians feel safe despite Ron

Despite the facts of the case, some also used the accident as an occasion to attack DeSantis (a potential contender for the Republican presidential nomination in 2024) for signing legislation in April that, amid strengthening penalties for riot-related offenses, grants immunity from civil suits to people who drive through protesters blocking a public road, while leaving such motorists vulnerable to criminal charges depending on the facts of the case.

The pro-LGBT movement has a long history of falsely claiming to be disproportionate targets of political violence dating back to the 1978 murder of San Francisco Supervisor Harvey Milk, who has been lionized in pop culture as a gay-rights martyr despite the fact that the man who shot him was a disgruntled ex-colleague whose motives had nothing to do with Milk’s sexuality (fellow city supervisor Dan White, who blamed Milk for blocking him from getting his job back).

More recently, various Democrats and LGBT issues have claimed America is in the midst of a “transgender murder epidemic,” based on a list of victims compiled by the left-wing Human Rights Campaign (HRC). In fact, several of the entries on HRC’s list fail to identify a motive for the killings, and when compared to the United States’ overall murder rate, gender-confused Americans are — if anything — murdered at a lower rate than the general population.