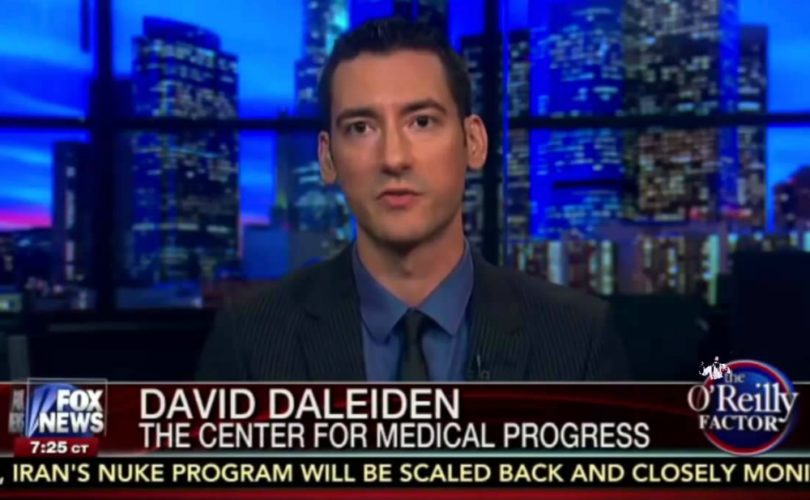 SAN FRANCISCO, December 18, 2015 (LifeSiteNews) – Attorneys representing the Center for Medical Progress will face off this morning across a federal courtroom from lawyers for the abortion lobby seeking to silence their clients and stop the release of videos that expose controversial, and possibly illegal, practices.

The National Abortion Federation (NAF) already has a temporary restraining order forbidding CMP from publicly releasing undercover footage of NAF's 2014 annual conference. In a federal court in San Francisco this morning, it will ask to make that ban permanent.

CMP believes the demand is a form of “prior restraint,” an attempt to censor its message before it can even be heard, and that violates the First Amendment.

The NAF lawsuit is “nothing less than illicit censorship — a prior restraint at war with our fundamental notions of free speech and freedom of the press,” said Tom Brejcha, president and chief counsel at the Thomas More Society, which is representing CMP in U.S. District Court this morning.

But NAF says that everyone who attended its annual conventions had to sign a form promising confidentiality – something CMP did in 2014 and 2015 while posing as the biological research firm BioMax Procurement Services, LLC. CMP signed away its right to disclose NAF's proceedings, its lawyers contend.

But David Daleiden told the court that the non-disclosure agreement he had to sign to host an exhibit at the 2014 National Abortion Federation's annual convention “was too broad, vague, and contradictory to be enforced.”

“No non-disclosure agreement is valid in the face of illegal activity,” he added.

And illegal activity is exactly what he says he found, as abortionists seemed enthused by the opportunity to make a profit from the sale of aborted human organs and tissue, a federal felony. “Because there is usually no cost to the abortion provider, no reimbursement is allowed by law,” Daleiden told the court. “Yet even so, we had many conversations with NAF attendees and personnel about paying abortion providers $50, $60 or more for desired fetal tissue specimens.”

He says that gives him the right to publicly release all the damning footage involving NAF abortionists.

It's evident why NAF, a national abortion lobby, would seek to prevent release of the embarrassing footage. In addition to discussion about fetal organ trafficking, Daldeiden filmed abortionist Dr. Lisa Harris telling her approving colleagues that “killing” is “the most important thing I could do with my life,” and abortion facility owner Renee Chelian saying that burning aborted babies' bodies to generate electricity is “a great idea.”

In October, a hacker obtained 11 undercover videos of the 2014 NAF conference and posted them on the website WeGotNews.com. Now, NAF has demanded that editor-in-chief Charles Johnson reveal his sources, something he refuses to do.

The organization says the release violates a California judge's restraining order – but Johnson says he is not party to the order, which was only issued against CMP officials.

“Neither CMP nor I have disclosed publicly or caused to be disclosed publicly any of the information or the documents or recordings obtained at NAF meetings,” Daleiden swore in a personal declaration before the court. He said he has turned the NAF videos over to law enforcement officials in Texas and California, and responded to a Congressional subpoena with judicial permission.

Targeting journalists proves that NAF intends to chill free speech, Brejcha warns. “As any other investigative journalist working for ABC, NBC, CBS, Fox News, or your local print or electronic media outlet may regularly resort to undercover journalism tactics to ferret out hidden crime, so too David Daleiden should have the right to penetrate the criminal underworld of America’s abortion providers and report all the evidence he has uncovered of criminal wrongdoing to law enforcement and to members of the public.”

“NAF's lawsuit would impose a court-ordered veil of secrecy over the evidence of criminal misconduct in baby parts trafficking which Daleiden uncovered and captured on video and audio tape at NAF conventions, as uttered by NAF members and convention attendees,” Brejcha said. “Thus the true aim of NAFs lawsuit is not justice, but rather the obstruction of justice!”

The journalist who leaked Planned Parenthood videos needs your help