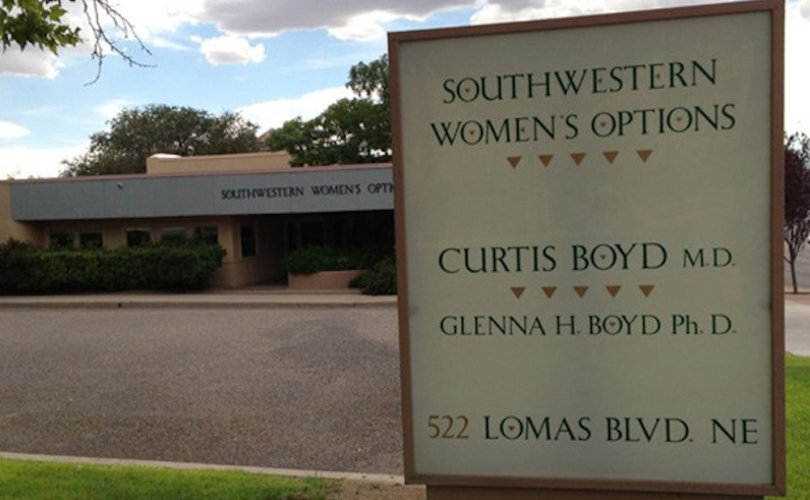 ALBUQUERQUE, New Mexico, September 13, 2017 (LifeSiteNews) — A New Mexico state representative has appealed to the U.S. Attorney General to keep a pro-life criminal investigation alive before its statute of limitations is up.

“We fear the investigation is being stalled intentionally to allow the potential violations by these two entities to reach the statute of limitations,” Rep. Pearce wrote.

In response to undercover videos made by the Center for Medical Progress (CMP), both houses of Congress initiated special committees to independently investigate alleged Planned Parenthood illegal activities, such as selling aborted baby parts for profit and altering abortion procedures to obtain “intact,” sometimes heart-beating specimens.

In December 2016 and January 2017, the two national legislative chambers released the results of their yearlong investigation, both concluding criminal collusion between the university and the abortuary.

Rep. Pearce complained that New Mexico Attorney General Hector Balderas received the Congressional reports but has done virtually nothing with them while some of the charges’ statute of limitations expire.

Pearce says the rest of the charges are expiring soon, unless Sessions acts on the evidentiary allegations.

And Pearce noted that while Balderas fails to act, women are dying at Southwestern Women’s Options (SWWO). “On February 4, 2017, a woman tragically died at SWWO facilities after receiving a late-term abortion,” the representative’s letter reads. “This raises more questions about the reckless behavior of the SWWO.”

Pearce pointed out that because it is a well-known, late-term abortuary, women travel from all over the nation to SWWO.  He noted that such interstate commerce makes SWWO’s illegal activity a federal offense.

“In 2016 alone, the National Abortion Federation reportedly referred more than 200 Texas patients to New Mexico for abortion-related procedures. With hundreds of women flocking to New Mexico to receive these dangerous procedures, something must be done.”

In April, Pearce and pro-life leaders met with the Chairwoman of the House’s investigating committee, U.S. Rep. Marsha Blackburn, R-Tennessee, who demanded that Balderas follow up on congressional findings. Balderas responded that the House’s criminal referral was under “investigation.”

“The delay by Balderas’ office seems intentional to protect UNM and SWO from any consequences for their actions, whether it be the illegal sale of aborted baby body parts or their participation and cover-up of death of Keisha Atkins,” Operation Rescue’s Troy Newman said.

“As New Mexico’s ‘top cop,’ Balderas is committing a shocking betrayal the citizens of New Mexico by allowing his ideological cronies in the abortion business to commit crimes without consequence,” Newman continued. “U.S. Attorney General Sessions must do better than Balderas if the rule of law and the lives of women like Keisha Atkins are to mean anything.”

Pearce wants a federal investigation by the country’s highest law enforcement officer. “We formally request your office conduct an investigation on the University of New Mexico Health Sciences Center and SWWO practices related to the Panel’s findings and the unfortunate tragedy mentioned above.”

The “unfortunate tragedy” Pearce referred to is the February death of Keisha Atkins, 23, and its subsequent alleged cover-up.

After receiving an anonymous tip, Abortion Free New Mexico uncovered Keisha's botched abortion death, even though the University of New Mexico's autopsy report concluded her death was caused by pregnancy.

As Operation Rescue described it, evidence from her autopsy shows Keisha developed a systemic bacterial infection during the four-day, late-term abortion procedure at Southwestern Women’s Options. Keisha “died a painful, panic-filled death as the result of complications that could only have resulted from the late-term abortion.”

SWWO specializes in late-term abortions throughout all nine months of pregnancy, and a common complication is infection. The signs of Keisha’s sepsis were already apparent before the abortion was complete, including breathing difficulty. Someone wisely called an ambulance, but SWWO cancelled it and quietly transferred her to the UNM hospital.

At the hospital, Keisha still couldn't breathe and had below base-line oxygen levels despite being on oxygen. She had abdominal cramps, an elevated heart rate, and reduced ventricular function. Her heart failed because of a blood clot in her lungs as the UNM staff tried to remove the already dead body of her baby from her womb.

Nurses tried so hard to revive Keisha that they broke her ribs. They couldn't. She was pronounced dead at 12:10 a.m. on February 4.

Her autopsy, far from revealing that Keisha's pregnancy caused her blood clot, showed evidence that the abortion caused a serious infection leading to her blood clot, according to Operation Rescue. Despite receiving “multiple blood product transfusions” and a Foley catheter balloon to stop massive uterine bleeding, she suffered hemorrhaging in the brain, inside the abdominal cavity, and from the uterus. She also had more than 40 ounces of fluid around her lungs.

Operation Rescue said this was no random blood clot, unrelated to Keisha's abortion, as the autopsy claims. “The UNM cause of death determination is simply not the truth,” the organization said.