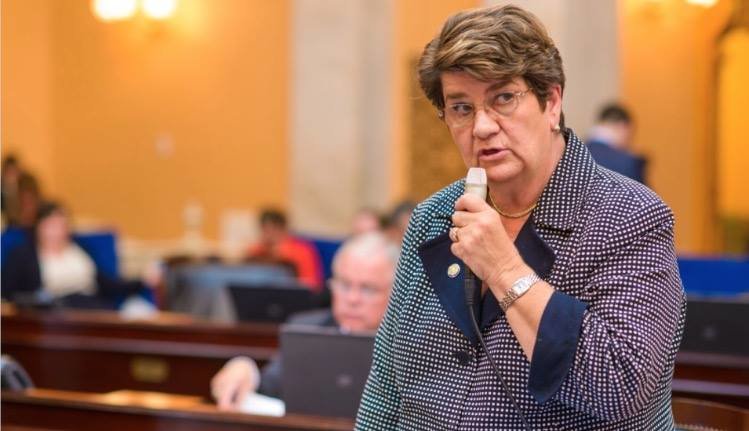 COLUMBUS, Ohio, July 3, 2017 (LifeSiteNews) – An Ohio state senator described holding the “absolutely perfect” head of an aborted baby as she begged her colleagues to vote to ban dismemberment abortion.

Republican Sen. Peggy Lehner recounted a harrowing story from when she worked at a crisis pregnancy center. A couple brought her a shoebox and said they didn't know where else to go.

“They said to me, 'We didn’t know where to go, but our dog was rummaging through the trash in the alley behind our house' – which happened to be the alley behind the local abortion clinic – 'and he brought home in his mouth a – a pad of gauze. And we went to take it away from him and as we did, pieces of a small baby fell onto the floor,'” Lehner said.

“And I opened the box and contained in it was a perfectly formed little head, about the size [that] fits in the palm of my hand,” she continued somberly. “And a torso with one leg hanging from below it. The rest of it was missing. For some reason I reached into the box and I picked up that little head and I put it in my hand and I stared at it. It was unlike anything I had ever seen before: absolutely perfect little face. It had an expression that I cannot describe but one that I will never forget … I can remember to this day how my hand shook feeling that baby resting in my hands.”

Lehner then dismantled pro-abortion arguments about “choice” while urging anyone who is pro-life to support women facing crisis pregnancies.

“If she says 'I’ve been thrown out into the streets, I have nowhere to go,' then our response needs to be, 'then you can come and live with me,'” Lehner suggested. “And I have done that. My kids have been moved over more than once to share a bedroom for a total stranger who needed a place to stay.”

She noted that “over the years I have never had one woman come back to me and say 'why did you talk me out of that abortion? My life has been horrible.' Instead, I have had many women say 'thank God you were there for me.'”

I urge you to vote for this bill today, but I urge you from this day forward to think about what you can really do to turn the abortion crisis around because this nation cannot afford any longer to live with this horrible travesty.”

Earlier during the debate, Republican Sen. Steve Wilson became choked up as he asked his colleagues why they wouldn't support banning a practice that literally rips humans apart piece by piece.

“When you’re talking about a human being in the womb, when you’re talking about the title ‘dismemberment,’ there are limbs on this human being,” he said. “When you talk about a heartbeat, when you talk about a human being that responds to stimulus which means they feel pain, how could you not abolish this procedure? It’s inhumane. And trying to make this issue a man-woman thing – what if the baby in the womb is a woman? Aren’t we looking out for that woman’s rights?”

The bill passed 24 to 9. The Ohio House will vote on it after the summer recess.

Lehner's testimony begins at the 2:05:29 mark in the video below from the Ohio Channel.

1
NFL star Aaron Rodgers blasts Joe Biden, slams ‘witch hunt’ against unvaxxed Americans in ESPN interview
2
The revolution will not be televised, at least not on mainstream media
3
COVID vaccines are a spectacular failure, data show
4
COVID vaccines ‘dangerous and ineffective,’ must be ‘withdrawn from the market’: former NYT journalist
5
US gov’t whisteblowers sound alarm over increases in miscarriages, cancer, since COVID shot rollout
Subscribe to Daily Headlines »