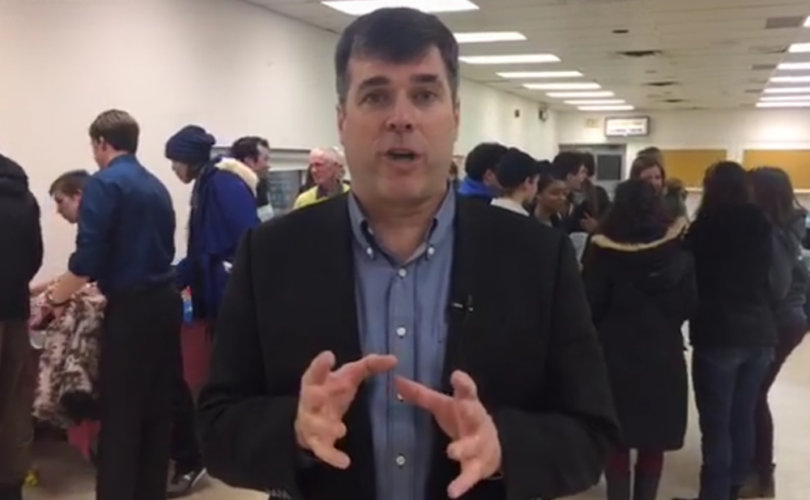 That means not only joining the Conservative Party of Canada by March 28 to vote for a new leader but asking other social conservatives to do the same.

“There’s actually a lot at stake here, which is why I make this strong appeal,” Lemieux told a crowd in Barry’s Bay earlier this month.

“The struggle that you see in Canadian society over values is taking place in the Conservative Party as well,” he said.

“Under no circumstances should you think that the Conservative Party is immune to political correctness, or that they are immune to encroachment on freedom of speech.”

The two things that will “define the Conservative Party going forward” are the person elected as leader on May 27 and “the composition of the membership.”

Therefore, social conservatives “absolutely must join the Party at this time if you want your voice to be heard.”

A Catholic father of five children and a retired Armed Forces lieutenant colonel, the 53-year-old Lemieux was a Member of Parliament for Glengarry-Prescott-Russell rural riding near Ottawa from 2006 to 2015.

He and Saskatchewan MP Brad Trost are the only two of 14 Conservative Party leadership contenders endorsed by Campaign Life Coalition.

Pro-lifers told to “sit down and shut up”

Social conservatives have “given up a lot of ground,” Lemieux told the gathering.

“We continually move back,” he said. “And it’s because we have this normal human fear of not wanting to engage, right, and politicians have that same fear.”

After all, pro-life advocates are told routinely: “Oh, is life important to you? Sit down and shut up because it’s not important to us,” noted Lemieux.

Or social conservatives will be granted “the big concession” that “well, you can believe that if you want in your own home or in your church,” Lemieux said.

“But don’t you think for a second that you can step outside and expect to articulate what you believe in or, you know, you’re going to be phobic of some kind, or you’re being intolerant.”

A perfect illustration of this came up during the evening’s Q&A, when Lemieux was asked to respond to Liberal Minister for the Status of Women Maryam Monsef's recent claim that denying access to abortion was “gender-based violence.”

That a minister of the crown would use such language is “outrageous,” Lemieux said.

“Look at the terminology. Is that meant to intimidate you and kind of push you back? Now you are an instigator of violence if you happen to be opposed to abortion.”

The same view is “promulgated throughout the media, and it’s meant to make us feel shame for being pro-life, which of course we should not be,” he added.

Their aversion to life issues has weakened the Conservatives as Official Opposition, Lemieux noted, also in response to a question on Prime Minister Justin Trudeau and the Liberals pledging $20 million to global abortion fund “She Decides.”

The Liberals have since announced a three-year, $650 million commitment by Canada promote abortion in foreign countries.

Lemieux stated he was “absolutely opposed” to this and as prime minister would reverse it.

“Why are we using taxpayer money, your money and my money, to fund abortions abroad in countries?”

Under the Conservatives, Canada’s Maternal Health Initiative funded only “proper healthcare to newborn infants and to mothers to save lives” and did not “include abortion and abortion services,” Lemieux said.

Trudeau’s Liberal government had already reversed this Conservative policy before committing to the global abortion fund.

But “sadly,” he said, the “Conservative Opposition is not holding the Liberals to account on this. … It’s kind of all quiet in the House, so it’s not a good scenario.”

Lemieux says he advocates free speech and is open to having debates on Parliament on “any issue of interest to Canadians.”

“How is it that in our strong and healthy democracy there are subjects that we can’t talk about?” he said.

One thing Canadians don’t seem interested in is same-sex “marriage,” Lemieux noted when the subject was raised.

He believes in the definition of marriage as between “one man and one woman,” but Lemieux said he has seen no vigorous campaigns to reverse the legalization of same-sex “marriage,” as is the case with abortion.

“I think Canadians have to indicate that it is of interest to Canadians.”

Lemieux opposes Liberal Bill C-16, which adds “gender identity and expression” as prohibited grounds for discrimination, on the grounds it is a threat to free speech.

University of Toronto professor Jordan Peterson has done the same and stated publicly that he would refuse to use the pronouns “zer” or “zim” even if a “gender-fluid” person demands him to do so, Lemieux said.

“He is standing strongly for freedom of speech and I will say as he should. Because many of us don’t see what’s coming, but it is coming.”

The “friction” Peterson has received “is a good indication that what he is saying means something, because if it did not, he would not be getting two letters of reprimand from the University of Toronto” or the pressure “to conform.”

In response to a question on euthanasia, Lemieux said he would “focus tremendous resources on palliative care and on pain management research.”

People will be under “tremendous societal and medical pressure” to “choose the lethal injection” because “it’s so inexpensive, it’s so clean and efficient” compared with the cost of palliative care.

“If we continue our research and funding for palliative care, then hopefully Canadians will not choose assisted suicide and euthanasia, they’ll have an option.”

He supports conscience rights protection for doctors and medical staff so they would not be forced, as is the case in Ontario, to collaborate with euthanasia at the risk of losing their jobs.

Asked about sex education, Lemieux said he believes “parents are the first educators of their children. They know best; the state does not know best.”

Although education is a provincial matter, he would work to ensure “government policies do not insert themselves between parents and their children.”

“My call to Conservatives and to social conservatives is that we need to stand our ground and stop backing up,” he said.

“I think if we are are able to stand our ground, we will accomplish much.”

Moreover, there are “millions and millions” of social conservatives in Canada, he added.

“I am pro-life, I am pro-family, I am pro-freedom of speech, I am social conservative, I am also Canadian. These are Canadian values, our country needs us and our Party needs us, too.”

Social conservatives should ask friends and family to buy memberships to the Party, Lemieux said.

“Conservatives will form government again,” he stressed. “We better make sure the conservative party represents us. … This is the moment in time for the Conservative Party.”

Canadian citizens and permanent residents 14 years of age and older are eligible to vote for the new leader if they have purchased a Conservative Party of Canada membership by March 28.