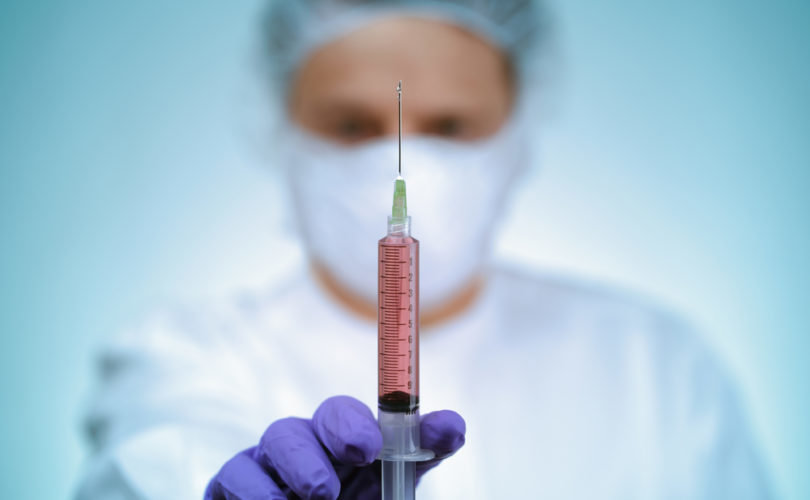 SCOTLAND, January 25, 2019 (LifeSiteNews) – A couple where both are women but one has halfway surgically “transitioned” to “becoming” a man are facilitating their five-year-old son’s self-identification as a girl and have mapped out his future medical/surgical transition to make himself appear female, a path fraught with controversy and likely permanent physical and psychological harm to the child.

And while the two aren’t “married,” the only thing that is normal about their relationship is that they share the same last name.

“Greg” and Jody Rogers are both female, but since “Greg” has undergone medical and surgical treatments try to make herself a man, the two don’t identify themselves as a lesbian couple. They see themselves as “straight,” i.e., a typical heterosexual couple.

Jody has a son from a previous relationship, Jayden, age five, who for the last year has given up boys’ clothes in favor of dresses, and who apparently insists on being referred to with feminine pronouns.

When a concerned neighbor contacted social services after noticing that Jayden had begun dressing in girls’ clothing, the agency concluded the three are a normal, happy family.

“Social workers can see that Jayden is well looked after and have no concerns other than to suggest we consider moving home because of prejudice from some people in the area,” Greg told the Daily Mail in an interview.

“Some parents have even told their daughters not to play with Jayden because she’s [sic] really a boy,” continued Greg. “But we’re refusing to move as the vast majority of our community have no issues with us and are supportive.”

“It has reopened old wounds. Most people do not know my gender identity. They just know me as a male, which is how I prefer it,” said Greg.

In fact, Greg insists that Jayden has no idea that she is a woman and that her own embrace of transgenderism has had no influence over Jayden’s choice to call himself a girl.

“We haven’t encouraged Jayden to do this, despite what people think, and we are hurt at the suggestion,” Greg told the Daily Mail.

He “has no idea that I’m transgender. Having been through this myself, I have conflicting emotions about her [sic] deciding she doesn’t want to be a boy any more. It’s not an easy life. People will always judge you and I don’t think there is a single transgender person on the planet who would push that on a child,” added Greg.

“I had a son one moment and a daughter the next,” she told the Daily Mail. “It probably took me six months to start accepting that it was what Jayden really wanted. It’s been like a grieving process for me, though. I do miss having a son and, as a baby, Jayden looked so much like a boy.”

“I look back at photographs of him now, in his little suits, and it’s like a different person,” continued Jody. “I’ve never been a ‘girly girl’ myself, but Jayden is, and I’ve had to learn to do her hair and nails.”

“Fortunately, her name was unisex, otherwise she would have had to change it, but I still get the pronouns mixed up, calling her ‘he’ rather than ‘she.’ Jayden gets really annoyed with me,” confessed Jody.

In order to facilitate Jayden’s “transition,” his mom and her partner seem to have already acquiesced to administering puberty blockers, and then further hormone treatments and surgical altering of their sons’ genitalia.

“Because of her young age, Jayden will have counselling for a long time to explore who she is,” Greg said of her son. “The most important thing is ensuring she is happy if she wants to fully become a girl. We don’t want a child suffering from mental health problems because she’s been told she can’t be who she wants to be.”

Yet Jayden may suffer more as a result of transgender affirmation than he would without.

Some doctors now speak out forcefully about the dangers involved in encouraging children and teens toward transgenderism.

“The active promotion of transgenderism has resulted in massive uncontrolled and unconsented experimentation upon children and adolescents,” Dr. Michelle Cretella, MD, FCP, previously told LifeSiteNews. “This is child abuse.”

Cretella is president of the American College of Pediatricians and is a prominent expert in children’s health who has battled against the relentless promotion of transgender ideology as it impacts kids.

“Transgenderism is a psychological disorder, not a biological one,” noted Cretella. “Consequently, we expect transgenderism and its associated medical procedures to increase as society increasingly promotes this lifestyle.”

“Many children are being permanently sterilized by these treatments and sentenced to a lifetime of toxic medications to impersonate the opposite sex.” These medications can “cause everything from cardiovascular disease to diabetes to cancer.”

Stevens told LifeSiteNews previously that kids “lack the cognitive ability to give informed consent to procedures like this.” Whether they be hormone treatments or surgical procedures, these interventions have lifelong ramifications.

“Among individuals who identify as transgender, use cross-sex hormones, and undergo sex reassignment surgery, there is well-documented increased incidence of depression, anxiety, suicidal ideation, substance abuse, and risky sexual behaviors,” he said. “Eighty to 85 percent of the time, these kids revert to their biological sex after they go through puberty.”