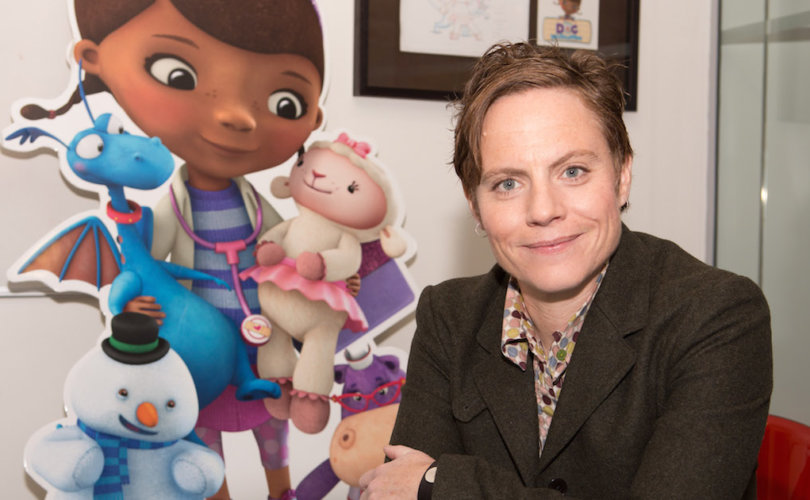 August 14, 2017 (LifeSiteNews) – The creator of the Disney Junior cartoon under fire for depicting a family headed by two lesbians said in 2012 that Disney was “beyond willing” and “excited” to publicize her own homosexuality.

Chris Nee, who is in a same-sex “marriage,” is one of the creators of Doc McStuffins.

“We do see the [main character's heterosexual] parents on the show but is there an opportunity to see some same sex parents like you might see two Mommys or two Daddys?” AfterEllen.com asked Nee in 2012.

“It’s hard to know exactly where the boundaries are because they’re always changing in kids’ TV,” responded Nee.

“I will say I have been incredibly surprised by how supportive Disney has been in the process of looking for press for this show,” she continued. “That’s a change. I’ve never been anything but accepted in the world of writing kids’ TV but I was surprised that Disney has been so beyond willing and excited to sort of publicize this part of my life and this part of who I am. That’s progress!”

Nee has admitted that “we're political” on the show. This is because “we believe [in] fighting for what is right,” according to Nee.

“My son [Theo] has two moms and it's a huge part of my life as a human being and it's been an incredible part of the way that I see the world and the way I see characters,” Nee said in the same interview with AfterEllen.com Her same-sex “marriage” has also played in a part in “the way I want to create characters who are incredibly accepting of each other and whatever is happening in their life,” she said.

Liberals on twitter celebrated the episode for helping kids raised by same-sex couples “know they're not weird” and for being “progressive.”

This AM's episode of Doc Mcstuffins features a 2 mom family. the first time our daughter will see a family like hers in a cartoon.

You should be proud, as should @DisneyChannel. When kids see families like theirs on screen, they know they're not weird. #docmcstuffins https://t.co/vc3BHQwxkG

Thanks to @DisneyChannel for breaking new ground this morning with #DocMcStuffins, ft. 2 moms: https://t.co/1MBvY2chhh #lgbtq #LoveIsLove

I'm in tears. I'm so happy to be represented like a normal person in a normal family. Thank you @Disney and #DocMcStuffins #LoveIsLove ����️‍�� https://t.co/lj7PgkG4Ii

Doc McStuffins has always been the most progressive kids show. We bloody love it in this house. Child is gripped. https://t.co/26zXaL9HXr