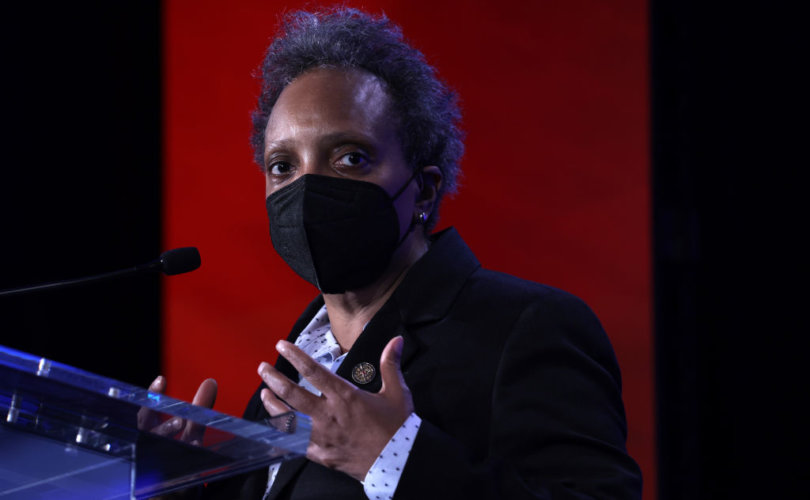 WASHINGTON, DC - JANUARY 20: Chicago Mayor Lori Lightfoot speaks during the 90th Winter Meeting of USCM on January 20, 2022 in Washington, DC. The U.S. Conference of Mayors held its annual winter meeting to hear from Congressional leaders, Biden Administration officials, and other experts to discuss the best ways to achieve the goals of America’s cities in 2022. (Photo by Alex Wong/Getty Images)Alex Wong/Getty Images

In a hyperbolic tweet, the Windy City’s Democrat mayor suggested that after Roe v. Wade is reversed, the Supreme Court (SCOTUS) will soon be “coming for” homosexuals and transgenders.

“To my friends in the LGBTQ+ community,” wrote Lightfoot, “the Supreme Court is coming for us next.”

“This moment has to be a call to arms,” added Lightfoot.

To my friends in the LGBTQ+ community—the Supreme Court is coming for us next. This moment has to be a call to arms.

Lightfoot’s dangerous social media posting has come at a time when the nation’s capital is a tinder box, with hundreds of pro-abortion protesters daily swarming the Washington, D.C., area homes of the SCOTUS justices who signaled their intention to overturn Roe v. Wade.

With the situation as tense as it is in the nation’s capital since the leaking of the draft, many pundits quickly identified Lightfoot’s tweet as an incitement to insurrection.

First out of the gate was radio host and Post Millennial journalist Ari Hoffman, who observed, “I think someone just called for an insurrection.”

I think someone just called for an insurrection https://t.co/vL1M55zw9f

Lori Lightfoot advocates for an insurrection after SCOTUS leak

President Donald Trump was banned from Twitter for his tweets encouraging his followers to challenge the results of what may have been a fraudulent presidential election leading up to the events at the U.S. Capitol of January 6, 2021; Lightfoot has now gone further than Trump and employed patently violent rhetoric, yet her comments remain on Twitter.

After nearly a year and half of accusing President Trump of inciting an “insurrection,” Lightfoot’s “call to arms” are clearly hypocritical, as is the non-action of Twitter against Lightfoot.

On the afternoon of January 6, 2021, Lightfoot took to Twitter to condemn President Trump for language far less fraught than her own.

“I am in disbelief with what is unfolding in D.C. right now,” tweeted Lightfoot at the time. “President Trump and his enablers incited this violence. Shame on every elected official in Congress and elsewhere who fomented this anti-democratic insurrection by extremists. This is not democracy. This is a disgrace.”

Lightfoot’s hypocrisy was evidently clear to everyone but herself.

“Excuse me,” wrote conservative author and commentator Liz Wheeler. “I thought it was illegal to incite an insurrection?”

“Let me ask Trump…” she continued. “OH WAIT he was kicked off Twitter for farrrrrr less than this Lightfoot tweet calling people to arms against SCOTUS.”

Excuse me I thought it was illegal to incite an insurrection? Let me ask Trump… OH WAIT he was kicked off Twitter for farrrrrr less than this Lightfoot tweet calling people to arms against SCOTUS. https://t.co/SGmiLuBuBh

“But they’re now allowing far more straightforward calls to violence from leading blue checks and Democrats,” continued Bovard, “Because of course they are.”

New from me —> Twitter permanently banned Trump for two tweets they claimed were “interpreted” as glorifying violence. But they’re now allowing far more straightforward calls to violence from leading blue checks and Democrats. Because of course they are. https://t.co/0hwN5R6G7C

In a column for National Review, former Assistant United States Attorney for the Southern District of New York, Andrew C. McCarthy, explained the hypocrisy of Lightfoot’s infelicitous call to arms in detail:

According to the theory of the House Democrats’ impeachment article, then–president Trump was guilty of “incitement to insurrection” because he was promoting a lie (namely, that the election had been stolen by fraud) and had rhetorically encouraged people who had been whipped up by the lie to “fight” (“if you don’t fight like hell you’re not going to have a country anymore”).

Lightfoot is promoting a lie: The leaked draft opinion by Justice Alito in the Supreme Court’s Dobbs case is not a ruling; if it became a ruling it would overturn Roe, not end abortion; at this point, there is no challenge to LGBTQ+ rights; the abortion case, even if something like the Alito opinion becomes the law, would not affect LGBTQ+ rights.

With radical leftists whipped up over such lies and committing acts of intimidation and violence that threaten a department of government, Lightfoot calls for a “fight” just as Trump did. Except: After falsely claiming the Supreme Court was “coming for” LGBTQ+ people, Lightfoot stressed that “this moment has to be a call to arms.” In Chicago of all places, where calls to arms have a way of being followed by arms being fired.

So this is incitement to insurrection, right?