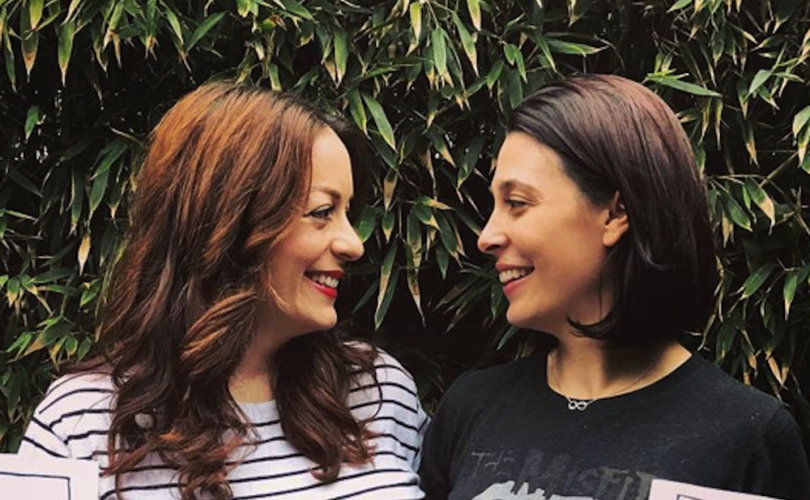 Toby Fleischman and lesbian 'wife' Lindsay Lanciault are both pregnant.

March 29, 2017 (LifeSiteNews) — American pop culture and the media continue their ubiquitous mainstreaming of all things LGBTQ, as Redbook magazine champions a lesbian couple in which both partners are pregnant.

Celebrity Hollywood makeup artist Toby Fleischman and lesbian “wife” Lindsay Lanciault have used Instagram to show off their dual pregnancies. Both babies were artificially conceived using the same sperm donor, according to a PopSugar story on the two women.

We're excited to share some news…Lindsay and I are both pregnant! Yes, you read that correctly. We are both having a baby….at the same time. Well, three weeks apart to be exact. Everyone always says they want to get pregnant with their best friend and I just happened to be lucky enough to be married to mine. Our “twin” boys will be joining us this summer and we couldn't be more elated!

As is typical, most in social media cheered the lesbians on. Many of the comments responding to Fleischman’s Instagram post said their situation is “cute” and offered congratulations to the homosexual couple.

One apparent lesbian, “sauceangeles,” wrote, “Congratulations. My wife and I also had overlapping pregnancies (both boys) and wouldn't trade it for anything. Our ‘twins’ are our world!”

Fleischman and Lanciault had to adjust to finding out that they are having boys, but they pledged to raise the boys to become “feminists.” PopSugar reports:

“The couple were very confident with the idea of raising strong women, because they themselves are strong women. But men? This is a challenge they admit they didn't initially think through. ‘We have this huge responsibility to raise respectful, compassionate, feminist men,’ Fleischman says.”

Fatherlessness ‘is not cute’

Two critics of the LGBTQ activist agenda (which includes normalizing homosexual parenting) with deep experience in homosexuality offered a starkly different take on the dual-lesbian pregnancies.

“Intentional fatherlessness is not cute,” Robert Oscar Lopez, who was raised by his mother and her lesbian partner, said in an interview with LifeSiteNews. “To raise men you need a role model — a boy needs a father.”

Lopez is the director of Texas MassResistance and a professor at Southwestern Baptist Theological Seminary. He once identified as “gay” but since 2001 has been married to his wife and is the father of their two children.

“The children are the victims” in lesbian parenting, Wall told LifeSiteNews. “And the roller coaster ride of homosexual life is not a ride to create children on.”

Wall, who describes herself as “delivered from homosexuality by the power of the Living Jesus Christ,” said lesbian relationships typically are far from stable and lasting.

“The ones [lesbians] who had kids, I saw the kid get shuffled from one person to another person,” she said.

Wall, who said she was involved in three or four serious lesbian relationships herself, said it seemed to her that homosexual parents treated their child ‘like it’s a toy.’”

“Children need a mom and dad – a man and woman – to teach them the balance of nature,” she said, adding that creating a child “by design” without a dad is “just plain wrong.”

Lopez said it is a mistake to compare single women raising children due to difficult circumstances to “intentionally denying the child a father,” as Fleischman and her female partner Lanciault are doing.

“Complications arose, resulting in the two women having to find a new sperm donor and adding stress to their relationship, something that tends to happen when any couple is having difficulty conceiving.”