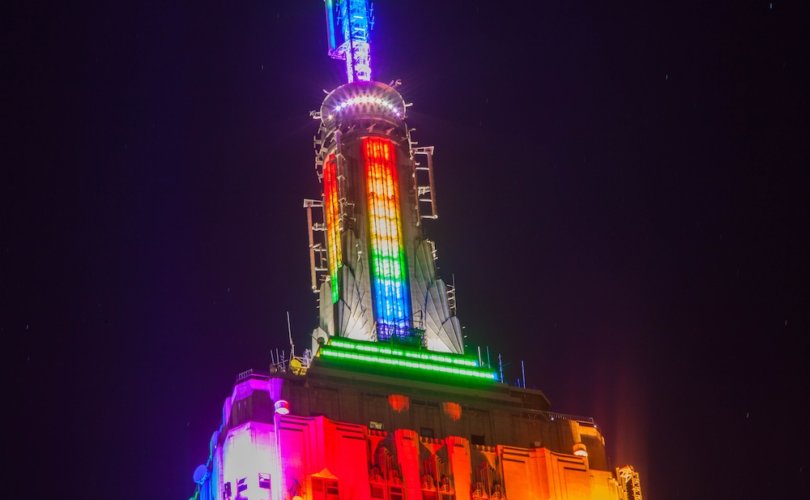 NEW YORK CITY, February 11, 2019 (LifeSiteNews) – A lesbian couple is among the winners of the Empire State Building’s annual contest to hold a “wedding” ceremony atop the iconic New York landmark on February 14.

For 25 years, the building’s owners, Empire State Realty Trust, have held a Valentine's Day Wedding Contest, for the opportunity to hold fifteen-minute ceremonies on the 86th floor Observatory. Fabiana Faria and Helena Barquet, the female owners of Lower East Side home design store Coming Soon, were one of the two pairs to win this year out of more than 1,000 entries, according to the Trust’s press release. New Jersey couple Chitra Pathak and Nachiket Patel also won.

“With over 1,000 entries from both near and far, it's evident that the storied history and romance surrounding the Empire State Building continue to touch lives around the globe,” the Observatory’s senior vice president Jean-Yves Ghazi said. “I'm excited to officiate at the weddings for Helena and Fabiana as well as Chitra and Nachiket, and continue this tradition for its 25th year.”

Faria and Barquet “exemplify a true NYC love story,” the press release claims. “With a shared fascination in the Empire State Building and the meaning behind its nightly tower lightings, Fabiana and Helena are excited to celebrate their love story and marry on the landmark's 86th floor Observatory.”

The news is being celebrated across the pro-LGBT blogosphere, with coverage from LGBTQ Nation, New Now Next, and PinkNews.

“I feel like we wanted to be together all day, too, which was a big reason to open a store and do it together,” Faria told Racked in a 2016 interview. “We treat this a little bit like our own apartment.” Barquet added that “We don't live together, so this is our home. We live in the store!”

The iconic building has previously been lit in rainbow colors to recognize “Pride Week,” a socially-liberal counterpart to Cuomo directing the World Trade Center spire to be lit in pink last month to commemmorate a state-level “right” to virtually-unlimited abortions.