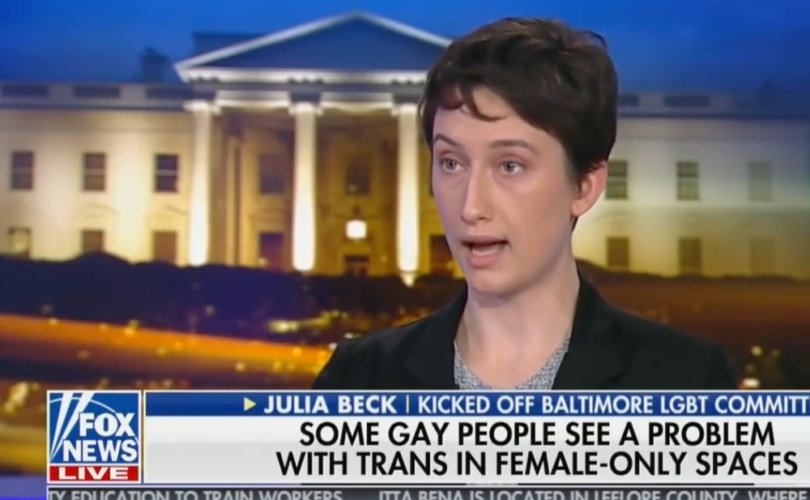 Julia Beck told Carlson on the Feb. 11 edition of “Tucker Carlson Tonight” that “women and girls all share a biological reality” that men can never share, no matter what surgery they might undergo.

“We are all female. But if any man, if any male person can call himself a woman, or be legally identified as female, then predatory men will do so in order to gain access to women’s single-sex spaces, and it puts every woman and girl at risk,” she said.

“In many states, men can legally identify themselves as female and gain access to women’s single-sex spaces, and sports is just one institution where men are taking titles, scholarships, and this is a problem,” Beck added.

Beck said that the LGBT acronym (standing for Lesbian, Gay, Bisexual, and Transgender) really should not include transgenders.

“The LGB is very different from the T, and I don’t think it's fair to lump us into the same acronym,” she said.

Beck said that allowing men who claim to be women into female-only spaces “puts every woman and girl at risk of male violence, and this is already happening in many states.”

Carlson asked Beck why fellow feminists have not raised the alarm about this. Beck replied that some have spoken out about the issue for decades.

“Women have been speaking out about this for decades, but we have been effectively silenced,” she said. “Many women, like myself, have been pushed out of spaces that we built, spaces that are intended to include us, simply because we acknowledge biological reality.”

Beck said that she was kicked off of the Baltimore LGBTQ commission last year by a biological male who “identifies as a lesbian” because she opposed transgender ideology. When Carlson asked what reason was given for her being booted from the commission, Beck said, “My accuser said that they didn't have to make a case. One of the members of my committee argued that sex was a thing of the past. He said, frankly, science had progressed so far that sex was unimportant. I argue the opposite.”

When Carlson asked why Beck was chastised for saying something most people believe is obvious, she responded, “I believe in the truth,” and added, “I believe that people should have these conversations and say things that matter without fear of punishment.”

In a conference sponsored by the Heritage Foundation in January, Beck related how she was “kicked off of the Baltimore mayor's LGBTQ commission — as the only lesbian — simply for stating biological facts.”

“I was found guilty of 'violence.' My crime? Using male pronouns to talk about a convicted male rapist who identifies as transgender and prefers female pronouns,” she said.