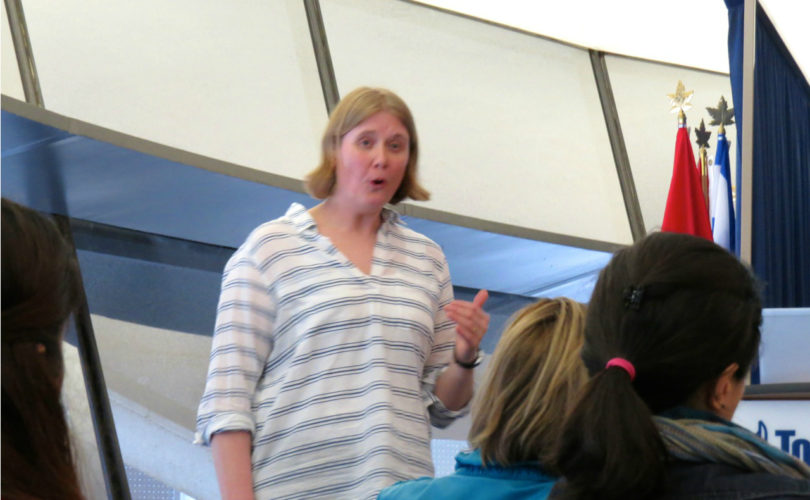 Lesbian teacher Alicia Gunn says, 'If you don’t want to send your kid to school on the Day of Pink, that’s OK. But they’re going to get it all the days before.'Pete Baklinski / LifeSiteNews

TORONTO, April 24, 2015 (LifeSiteNews.com) — A lesbian teacher ‘married’ to another woman revealed at a pro-gay teachers’ conference earlier this month how she teaches grade 4-5 students to accept homosexuality through what she called “social justice” math.

Alicia Gunn, an elementary public school teacher in Mississauga, Ontario, told attendees at the April 10 conference in Toronto’s City Hall that injecting LGBTQ issues into the classroom, especially in math, helps students as young as nine “disrupt the single story that many of our kids have about LGBTQ families.”

“Social justice math happens when students are solving problems using real, engaging, and meaningful numbers. Social justice issues happening in their school, community, or even globally become the context for the math that the students are doing,” she said.

The conference, hosted by the homosexual activist organization Jer’s Vision — now called the Canadian Centre for Gender and Sexual Diversity — focused on the implementation of Bill 13 in Ontario classrooms. Bill 13, called by critics the homosexual bill of rights, passed in June 2012, giving students the right to form pro-gay clubs in their school, including Catholic ones, using the name Gay-Straight Alliance.

When asked by one of the workshop attendees if she first asks parents’ permission before bringing homosexual issues up in class, Gunn responded that she does not, but she makes sure to teach her students about numerous social justice issues so that no parent can accuse her of focusing on homosexuality, which she said she likes to “hide” in her lessons.

“I find if you teach all the ‘isms,’ it kind of backs you,” she said. “If I teach all the isms, and sometimes I can hide it a little bit in the math, and what I mean is I can say, ‘I’m just teaching your kid about division. I’m so sorry that you, you know, feel that way,” she said, causing the room of educators to break into laughter.

LifeSiteNews attended the event and was asked at one point to stop filming, but captured the discussion on a back-up audio recorder.

Gunn told attendees in her workshop, titled “Equity & Inclusion in Curriculum,” how she used the situation of students one day name-calling a young female student “lesbian” as a springboard to introduce the class into what she called “conversations” about “gay stuff.”

Gunn, who has received awards for her teaching methods and who is featured in a teacher resource put out by the government agency ServiceOntario, related how she first spoke with the female student, telling her that it was “OK to be gay.”

In an attempt to “give this girl her dignity back” Gunn made a presentation to the class of the lives of famous people who have identified as ‘gay,’ including basketball player Jason Collins, Welsh rugby player Gareth Thomas, and TV host Ellen DeGeneres.

“So, we came back to the carpet to talk about what do these people have in common. And [the students] were saying, ‘They’re awesome, they’re so cool, they’re famous. We’d love to meet them,’” Gunn told attendees.

Video from 2008 of Gunn teaching children about homosexuality:

Gunn then said when she broke the news to the students that all these people were gay, instead of them reacting positively as she had hoped, the students began to shout out “‘gross’ and ‘disgusting’ and ‘these people are sick.’”

At this point Gunn said she realized she would have to come up with a more creative way to get her students to think differently. That’s when she and a few like-minded teachers held a meeting to determine how they could weave the promotion of homosexuality into the curriculum, beginning with math.

Gunn showcased at the workshop her math lesson on triangles. She designed it around the pink triangle which the Nazis used in WWII concentration camps to identify sexual offenders including rapists, paedophiles, zoophiles, as well as homosexuals.

“The pink triangle was a badge of shame that the Nazis made gay men wear during the holocaust. So what we did is take a look at all the different badges of shame that people would have been wearing,” she told attendees.

“Now mathematically where we were is looking at different types of triangles. So, looking at angle-inside measurements to be able to tell is it isosceles, is it equilateral, is it scalene. So, that was the math aspect. But more importantly was the [pro-homosexual] thinking that went into it.”

Related: Teacher reveals how he convinced his Catholic school board to go pro-LGBTQ

Following the pink triangle math lesson, Gunn related how she had her students create “badges of pride” to turn the narrative on its head, “because that’s what the pink triangle has become, it’s become a symbol of pride.”

She related how one student made a badge with a pink heart, writing, “The pink heart shows that I am proud of who I love. I chose the color pink to make the badge, because of the badges of shame the Nazis made pink to make gays feel bad about being gay. So, I use it to show that you can love whoever you want.”

Gunn said she was pleased with the students’ headway.

“Already I’m feeling that the story is being disrupted. The original story of gay people being gross and disgusting, slowly we’re getting there.”

“So, I keep going,” she told attendees.

Her next classroom project consisted of having the students research famous LGBTQ Canadians and the contributions they’ve made.

One such person the class focused on was ‘Jenna’ Talackova, a biological male who in 2012 successfully campaigned to participate in the Miss Universe Canada contest. Talackova, who underwent “gender reassignment” surgery at the age of 19, was originally barred from the contest because of a rule requiring the contestant to be a “naturally born woman.”

A poster-board display created by the students titled “Pretty and Proud” showing photos and magazine clippings of Talackova falsely claims he “won the pagent [sic]” when in fact he was one of the final 12 contestants.

Gunn said the students learned from the lesson that “you really need to stand up when things are wrong. You need to have a voice.”

‘Does it matter if someone’s LGBTQ?’

Gunn related how on another occasion, she wrote on the board, “Does it matter if someone’s LGBTQ?” asking her students to write their answer on a sticky note, which, when collected, were sorted into ‘Yes’ and ‘No.’

She told workshop attendees that the children’s answers showed the fruit of her work. “You’ve got to remember, these are grade 4-5 students and some of them really get it,” she said.

One student wrote, “No, it should not matter who you love, what gender you are, your race or sex, or what you look like.”

Another wrote: “I think it doesn’t matter if someone is LGBTQ, because they are just like us.”

Gunn related how she then used math to examine the rates of discrimination against people who identify as gay or lesbian from a chart put out by the homosexual organization Egale.

“What I had students do in groups is take a look at one of the graphs, and tell the class the story that the graph tells. What’s happening in our schools right now that makes it still matter if someone is LGBTQ,” she told attendees.

One group of students went on to examine a graph of those “feeling upset by homophobic comments” compared to those who do not.

“My one group was really upset by people not being upset,” Gunn related. “They were saying, ‘The fact that only 5.6% of non-LGBT kids care when they hear these things, that upsets me.’ One of my boys put up his hand and said, ‘I’m one of those people, and I’m extremely upset.’”

Gunn related how after one pro-LGBT lesson she asked her students what they were going to do to make a difference. On top of deciding to be “kind” to LGBTQ people, the students decided to run a fundraiser selling Pride Dolls to raise money for Russia's LGBT community by supporting the Gay and Lesbian International Sport Association (GLISA). Gunn praised the dolls to attendees as an asset to the classroom, saying how students loved to play with them. “They’re nesting dolls. The kids love taking them apart and playing with them,” she said.

One conference attendee asked Gunn what to do about parents who do not support the LGBTQ movement, mentioning how parents once told her not to involve their child in the pro-homosexual ‘Day of Pink.’

Gunn mocked the parents for failing to realize just how extensive are pro-LGBTQ issues in the classroom and curriculum.

Gunn’s workshop partner Hiren Mistry, Instructional Coordinator for Equity & Inclusive Education in the Peel District School Board, put it this way: “Equity is not an add-on, it is the foundation of everything.”