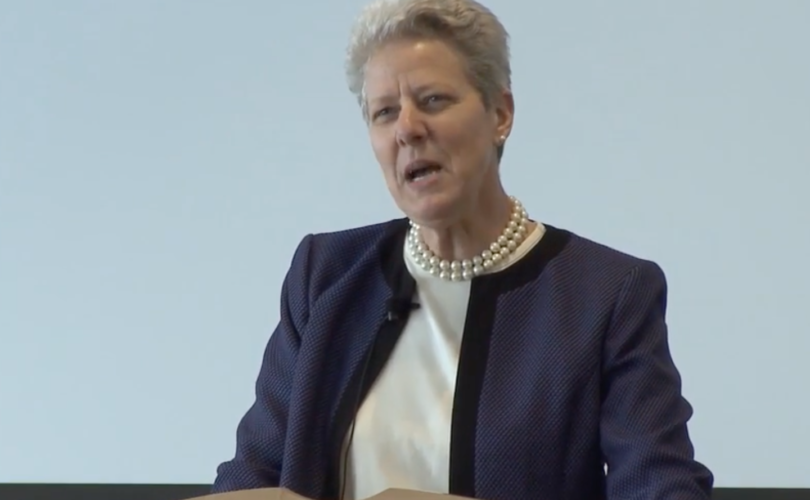 EAST GRAND RAPIDS, Michigan, November 27, 2019 (LifeSiteNews) — LifeSite has learned that the lesbian judge currently orchestrating a coup against the Catholic priest who runs the parish she attends has previously attempted to not only smear him as a bigot but has tried to get him removed as chaplain of the Catholic Lawyers Association of Western Michigan.

Judge Sara Smolenski is the chief judge of the Kent County District Court in Western Michigan. Earlier this week, Smolenski appeared on local NBC affiliate WOOD-TV 8 to complain about how Fr. Scott Nolan of St. Stephen’s Catholic Church refused to give her Holy Communion recently.

Although such pastoral matters are typically dealt with in private — and not aired on nightly news broadcasts — Smolenski told liberal reporter Barton Deiters that Fr. Nolan’s actions were “offensive” and that her faith is “a huge part of who I am.”

Smolenski is currently “married” to another woman and has, in the past, “married” hundreds of homosexual couples herself. She said Nolan refused her Holy Communion because she was in violation of the Church’s teachings. Bishop David Walkowiak, head of the Grand Rapids Diocese, has expressed support for Nolan’s decision.

On October 11, 2019, Smolenski co-authored a letter addressed to the judges of West Michigan that accused Nolan of being discriminatory against homosexuals. The letter also encouraged them to not attend the Diocese of Grand Rapids’ annual Red Mass, which was coordinated by the Catholic Lawyers Association. Red Masses are liturgies the Catholic Church offers for lay Catholics who work in the legal field.

In her letter, Smolenski drew attention to an incident where Fr. Nolan refused to give the Eucharist to what she called “two legally married women” who presented themselves for Holy Communion during Mass. Smolenski said Nolan’s decision was “hurtful and humiliating” and that it caused “much hardship at the parish and in the greater community.” Without proof, she alleged that he refused the women Communion “because they are gay.”

A charitable reading of the situation might have been that Fr. Nolan refused them Communion because he thought or even knew they were active homosexuals. The Church teaches that homosexual acts are intrinsically disordered and are one of the four sins that cry to heaven for vengeance. Persons obstinately persisting in a public state of sin are not to be admitted to Communion, according to Canon 915 of the Code of Canon Law.

Smolenski further wrote that while Fr. Nolan has the right to “deny communion to those who are not in conformity with the teaching of the Church,” his behavior was unjust, against the teachings of Pope Francis, and not pastoral.

Smolenski and her co-authors, judge Patricia Gardner and judge T.J. Ackert, claimed that Fr. Nolan’s decision to deny Communion to homosexuals shows that he does not share in the values of the Catholic Lawyers Association. They noted that several judges in the area met with Fr. Nolan and urged him, unsuccessfully, to resign and for the Chaplaincy to be eliminated altogether.

“We cannot in good conscience attend a service sponsored by an organization who supports a Chaplain who demeans citizens we are charged with protecting from discrimination and unfair treatment,” the judges stated.

Conservative commentator Rod Dreher, writing for The American Conservative, has said it is important for Catholics in Grand Rapids to express solidarity with Fr. Nolan. “The way the laity support him, or fail to support him, is going to be a teaching moment for all other Catholic priests thinking about whether or not to stand up to the demands of LGBT bullies and their allies.”