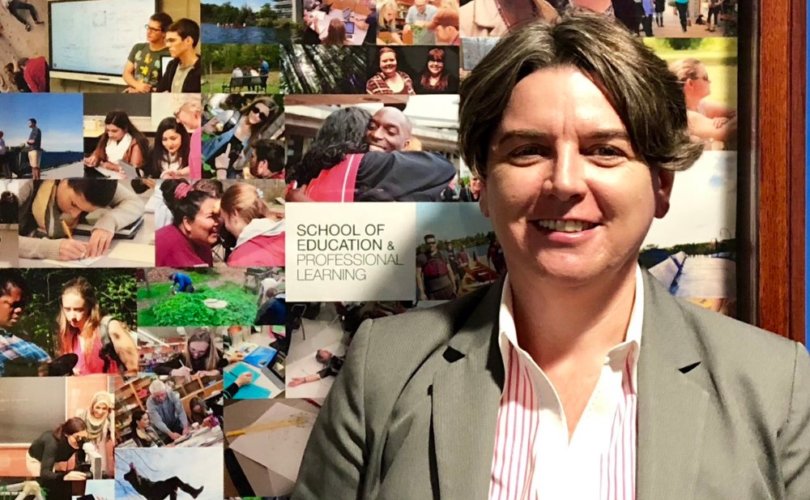 Tonya Callaghan, author of Homophobia in the Hallways: Heterosexism and Transphobia in Canadian Catholic SchoolsTwitter

CALGARY, Alberta, March 14, 2019 (LifeSiteNews) — A lesbian and former Catholic school teacher has written a book claiming Alberta and Ontario’s publicly funded Catholic schools are “potential hotbeds for homophobia,” for which she appears to argue Catholic teaching is to blame.

Tonya Callaghan quit teaching in a Catholic school, where she allegedly suffered “homophobia” daily, after a homosexual student committed suicide. In an article for  The Conversation, Callaghan attributed that to homophobic bullying.

She then devoted herself to the research of “homophobia and transphobia” in Catholic schools, and “also to begin to question and understand how these phobias are institutionalized.”

Callaghan — now a University of Calgary assistant professor of education — discovered the problem is Catholic teaching on homosexuality.

Such “recurring discrimination against sexual and gender minority groups could be due to the central contradiction within Catholic doctrine itself: the church’s teaching best summarized as ‘It’s OK to be gay, just don’t act on it,’ — a position some Catholics reject,” she explained.

“Where schools promote such contradictory messages associating respect and depravity with LGBTQ people, they have made Alberta and Ontario Catholic schools potential hotbeds for homophobia,” Callaghan wrote.

New Ways Ministry, a dissident group that seeks to change Catholic teaching on homosexuality, lauded Callaghan as a scholar whose work reveals “how involved the Church is in discrimination.” Her article from The Conversation was also reprinted in the National Post.

Alberta and Ontario governments arguably have already long been pushing the LGBT agenda into Catholic schools.

Both provinces compel Catholic schools by law to allow Gay/Straight Alliances (GSA) if a student requests one: Alberta’s Tories passed Bill 10 in 2015, and Ontario’s Liberals Bill 13 in 2012.

Bill 13 was implemented as part of Ontario’s 2009 Equity and Inclusive Education Strategy, which mandated all Catholic and public school boards develop an equity policy, and recognize sexual orientation as grounds for non-discrimination, regardless of the board’s moral traditions on the subject.

GSAs are touted as clubs to combat bullying, but pro-family groups say they are venues for LGBT activists to promote homosexuality and transgenderism to impressionable students.

Alberta’s current NDP government went much further with Bill 24 in 2017, which bans schools from telling parents their child has joined a GSA. The Justice Center for Constitutional Freedom has challenged Bill 24 in court as unconstitutional.

Barb Hamilton alleged during her 15 years with CCSD she was discriminated against because she was a lesbian, and had no choice but to resign, reported CTV at the time.

The CCSD has a contract clause stating teachers must “follow and model to others, both in and out of school, a lifestyle in harmony with the practices and beliefs of the Catholic Church,” it reported.

Eggen is “deeply concerned to learn that any school board was making their employees sign a document that says it is not OK to be gay. He believes that it is simply not acceptable in today’s Alberta,” his office told Grandin Media.

He wants to make sure such clauses are legal, Eggen told CTV.

“You can have attestations of faith, I mean, that’s one thing,” he said, “but to deny someone employment or termination based on sexuality or other factors is definitely not acceptable.”

A ministry spokesperson told LifeSiteNews she had no update on the review “at this point.”

Eggen could have been taking a page from Callaghan’s book, though unlike her, he did not invoke the Charter.

“Using Catholic doctrine to fire LGBTQ teachers and to discriminate against queer students in Catholic schools violates Section 15 of the Canadian Charter of Rights and Freedoms, the equality rights provision,” Callaghan contended.

But legal and educational experts counter Catholic schools are doing that.

Callaghan “seems to have overlooked the fact that schools under the BNA Act and Section 29 of the Charter of Rights are allowed to continue their own particular teaching in the schools,” Gwen Landolt of REAL Women of Canada told LifeSiteNews.

The Church teaches that “chastity is the remedy for same-sex attracted individuals since acting on those feelings is contrary to natural law,” and Catholics “are called to accept everyone with respect, compassion, and sensitivity,” he told LifeSiteNews.

“But only the unquestioned promotion and celebration of homosexuality is acceptable for those who identify as LGTBQ,” Iacobelli said.

“It’s time to stop the fake and political homophobic argument against Catholics and anyone else who doesn’t completely agree with normalizing homosexuality,” he added.

“Real diversity would include different views or it’s not diversity at all.”

Callaghan has “embarrassed” herself and her university, says Catholic lawyer Geoff Cauchi.

“I’m amazed it did not dawn” on Callaghan “that the resistance of teachers and administrators at Catholic schools to the imposition of the LGBTQ political agenda at their schools and their efforts to maintain a genuine Catholic identity at their schools might have a legitimate constitutional and legal foundation,” said Cauchi.

If Callaghan and others “don’t like this fact, they have every right to lobby members of the public to create a groundswell of support to amend the Constitution to repeal the denominational rights of the Catholic community,” he added.

“But until any such amendment is passed, it is unethical and undemocratic for them to lobby MPPs and educrats to deliberately deny Catholics their denominational rights.”