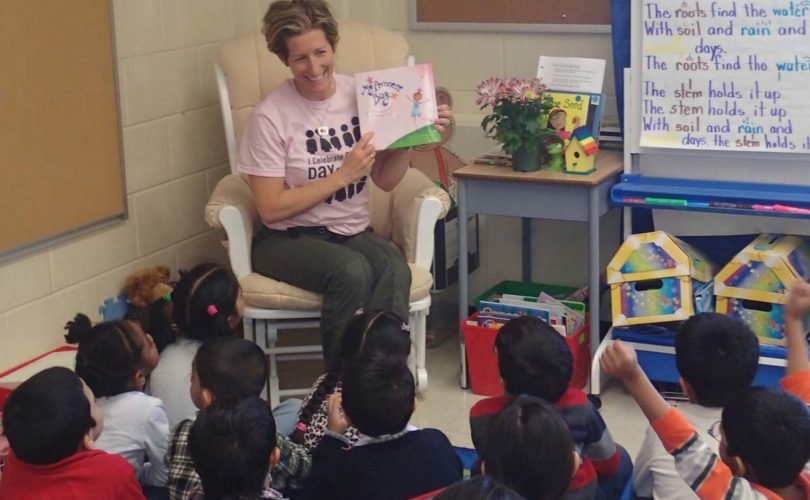 Lesbian teacher Pam Strong teaches a classroom of elementary students at Ellengale Public School on Day of Pink in 2012.http://etfovoice.ca

TORONTO, April 20, 2015 (LifeSiteNews.com) — A primary grade lesbian teacher from an Ontario public school revealed in a workshop at a homosexual activist conference for teachers earlier this month how she uses her classroom to convince children as young as four to accept homosexual relationships.

“And I started in Kindergarten. What a great place to start. It was where I was teaching. So, I was the most comfortable there,” Pam Strong said at the conference, attended by LifeSiteNews.

The conference, hosted by the homosexual activist organization Jer’s Vision, now called the Canadian Centre for Gender and Sexual Diversity, focused on the implementation of Bill 13 in Ontario classrooms. Bill 13, called by critics the ‘homosexual bill of rights,’ passed in June 2012 and gave students the right to form pro-gay clubs in their school, including Catholic ones, using the name Gay-Straight Alliance (GSA).

Strong, who is in an open relationship with another woman and who has been a teacher for about five years, focused her workshop on what she called the “power of conversation” for promoting LGBTQ issues in an elementary classroom. She began her talk by relating how she reacted the first time one of her students called another student ‘gay’ as a putdown.

“With [the principal’s] encouragement, we decided that I would go from class to class and talk about what ‘gay’ means, what does ‘LGBTQ’ mean, what do ‘I’ mean,” she told about 40 attendees, all educators, at her workshop.

Strong related how she began with the junior kindergarten class.

“And I read a [pro-gay child’s] book [King and King], and I started to realize that conversations can be very difficult, and they can have the most power when they are the most difficult.”

“But difficult conversations are a part of what we do as teachers, right? And when these conversations are properly supported by teachers within the safety of the classroom, they provide a rich environment for our students as they unpack these complex social issues and they reflect on their own preconceptions, rights, of gender, sexuality, love, all these different things,” she said.

Strong related that as she was reading “King and King” in the junior kindergarten class as a springboard to discuss her sexuality with the kids, she got to the part where the two princes become ‘married’ when one of the boys suddenly shouted out: “They can’t do that! They can’t get married. They’re two boys.”

To which the boy replied, according to Strong: “Oh, yeah, I know Mrs. Strong, but that’s just a story. That’s not real life.”

Strong said the young children “just all kind of went silent.” She then told them: “That may seem different to you, how many of you have heard of that before?”

“Not one hand went up,” she related. “And so I said: ‘That may seem different to you, but we’re not that different. Would you like to know about what I do with my family?”

“Yeah, tell us,” she recounted the children enthusiastically saying.

“I said, you know, we take our kids to the park. I swing them on swings,” she related, telling conference attendees that she could share things she did with her own children that “mostly likely all of their families did with them.”

Then she told the children: “We laugh together. We go grocery shopping together. I read to them. I tickle them, sometimes until they scream and laugh and when they cry, I hug them until they stop.”

Strong said that at that point, the boy who had used the word ‘gay’ looked and her and said: “Well, you’re a family.”

‘It’s normal in my classroom’

Strong related an incident that happened last fall involving a new boy who had recently entered her grade 5 classroom. The new boy had not yet been made aware of Strong’s sexual preference for other women.

“All my class is very used to who I am. My family picture is very proudly in my room now. On Mondays they quite often will say, ‘What did you do with your wife?’ It’s normal in my classroom.”

Strong said that a conversation between herself and the students came up one day where it was mentioned that she was a lesbian. The new boy put his hands over his mouth and said, according to Strong: “Oh, my God, I think I’m going to puke.”

“As I took the abuse — personally, as an individual – of those words, I also saw half of my class look at me with incredible concern. One student who was right in front of me already had tears in her eyes. And I noticed several other students who were looking at him. They were just very, very upset with this kid,” she related.

Strong said the boy instantly became aware that “something he had said had just created this unbelievable tension in the room.” She related how she addressed the boy, telling him: “I think that what you might not be aware of is that I am gay, and I am married to a woman, and my family has two moms.’”

“His eyes just started darting around, and he was incredibly uncomfortable,” she related.

“I looked at the other kids and I said: ‘Ok guys, what I want to ask you is: Am I upset with him?’ And the one little girl in my class put up her hand — that doesn’t usually get into these conversations very much in my classroom — and she said, ‘Mrs Strong, I know you’re not upset with him, because he hasn’t had the benefit of our conversations.”

Strong said that she then directed her class to the board and asked them to write everything she had told them related to LGBTQ.

“And my class all of a sudden popped up. ‘LGBTQ’ was on the board, ‘lesbian,’ and all the different words coming out there. And I sat back and said, ‘Let’s review.’ So, the last year and a half of ‘inclusive’ education came alive in my classroom.”

Strong told her workshop attendees that her “new little friend” is now a devoted champion of diversity. She boasted how he was the one in her class to count down the days to the pro-homosexual Day of Pink that took place earlier this month. When Strong took a photo of all the children wearing pink shirts in her classroom, she said the boy requested to be in the front.

Strong called it “key” to develop a “positive classroom culture” — and she mentioned it often takes months — before getting into what she called “difficult conversations” with students about convincing students of the normality of her sexual preference for women.

She mentioned how she spends time “building a common vocabulary” in her classroom of words like “stereotype, prejudice, discrimination” so her students will be able to more readily conform to her pro-LGBTQ message.

“Sometimes with these big ideas there are also very big words that are very hard to understand. I find that whether it’s kindergarten, right up to grade six, visuals help a lot,” she said.

The lesbian teacher has amassed a collection of “conversation starters” that she says helps get her started when presenting to her students the LGBTQ message. She said pro-gay children’s books are one of her favorites.

“I use current events, news articles, advertisement are great for gender, especially with Kindergarten kids, pink and girl toys and all the rest of it. Commercials are great, I use one right now, the Honey Maid commercial.” The 2014 “Dad & Papa” commercial depicts two male same-sex partners engaging with their children in normal family activities such as making s’mores, eating dinner around the table, and walking in the park.

Strong says she watches the commercial with her students up to three times, asking them to make a list of all the similarities between the gay-partnership and their own families.

Strong said the kids notice dozens of similarities, but usually only one difference, namely that the commercial has “two dads.” Other than this, she said the students “could not find one thing in that commercial that was different than their own families.” In this way she convinces the kids that a gay-partnership is identical to a family made up of a male and female. Strong called it a “fantastic lesson for kids of all ages.”

“There was nothing left for me to teach at the end of it. It was a huge learning for some kids,” she said.

‘Recruiting children? You bet we are’

“I am here to tell you: All that time I said I wasn't indoctrinating anyone with my beliefs about gay and lesbian and bi and trans and queer people? That was a lie,” wrote Canadian gay activist Sason Bear Bergman, a woman who identifies as a transgender man, in a March 2015 piece titled “I Have Come to Indoctrinate Your Children Into My LGBTQ Agenda (And I'm Not a Bit Sorry).” Bergman holds nothing back, stating she wants to make children “like us” even if that “goes against the way you have interpreted the teachings of your religion.”

Homosexual activist Michael Swift wrote in 1987 in the Gay Community News that school children would become explicit targets for homosexual indoctrination. “We shall seduce them in your schools…They will be recast in our image. They will come to crave and adore us,” he wrote at the time.