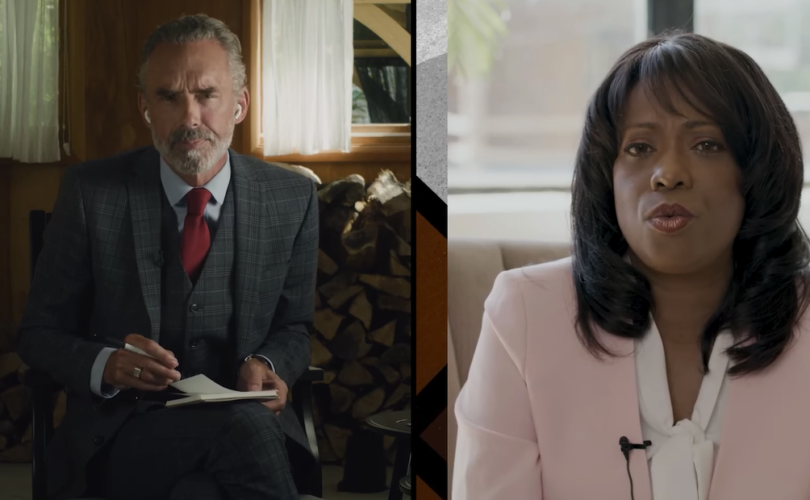 (LifeSiteNews) – Conservative Party of Canada (CPC) leadership candidate Leslyn Lewis told Jordan Peterson that Justin Trudeau is “one of the big champions” of the Great Reset theory in an interview where the two touched on a wide range of topics that affect Canadian and international politics.

Lewis’ Christian values, her unique background in environmental studies, her perspective on lockdowns, and her commitment to conservative principles were all discussed in the interview that lasted almost two hours and was filled with passionate rhetoric from both participants.

At the outset, Peterson asked Lewis about her upbringing and how she came to be an outspoken Christian and conservative in Canadian politics.

Lewis said she “grew up in an ultra, ultra conservative family, religious wise, economically and fiscally … a traditional immigrant family.”

Paradoxically, she said her upbringing was conservative in values yet “politically liberal.”

“I didn’t even think about politics at all,” she said. And when it was time to move on to higher education, she said she “just wanted to get an education.”

Her activity in her Church community led her to consider “social dilemmas” that she witnessed while doing “prison ministry” and “working with at-risk youth.”

She began to consider politics more deeply and joined the Reform Party, which was at the time the dominant conservative party in Canada. Eventually, the party merged with the Progressive Conservative Party and was led by former Reform Party member and Prime Minister Stephen Harper.

She said that the traditional Canadian values of the Reform Party matched her thinking.

Lewis told Peterson that she doesn’t fit the stereotype for a typical conservative politician in the eyes of the mainstream media. Lewis’ ancestry is Jamaican, and she said that in the political climate today it is common to make “your identity your master status.” She added that even though she won the popular vote in the 2020 CPC leadership race, thus proving her popularity among voters, she “will not get media coverage and attention because [she doesn’t] fit their narrative.”

“Their narrative is that the Conservative Party is a white racist party,” she said. She said that in 2020 Kamala Harris, a non-Canadian, “was featured over 8,800 times more” than Lewis in Canadian news, “even though she was not running in our country.”

“You’re objecting on philosophical grounds … that you should be categorized by … your race and your sex, and yet the left insists that that’s the cardinal distinction between people, and then insists that people like you should be brought to the forefront,” Peterson said.

He then added he believed it was disingenuous that Lewis had the “self-evident characteristics that the left is trumpeting,” but she was “persona non grata” because of her pro-Christian and conservative views.

Not a typical environmentalist

Lewis and Peterson spoke at length about conservation and the environment. Lewis was educated at a master’s level In Environmental Studies and told Peterson that when she was studying in the 1990s climate change was “politicized.

Lewis had harsh words to say for the contemporary environmentalist movement. “We’ve taken climate change,” she said, “we’ve politicized it, we’ve made it a-scientific, and we’ve used it as a revenue generating tool to conjure up fear, and that wasn’t something that I found in my studies.”

She said that the focus of her studies relating to the environment focused more on sustainability and solution-oriented approaches to conservation and improving quality of life.

Lewis also said that “Big Pharma” was looked at as something to be skeptical of in her studies.

She blasted the idea that electric vehicles were an environmental solution. Expressing her belief that it is hypocritical that governments focus solely on fossil-fuel machines and infrastructure, she said, “But let’s take an electric car. They do not start from in a cobalt mine in Africa or even for a computer in a lithium mine in Africa with a poor five-year-old child. That if you looked at the just the abuse that that child had to endure, your heart would melt. And yet these are the miners of the components that we need in order to go in that electric car … Then you look at the battery … What is it charged with? It’s charge with carbon!”

Electric cars are “not as green as we are told,” she said. “Many of the green products are not as green.”

Against the Great Reset

The conservative politician made it clear in no uncertain terms that she was vehemently against the Great Reset theory put forth by Klaus Schwab.

“The Great Reset, which is not a conspiracy,” she said, “is a grand theory of where they see our entire society going.”

“They’ve been programming us to want to eat bugs,” she added.

Stating that Justin Trudeau was a big proponent of the Great Reset agenda, she said, “He wants to remake our society into a post nationalist image of what he considers to be an egalitarian, flat society.”

Lewis blasted the hypocrisy of the Davos conference that took place earlier this summer. “If you look at the recent conference that they had in Davos, they basically put limousines on jets in order to get them over there so that they could be driven around in luxury, but they want to limit the travel of average Canadians.”

She said “a two-tier society [is] being created.”

Peterson agreed that Trudeau is the “poster boy for the Klaus Schwab and WEF (World Economic Forum) types.”

He compared Trudeau with “the halfwit cliché mongers like Klaus Schwab.”

To end the interview, Lewis emphasized that sovereignty of both the individual and of Canada as a nation are paramount.

She explained that her goal as a politician is to fight against the Great Reset agenda and ensure that Canada does not go down the route of unmitigated globalism.

Lewis explained that her commitment to sovereignty of the citizen was why she refused to disclose her vaccination status.

“I made the tough decision of not divulging my vaccination status, even though I knew that I would not get a shadow cabinet position,” she said.

“Why did we have all these rules when we knew the truth of that it was just basically personal responsibility and informed consent if you wanted to take the vaccine.”

Votes for a new CPC leader must be submitted by September 6 to the Conservative Party of Canada.