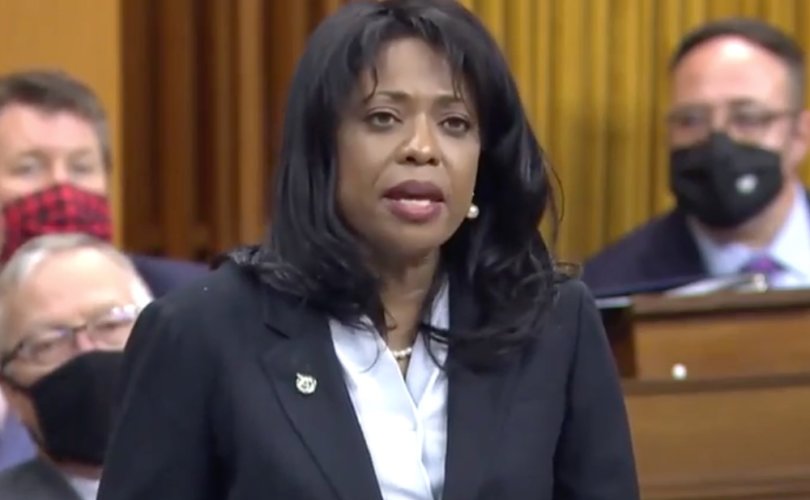 (LifeSiteNews) – Leslyn Lewis is calling for a public inquiry after a Pfizer executive admitted that their COVID-19 shots were not tested to see if they stopped transmission before they were released to the public.

On Saturday, Conservative MP Leslyn Lewis shared a video on Twitter in which a Pfizer executive admitted before the European Parliament that the company did not test whether the shots actually stopped the transmission of COVID-19 before releasing them. In her tweet, Lewis called for an inquiry into the issue, saying that it was “wrong” that incorrect information was spread to the public.

“We need an inquiry,” she tweeted. “Politicians and health experts promised Canadians that the vax would prevent transmission. Pfizer admits it never tested for that. Executives sat in silence while trusted officials gave incorrect info to the public. That’s just wrong.”

In her tweet, Lewis shared a video from Rob Roos, a member of the European Parliament who exposed Pfizer’s lack of testing for transmission during a COVID hearing in the European Parliament on October 10. In his video, Roos showed a clip from the session, in which he asked Janine Small, the president of international markets at Pfizer, whether “the Pfizer COVID vaccine [was] tested on stopping transmission of the virus before it entered the market?”

“Regarding the question around did we knew about stopping immunization before it entered the market … No!” said Small. “We had to really move at the speed of science, to really understand what is taking place in the market.”

In his video, Roos said that it was “shocking” and “even criminal” that governments allowed vaccine passports to become a reality when Pfizer had not even tested whether the shots stopped transmission.

“You don’t get vaccinated just for yourself, but also for others – you do it for all of society,” said Roos in his video. “This is what they told us. Today, this turns out to be complete nonsense.”

Roos said that this lack of testing on the part of Pfizer led to “millions of people around the world [who] felt forced to get vaccinated because of the myth that ‘you do it for others.’”

“This removes the entire legal basis for the COVID passport,” said Roos. “The COVID passport that led to massive institutional discrimination as people lost access to essential parts of society.”

While many “fact-checkers” are arguing that this is old news and that Pfizer never explicitly said that their vaccines stop transmission, this does not negate the fact that vaccination has been continuously marketed as the primary method of stopping the transmission of COVID-19. U.S. presidential medical advisor Dr. Anthony Fauci has declared numerous times that people who are vaccinated become “dead ends to the virus.”

“When you get vaccinated, you not only protect your own health and that of the family but also you contribute to the community health by preventing the spread of the virus throughout the community,” Fauci said in a CBC interview back in May 2021. “In other words, you become a dead end to the virus. And when there are a lot of dead ends around, the virus is not going to go anywhere. And that’s when you get a point that you have a markedly diminished rate of infection in the community.”

However, according to Small’s statement, this was never the case.

“This turned out to be a cheap lie,” Roos said. “This should be exposed.”