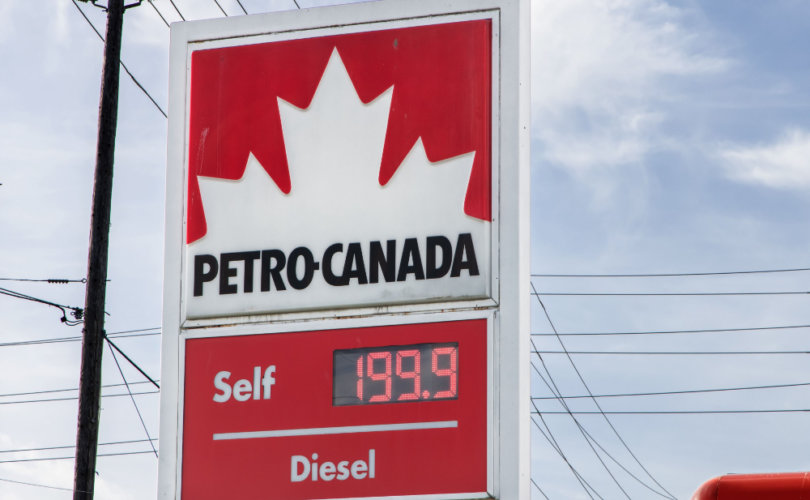 OTTAWA (LifeSiteNews) – Conservative Party of Canada MP and leadership candidate Dr. Leslyn Lewis said to help with rising costs that as prime minister she would scrap a carbon tax on fuel but would also develop a strategic oil reserve for the country.

“Driving is less affordable, and reports show Canadians are cutting back on essentials, even eating less food because of the higher prices. Food banks are overwhelmed, and demand only seems to be growing,” Lewis wrote in a recent blog post titled “A rainy day gas reserve.”

“While the Liberals would like to blame it all on Russia’s invasion of Ukraine, taxes, broader global supply chain challenges, and a lack of domestic production are all at play.”

Lewis noted how high gas prices have caused havoc on affordability in Canada, noting that a carbon tax on fuel needs to go.

“As prime minister, I will eliminate this hidden and dishonest tax-on-tax and provide some immediate and permanent relief to Canadians at the pumps,” Lewis wrote.

Lewis noted that in Canada, depending on where one lives, gas taxes can make “up to 38% of the price you pay at the pump.”

“So as gas prices have soared, the government has been floating in gas cash, inflating both prices and the size of government. Meanwhile, Canadians struggle to feed themselves and these shortsighted policies hurt the lowest income Canadians the most,” Lewis wrote.

The Canadian federal government under Prime Minister Justin Trudeau has mandated a carbon tax since 2019. Provinces can implement their own carbon tax scheme, but if they opt out, as many provinces such as Alberta and Saskatchewan have done, they are mandated to use the federal system.

Lewis called Trudeau’s carbon tax “offensive,” adding that a recent increase on the tax in April means Canadians are paying an extra 11 cents a litre for fuel just due to the carbon tax alone.

She then blasted how Canada is the only G7 member “to increase the price of gas for its citizens during a global energy crisis.”

“As I’ve stated before, I will cancel the carbon tax, but there are other taxes that Canadians need to know about,” Lewis wrote.

Lewis noted that Canadians are being taxed on top of taxes, which is factual as Canada’s Goods and Services (GST) tax is placed on top of nearly all products and services in the country, including gasoline.

She said that Canada needs to do “everything we can to stabilize prices, drive down inflation and keep the economy moving.”

“That’s why I also agree with calls from other campaigns to suspend federal taxes on gas for the summer. At $1.75/litre, suspending all federal gas taxes would save drivers about 25 cents per litre,”  Lewis wrote.

Lewis recently warned that Canada is headed for a global food shortage should the extreme green policies being pushed by the Trudeau government entrench their reach in the nation’s institutions.

Trudeau’s climate plan includes provisions to decrease nitrous oxide emissions, which the government says mainly come from farmers, from its 2020 levels by 30 percent by 2030.

The Trudeau government is also wanting to ban the sale of gasoline-powered cars by 2035, this despite the fact Canada has the third largest oil reserves in the world. Electric cars cost thousands more to make and buy, are not suited to Canada’s cold climate, offer poor range and long charging times, and have batteries that take tremendous resources to make and are very hard to recycle.

In Lewis’ blog posting, she said plainly that Canada needs to increase its oil reserve supply by creating a strategic oil reserve.

“Global supply issues are a key driver of the prices we’re seeing. Canada is sitting on the third-largest oil reserves in the world, yet when a crisis hits and supply is disrupted, we are at the mercy of the markets without our own reserve stock,” Lewis wrote.

“In addition to building up our oil and gas capacity, it’s time for Canada to join other major oil producers to establish a National Strategic Oil Reserve to ensure a baseline supply of oil in the event of global market shocks and disruptions like geopolitical wars and illegal rail blockades.”

During Lewis’ leadership run for the CPC in 2020, she first mentioned the need for Canada to create its own oil reserve.

“I believe this policy is needed now more than ever. It will require investment and partnerships across industry and governments, but if we’re serious about protecting Canada’s interests in an increasingly dangerous world, it’s a strategic necessity,” Lewis wrote.

“Canadians have suffered enough these past two years, and what they need right now is stability and hope. It’s time Canadians have a Prime Minister who will fight for affordability while delivering on a vision for energy security and prosperity that puts Canadians first.”

The United States began developing its strategic oil reserve in the mid-1970s. Canada never followed suit, despite looking into developing its own in the early 1980s.

In recent years, there have been calls by some in Canada for the nation to build out its own strategic reserve to shield the country from a shock oil event. However, as of today, nothing has materialized.