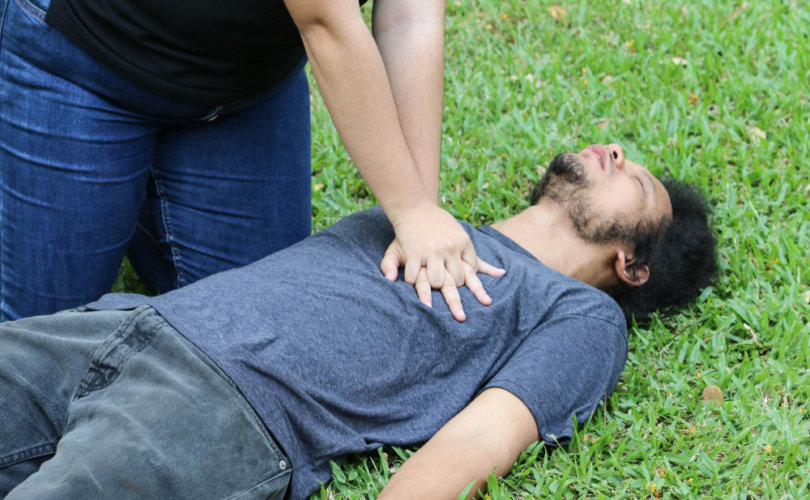 OTTAWA (LifeSiteNews) – Conservative Party of Canada MP and leadership candidate Leslyn Lewis said people need to hear “the truth” about whether or not a rise in Sudden Adult Death Syndrome (SADS) is indeed COVID “vaccine-related.”

In a recent blog post titled “Will they give us answers on SADS?” Lewis noted how the new “faceless” fear of SADS has manifested itself notably in “healthy young adults who suddenly drop dead.”

“We were quickly told that this wasn’t vaccine-related. But that is not good enough. If three young women go missing in your neighbourhood, and the police response was, ‘Well, it is probably not a serial killer’, that wouldn’t be good enough,” Lewis noted.

“We would demand answers, which is what we should do now.”

Lewis brought up recent statistics from the province of Alberta that show that deaths in the “unknown” category skyrocketed in 2021. In total, over 1,400 more people died of “unknown causes” in Alberta than of COVID during the height of the so-called pandemic in 2021.

She also brought up the recent sudden deaths of no less than six doctors in the Toronto, Ontario area in recent weeks. Lewis noted how the same health officials who early in the COVID crisis said that masks don’t work are now the ones not linking the jabs to SADS.

“They assured us that the vaccines wouldn’t be mandatory, and then made them so. They promised us the vaccines would stop transmission, and now are admitting they knew it never would. They can’t be surprised that assuring us that everything is fine with absolutely no proof, is not accepted by increasingly frustrated and disillusioned citizens,” Lewis wrote.

LifeSiteNews reached out to Lewis regarding her take on the COVID jabs and potential links to SADS but was told that she will not be commenting further.

In an opinion piece from June, Dr. Joseph Mercola noted that the mainstream media are ignoring links between the COVID injections and myocarditis (heart inflammation), which has led to a rise in deaths notably in young men.

Mercola noted that SADS is also an acronym for “sudden arrhythmic death syndrome,” and was first identified in 1977. He noted that underlying factors for both versions of SADS are “undiagnosed  myocarditis, inflammatory conditions, and other conditions that cause irregularities in the electrical system of the heart, thereby triggering cardiac arrest.”

“While SADS has been known to occur before, what’s new is the prevalence of this previously rare event,” Mercola said.

Mercola said that since the “rollout of the COVID jabs, the news has been chockful of reports of young, healthy, and often athletic people dying ‘for no reason,’ and doctors claim to be ‘baffled’ by it.”

“Any thinking person, on the other hand, can clearly see the correlation between the shots, which are now well-known for their ability to cause heart inflammation, and the rise in sudden death among young and healthy people,” Mercola noted.

In Australia, for example, the overall mortality in recent months is significant, statistics show. According to a government report, unknown cause mortality is up by more than 20 percent.

Also of note is the sudden deaths of young, mostly male professional athletes. According to the international sports body FIFA, they reported that deaths among professional soccer players in just  December 2021 totaled the yearly average of deaths over the past 12 years.

In her blog post, Lewis wrote that due to the fact she has been “bold enough to question the narrative from the beginning,” she has been getting a “steady flow of communications from doctors, nurses and paramedics who are concerned that SADS is indeed vaccine-related.”

“Like one woman who wanted to make sure her story reached me. In the span of just over half a year, her niece, and then nephew both died of suspected vaccine-related issues.”

Lewis also wrote that one person reached out to her to tell her that a “person died from a confirmed blood clot that health departments around the world have traced back to vaccines.”

Despite this, that person was “pressured to get vaccinated to keep her job.”

Another story told to Lewis recounted how an otherwise healthy member of the Royal Canadian Mounted Police, with four kids and a wife, “dropped dead with no explanation.”

“These are just two stories out of a countless number that I have had emailed to me, and have been shared with me in person at every single campaign stop,” Lewis wrote.

“It is heartbreaking that many of these people are more comfortable sharing their concerns and grief with me, than talking to their coworkers, friends or family.”

Lewis said Canadians “deserve to hear the truth” in a way that avoids a person being “slandered and cancelled.”

“Here is the question I would put forward to anyone calling me a conspiracy theorist,” Lewis wrote.

Dr. Paul Alexander, a Canadian health researcher and a former Trump administration official at the U.S. Department of Health and Human Services, in February published a study linking the COVID jabs to heart inflammation and blood clots.

Alexander’s study gives an overwhelming amount of evidence that the COVID vaccines are linked to cardiac issues.

“It is way past simple mistakes. Some of this is malfeasance,” noted Alexander, adding that he believes those who “abused their position” that resulted in lost “lives” should go to jail.

Lewis is the only pro-life candidate in the running for the CPC leadership and in the past has shared her concerns regarding the COVID jabs. She has been firm in her opposition to unrestricted abortion and is the only one endorsed by Campaign Life Coalition. The CPC will elect a new leader on September 10.