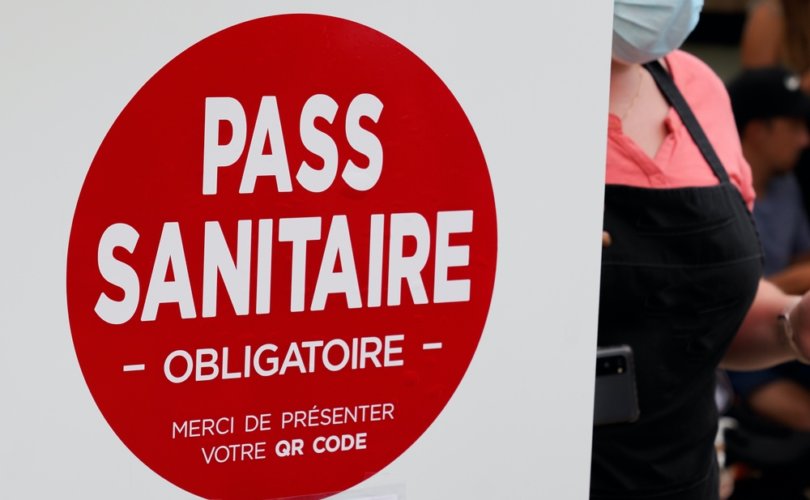 The administrative tribunal of Versailles has suspended the order by which the prefect of the Yvelines – the local representative of the French government –made showing the sanitary pass in order to access fourteen large shopping centers in the department (area) compulsory. This is a major victory against attempts to force unvaccinated citizens to take COVID tests every third day to prove negativity in order to enter shops where essential goods are sold.

The decision has already had repercussions in the north of France where the prefect spontaneously pulled a similar order he had signed several days ago.

Over the last few days, videos of people being pushed back by police or security guards from the French supermarkets where they wanted to buy food and other basic necessities without presenting the required “sanitary pass” have gone viral. In some cases, law enforcement officers have reacted violently against elderly people and women who just wanted to do their everyday shopping as they always have done.

— Article continues below Petition —
PETITION: Ban COVID vaccine mandates for schools and universities!
Show Petition Text
42833 have signed the petition.
Let's get to 45000!
Thank you for signing this petition!
Add your signature:
Show Petition Text

The sanitary pass can, in theory, be required only in centers that are larger than 20,000 square meters, and then only in departments (i.e., administrative regions) where the rate of “infection” is higher than 200 per 100,000 inhabitants, by decision of the prefect. After the sanitary pass law adopted at the end of July was assessed by France’s Constitutional Court and Council of State, a further condition was set: customers must be able to have access to essential goods in shops at a reasonable distance.

By order of the authorities, several hundred shopping centers and large supermarkets closed their doors to people without the sanitary pass on August 16 in a dozen of France’s hundred departments, and the numbers rose as massive testing led to finding more and more COVID positives. The department of the Yvelines, which is part of the greater Paris region, decided to reserve entry to sanitary pass holders in 14 shopping centers last Monday.

A team of lawyers headed by Yoann Sibille and Tarek Koraitem immediately took the decision to the administrative tribunal of Versailles in order to obtain an immediate suspension on the basis of a “référé liberté,” an interim relief procedure against decisions by public authorities.

Interestingly, the administrative tribunal of Versailles did not argue from the point of view of the local situation but looked only at the law. It was asked to consider that citizens without a pass would have to go to smaller and potentially more expensive supermarkets to get basic necessities. The lawyers also underscored the fact that the Yvelines, if not the whole Greater Paris region, had only reached a daily rate of infection of 191 for 100,000 inhabitants by August 20, instead of the threshold of 200 as fixed by the government.

The tribunal found that the restrictions had been applied “in a general and absolute manner to all shops located in the department stores and shopping centers listed in the order, without any arrangements being made to allow customers without a pass to access those shops selling essential goods and services,” and were therefore illegal.

The judges added that the restrictions were causing “a disproportionate infringement of citizens’ freedom of movement.”

In a previous, unsuccessful procedure in the Toulouse region, the local administrative tribunal judged that the prefect’s decision was correct because it had taken into account that people could find alternative solutions to obtain essential goods within the “population center” where restricted shopping centers find themselves.

In this case the director of a large supermarket had resisted the order and tried to have the decision reversed on the grounds that it was creating unfair competition with smaller shopping centers. He asked the judges to take into account that larger numbers of “unvaccinated” clients would now flock to smaller supermarkets.

“As the sales areas are smaller, safety distances will be less respected,” he remarked.

The 13,000 square meter Toulouse supermarket was ordered to continue checking the sanitary pass and was even prevented from letting in clients by a special door by which they would gain no access to other shops in the shopping center.

It has been obliged to post eight security guards at the shops entrances to control visitors and the director expects this will result in €25,000 (approx. $29,395 US) extra costs every month, while at the same time its turnover will probably fall by 30 to 40 percent.

The very different decision in Versailles will probably be appealed by the government but was immediately applied on Wednesday, meaning people could again go to every shop in the Yvelines without a sanitary pass. The two successful lawyers have decided to go further and attack similar decisions in all the greater Paris region, Paris itself and the six departments surrounding it. They have already written to the local prefects asking them immediately to retract sanitary pass orders or face emergency prosecution, as well as lawsuits for liability.

In the northern département of the “Nord,” including its capital, Lille, nineteen large shopping centers had been ordered to set up sanitary pass controls as of Tuesday by the local prefecture. The Versailles procedure was already underway when, on Monday evening, local authorities decided at the last minute to retract the order because the COVID infection rate had taken the form of a “descending plateau” (whatever that means).

On Tuesday morning, shopping center directors who had recruited dozens of security agents and made investments, including the setup of fast testing centers for COVID, in order to check their customers’ QR codes, were confronted with the fact that none of this would actually be necessary. According to the local press, not a few voiced their anger at the last-minute reversal of policy.

It can be hoped that the Versailles decision will lead to a number of restrictions on everyday shopping in large centers being lifted. However, sanitary pass requirements for restaurants, cafés, long-distance travel, cinemas, leisure and cultural activities, non-urgent care in hospitals, and visiting relatives and friends in hospital or homes for the elderly were all deemed legal by France’s Constitutional Court and will continue – in theory until mid-November, but security personnel for pass controls are being recruited for up to ten months beyond that date.

Despite increased testing as the unvaccinated are obliged to get COVID-negative passes for unavoidable everyday acts of life or just to be able to go to work, the absolute number of “infections” has been trending downward for the last ten days, reaching an average of fewer than 20,000 over the last seven days even though the “scientific experts,” who have been dictating government decisions for the last 18 months, announced in July that France would reach a daily average of 150,000 new “cases” by this time in August.

Most infections are linked to the “Delta” variant. The Delta variant is proving more contagious than previous strains of COVID-19, but it is four or five times less lethal than the November wave linked to the “Marseille 4” variant.