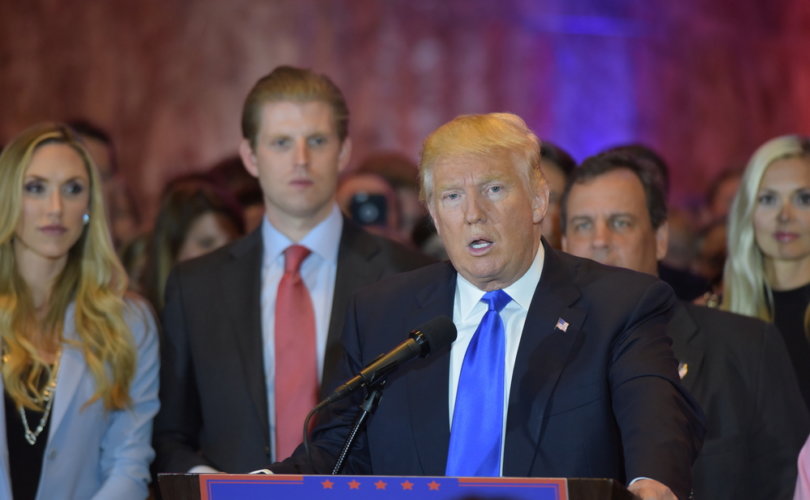 Nov. 9, 2016 (LifeSiteNews) – Like many other writers I know, I’m rewriting this late on Election Night. This night is historic, and one of the reasons for that is we have no way of predicting where things go from here. President Donald J. Trump? Surely I am not the only one who chuckles at this new reality. It’s stunning enough to render the most prolific commentators speechless. Perhaps he is the only one to have truly believed this would happen.

My reflections so far:

1. I was wrong. I have been saying from the very beginning that Trump couldn’t win in the general election, and that was clearly a colossal misunderstanding. That being said, I do not rescind any of my analysis of him. His treatment of women cannot be ignored, even in the face of a victory that will propel many to bypass the events that previously had the majority predicting that he would be buried electorally. Donald Trump, president or not, must be held to account by those of us who still believe the chivalry that he butchered means something.

2. Nobody—and I watched the meltdown on NBC and CNN as Election Night proceeded—predicted the level of anger that exists in the ranks of those Americans who don’t make the nightly news. Many of my friends told me that the anger was bubbling beneath the surface, ready to erupt, but I didn’t believe that it would come out the way that it did, or for the candidate that it did. But here we are. Millions of people who have been relegated to the status of slope-headed, flyover idiots for years finally got the revenge. The elites who could not fathom Donald Trump as a candidate are now forced to stomach him as a president—and the reason this comes as a shock is because their disconnect is so complete that the only way for these people to speak is by voting.

3. Watching the media and political elites have the contempt they dished out on everyone who didn’t speak like them for the past decade returned to them was delicious. Those of us who did not think like the commentators on CNN and the luminaries in Washington, DC—we the “homophobes, transphobes, misogynists, racists, and bigots”—finally got to see what we hoped was the truth all along—that most people didn’t think like these elites, anyway. A CBC commentator went from condescension to sweating gratitude that his “family was still together.” An ABC host snarkily commented—although early in the night—that “GOP voters cannot read and write.” This, of course, is precisely the elitist attitude that led to the results that had that commentator sputtering as if he could not read later on. I have never been a Trump fan, but to watch the media elites sweat and howl as the walls closed in was undoubtedly the most gratifying experience I have had in a very long time

4. When someone asked me early tonight who I wanted to win, my analysis was simple: If Trump loses, it will be a rejection of a misogynist, ignorant candidate. If Hillary loses, it will be a rejection of the media establishment, Hollywood, the entertainment industry, the House of Clinton, the Obama Presidency, and the Democratic Party. And so it was. And that, regardless of mitigating factors, is something to celebrate.

5. If the Democrats want to start blaming anyone, it’s their friends in the media. Bill Maher, of all people, admitted that the habit of the media elites – including himself – of calling Reagan, the George Bushes, John McCain, and Mitt Romney the harbingers of the apocalypse for years has caused voters to be impervious to the media’s habit of crying wolf. They were good and decent men – even Maher admits that now -but the slander heaped upon them has resulted in a flawed candidate like Trump shrugging off media condemnations like water off a duck’s back.

6. Clinton is now persona non-grata. She lost to Donald Trump. There can be no greater condemnation of the House of Clinton than that. That is the single most gratifying aspect of Hillary Clinton losing to Donald Trump: She didn’t lose to a “respectable Republican.” She lost to what was, conventionally, a terrible candidate. And she lost badly. That is how roundly she and her agenda were rejected by the American public.

7. There is hope for the Supreme Court. Donald Trump is apparently quite willing to outsource the boring task of justice selection et al to people like Vice President Elect Mike Pence, who are firmly pro-life. Which means, for the record, that the Senate holding out on the confirmation of Merrick Garland is hugely significant. With the House and the Senate in Republican hands, we could finally have a pro-life Supreme Court.

8. Media reports – for whatever those are worth – tell us that Trump is eager to outsource irritating issues he has no interest in to those in his inner circle, like Vice President Elect Mike Pence. Trump may not care about abortion, but Pence certainly does. This could be enormously good news for pro-lifers everywhere.

I’ve had a dozen people tonight ask me what a Trump victory means. I’d like to be able to respond, but I can’t. Trump has broken all the rules, smashed all the political paradigms, and created a new America. I hope and pray that we can create a better one out of the ashes of the House of Clinton. But only time will tell.