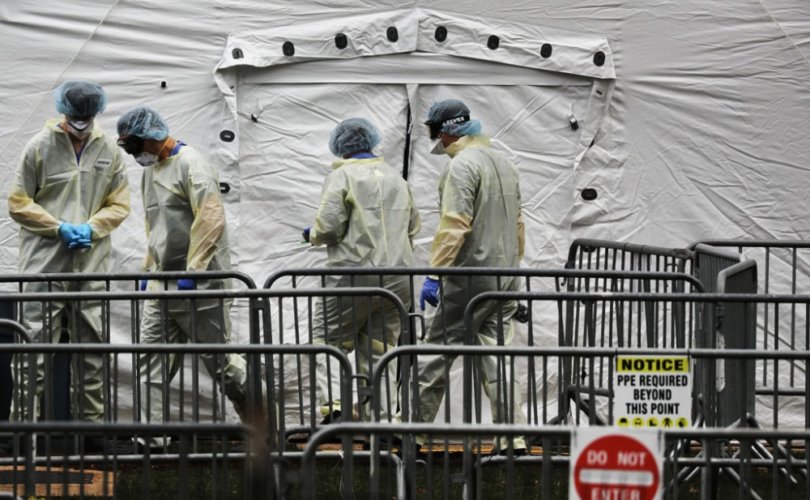 NEW YORK, April 7, 2020 (LifeSiteNews) — An LGBT activist shouted his hatred for evangelical Christians as he was led away by police in Central Park on Sunday afternoon.

Talen, who has made a career of mocking Christian clergymen, was in character as “Reverend Billy,” sporting a blond bouffant hairdo, a shocking pink suit, and a clerical collar as he planted an LGBT rainbow flag outside the 68-bed hospital.

A statement from the New York Police Department explained that Talen “was instructed to leave the area, he refused, [and] proceeded to plant a flag on a pole into the ground.”

As he was led away by six officers, Talen shouted his contempt for the Christian organization, saying they themselves were “the virus.”

“They’re predators,” he shouted. “They’re right-wing apocalyptic Christians. You’ve got to get them out of New York City.”

“Do what you can to get those white tents out of our [sic] city.”

Talen later tweeted the film of his remarks, writing, “Today I tried to deliver a rainbow flag to the Samaritan’s Purse field hospital in Central Park. Franklin Graham and his Lords Army are here with their homophobic racist hustle. Help not hate.”

“Samaritan’s Purse showed up with medical equipment and volunteers who are risking their lives,” wrote Oxossi. “Billy shows up with a bad attitude to do a pink panther impersonation. Scram! New York needs physicians not showboats.”

Talen’s objection to Samaritan’s Purse stems from its relationship with the Reverend Franklin Graham, the son of the late Reverend Billy Graham and the organization’s CEO. As a high-profile Christian preacher who believes in the traditional definition of marriage and that sex outside traditional marriage is a sin, Graham has become a scapegoat for LGBT activists who wish to shut down Christian preaching. Before the coronavirus pandemic closed all venues in the U.K., LGBT activists and civil authorities pressured all the businesses hosting Graham’s spring tour in Britain to cancel his reservation.

The Samaritan’s Purse organization also includes a reference to its scriptural beliefs about marriage in its statement of faith, saying:

We believe God’s plan for human sexuality is to be expressed only within the context of marriage, that God created man and woman as unique biological persons made to complete each other. God instituted monogamous marriage between male and female as the foundation of the family and the basic structure of human society. For this reason, we believe that marriage is exclusively the union of one genetic male and one genetic female. Genesis 2:24; Matthew 19:5-6; Mark 10:6-9; Romans 1:26-27; 1 Corinthians 6:9.

The organization is also pro-life, stating that “human life is sacred from conception to its natural end.” Founded by the Reverend Bob Pierce in 1970, the disaster relief foundation has offered supplies and medical help to communities suffering from natural disasters for fifty years.

In a statement to the media, Samaritan’s Purse denied accusations that it would discriminate against patients who experience or even base their identity on their same-sex attractions.

“Samaritan’s Purse does not discriminate in who we help, and we have a decades-long track record that confirms just that. We do not make distinctions about an individual’s religion, race, sexual orientation, or economic status,” the statement said.

“Our doors at the Emergency Field Hospital in the East Meadow are going to be open to all New Yorkers who need our help. We are here to save life, which is precious in God’s sight — and we do it all in Jesus’ Name.”

According to the U.K.’s Independent newspaper, Talen “has been arrested more than 50 times for protesting against companies like JP Morgan Chase, Disney, and Starbucks.”

By Monday, 2,738 people in New York City had died from the COVID-19 coronavirus. According to the Johns Hopkins Coronavirus Resource Center, the death toll from the virus in the city now stands at 3,485.