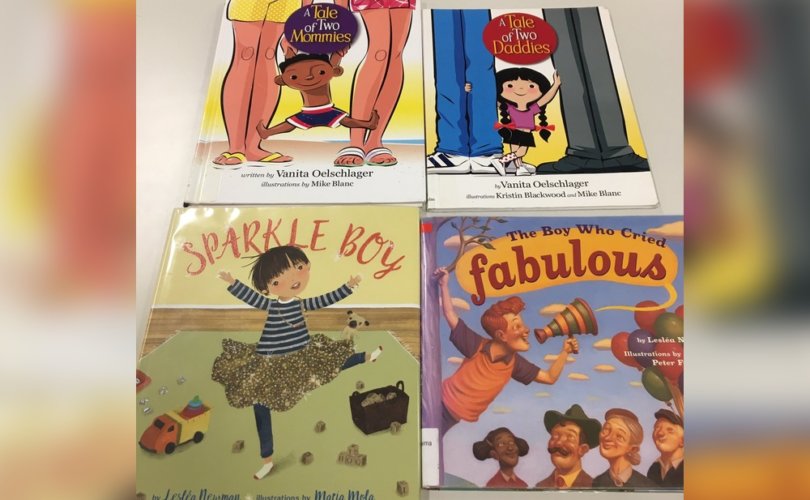 TORONTO, February 12, 2020 (LifeSiteNews) — A Catholic teacher who openly boasts about reading pro-homosexual and pro-transgender books to Grades 5 and 6 students cites the Toronto Catholic School Board adding “marital and family status, gender expression and gender identity” as prohibited grounds of discrimination to its code of conduct as his justification.

Paolo De Buono, an elementary teacher at Toronto’s St. James Catholic School, tweeted last week that the books he’s reading to 10- and 11-year-old students include Sparkle Boy, The Boy who Cried Fabulous, A Tale of Two Mommies, and A Tale of Two Daddies.

This morning we read Fabulous, a fabulous story by @lesleanewman about accepting ourselves for who we are & accepting others for who they are.@LubinskiTeresa, you’re welcome to join us if you’d like to read any of the other books with my class. https://t.co/jCodLBFiWQ

De Buono was a leading advocate of the Toronto District Catholic School Board (TCDSB) adding the terms to its code of conduct, which governs students and staff, during the months’ long and bitter battle over the issue.

Teresa Lubinski, whom he mentions in his tweet, is one of four trustees who voted in November against the change.

The TCDSB is one of the largest publicly funded school boards in the world, with more than 91,000 students in 195 schools, and De Buono earns about $102,500 a year.

In other posts in a Twitter feed replete with pro-LGBT messages, De Buono displays a photo of his tie emblazoned with the slogan “It’s okay to be gay” and freely “outs” LGBTQ Catholic teachers:

Blais, who has marched with Ontario English Catholic Teachers’ Association (OECTA) in Toronto’s Pride Parade, teaches at Toronto’s Cardinal Carter Academy for the Arts. She is a member of OECTA’s LGBTQ caucus, and Chaisson teaches at Ascension of Our Lord in Malton.

De Buono is also lobbying the board to allow “Diversity Klubs” for Grade 7 and 8, which he alleges are essential to combat “homophobia,” as he tweeted last week:

To support our Equity Action Plan at the school level, I proposed the Diversity Klub. I submitted a proposal in Sept., it wasn't set up by Jan., & so I submitted an updated proposal in Jan. A majority of Gr. 7-8 indicated an interest in participating.https://t.co/b8NVbqOxhJ pic.twitter.com/7eoU1jhDG9

De Buono’s actions seem to vindicate warnings by pro-family groups that changing the code of conduct would give LGBTQ activists cover to actively promote views of human sexuality contrary to Catholic teaching in Catholic schools.

Those for the change argued the TCDSB was obliged to obey ministry of education directive PPM 128 that ordered all boards to align their codes of conduct with the provincial and the Ontario Human Rights Code, both of which include the terms.

Opponents argued that gender ideology contradicts Catholic teaching and is harmful to children, and that Catholics have a constitutional right to teach their faith in their schools.

However, a TCDSB report appended to the agenda the night of the vote said the Toronto archdiocese had advised the board to change the code.

On November 11, the archdiocese released a statement conceding it recognized terms were added to the code as mandated by PPM 128, but adding: “While the archdiocese recognizes that terms such as gender identity are included in the Code, we do not accept the view of the human person which underlies this terminology, since that view is not compatible with our faith.”

LifeSiteNews contacted TCDSB director Rory McGuckin for response to De Buono’s statements, but was told the director would not comment. Nor did the TCDSB communications department respond to multiple requests for comment.

LifeSiteNews contacted Neil McCarthy, spokesman for Toronto Cardinal Thomas Collins, asking for a statement. McCarthy replied that “there is no public comment at this time.”

The archdiocese also stated that the TCDSB’s revised code “includes additional provisions to ensure that it is interpreted according to Catholic faith.”

But that’s a “nonsensical proviso,” especially in light of such interpretations of the Catholic faith as De Buono’s, says Jeff Gunnarson, president of Campaign Life Coalition.

“As if there exists such a thing as a ‘Catholic lens’ that one can strap onto sinful behaviour in order to make it acceptable for Catholics to engage in!” he told LifeSiteNews.

Campaign Life “begged” Cardinal Collins before the board voted “to publicly come out against their additions to the code of conduct and to demand that all trustees vote against them,” Gunnarson said.

Moreover, 1,915 people signed a Campaign Life petition “pleading with the cardinal to use his moral authority to encourage the trustees to reject gender identity theory,” he said, all to no avail.

Jack Fonseca, Campaign Life’s director of political operations, regards Collins’s failure to act at that time as paramount to a betrayal of parents, and contends that Catholics need their shepherd to take action now to repair the damage.

And as the cardinal is responsible under canon law to “to keep our Catholic schools Catholic,” says Fonseca, in this case that means Collins should see to it that the TCDSB fire De Buono.

“This pro-gay activist teacher has crossed a line and needs to be fired immediately. His excuse that he’s merely teaching kids about ‘respecting differences’ is so super-thin as to be non-existent,” Fonseca told LifeSiteNews.

Moreover, De Buono is “mocking our Catholic educational leaders – the trustees and the diocesan archbishop — by rubbing his dissent in their faces on Twitter, and essentially daring them to try to stop him,” said Fonseca.

“Silence by His Eminence about De Buono will represent yet another betrayal on his part, on top of the last one. It’s time to redeem himself with an act of courageous leadership, to stand up against the LGBT bullies who have taken over our Catholic schools,” he added.

Gunnarson said Campaign Life “asks all Catholic rate-paying parents to contact the Toronto Archdiocese urging the Cardinal to put an end to this dissent.”