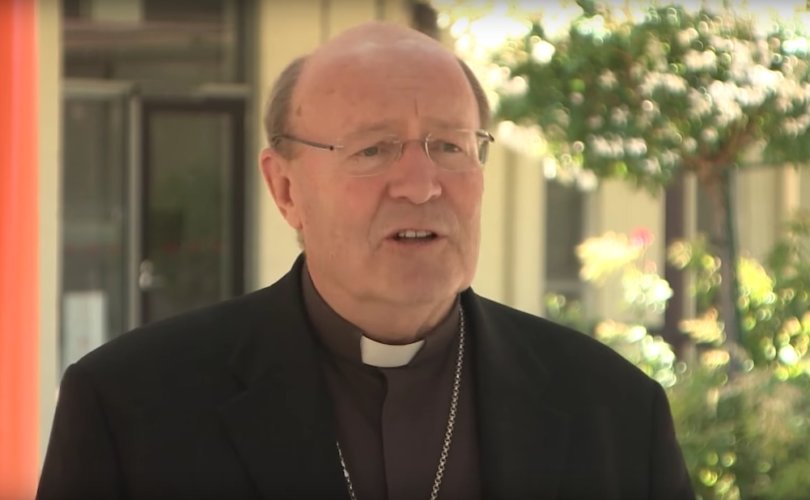 Tasmanian Archbishop Julian Porteous is disappointed the process ended without a strong affirmation of the Church’s freedom of religion and speech.

HOBART, Tasmania, May 10, 2016 (LifeSiteNews) – A Tasmanian LGBT activist and Green Party candidate has withdrawn his discrimination complaint against the Australian Catholic Church over a booklet on marriage he claimed had caused “pain and harm” to people.

At issue was the pastoral letter, Messing with Marriage, issued in booklet form and reportedly distributed to Catholic school children. It explained Catholic opposition to same-sex “marriage” and defended heterosexual marriage as “holy,” God-given and linked inextricably with procreation and child-rearing. It is still being distributed in anticipation of a promised plebiscite on the issue later in the year.

The Tasmanian anti-discrimination commission, which had the option of pursuing the matter even when the complainant withdraws, has announced it is dropping the matter too.

The Institute of Public Affairs’ Simon Breheny hailed the decision as a “victory for freedom of speech and freedom of religion. The laws that allowed for this complaint to be made should be repealed.”

But the Archbishop of Hobart Julian Porteous expressed disappointment that the process ended before the Catholic Church’s freedom of religion and speech could be vindicated. His statement read in part, “This decision by the Commissioner raises a number of issues which remained unanswered, in particular the ability of the Church to freely express its view on marriage.”

The complainant, Martine Delaney, a male-to-female transgender person, told LifeSiteNews, “I don’t want to take away anybody’s freedom of speech.” But during two conciliation sessions he did propose changes to the booklet, mostly to reframe its many expressions of Catholic doctrine on marriage and sexuality  as belief rather than fact.

Where the booklet states, “Every man, woman and child has great dignity and worth which can never be taken away. This includes those who experience same-sex attraction,” Delaney proposed preceeding that statement with the words “We hold.”

He also wanted an amendment where the booklet states, “If the civil law ceases to define marriage as traditionally understood, it will be a serious injustice and undermine that common good for which the civil law exists.” Delaney proposed to insert the words “the Church believes.”

But in the conciliation process, the Catholic bishops rejected his proposals and did not budge. This left Delaney, in his view, only two alternatives, taking the matter to adjudication with the state anti-discrimination tribunal, or withdrawing. “There was no purpose in continuing,” he told LifeSiteNews,  “because the Australian Bishops Conference clearly wasn’t interested in doing anything other than making nice noises.”

Delaney also did not want to be bound by the silence the conciliation process imposes on the participants. Nor was the prospect of taking the matter before the anti-discrimination tribunal in Tasmania appealing. “Already the case is being used by the other side [the Church] to complain, ‘We are being persecuted. We can’t speak out.’ But Delaney did not want to give opponents of same-sex “marriage” more ammunition in terms of free speech as the plebiscite approaches.

Now Delaney, who told LifeSiteNews he was raised in “a big Catholic family,” is happy that the public can learn that “the Catholic Church has some antiquated and interestingly strong views on human relationships.”

The booklet aims to present a clear statement of Catholic doctrine on marriage and sexuality, rooted in natural law. “Marriage,” it states, “is an institution designed to support people of the opposite sex to be faithful to each other and to the children of their union. It is not discrimination to reserve it to them.”

It also criticizes homosexual activists’ claim to champion equality. “This appeal to equality and non-discrimination gets things the wrong way around,” it states. “We must treat like cases alike and different cases differently.” Thus those with same-sex attraction are urged to pursue chaste lives.

Lyle Shelton of the Australian Christian Lobby told Australian news agencies that the complaint should never have accepted by the Tasmanian anti-discrimination commission.

“This was an example of where State-based human rights commissions are often being weaponised by activists against those with different views,” he said, adding that religious organizations and advocates of traditional marriage should not have to worry about “being dragged in front of a tribunal. These laws have no place in Australia.”