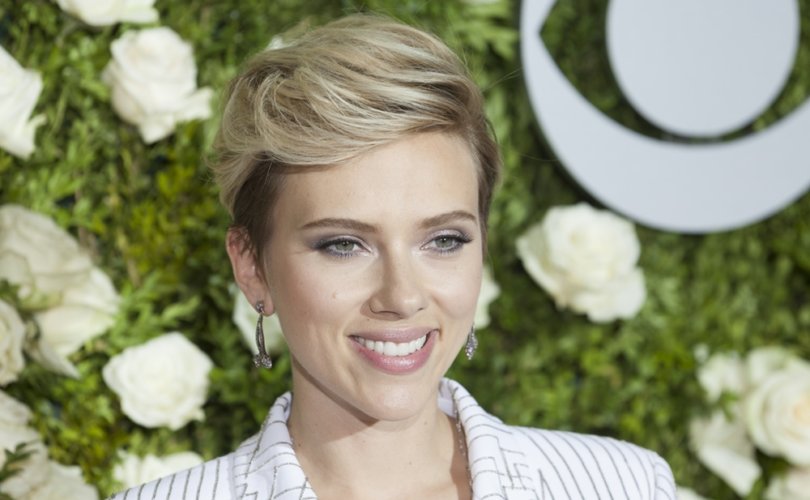 July 5, 2018 (LifeSiteNews) – Like most of Hollywood’s biggest stars, Scarlett Johansson is a vocal advocate for abortion-on-demand, but her dutiful service to one of the most cherished liberal causes has failed to insulate her from left-wing ire over an upcoming role.

The Avengers and Lost in Translation star is taking the lead role in Rub & Tug, based on the true story of lesbian crime kingpin Jean Marie Gill. Gill rose to power in 1970s Pittsburgh by “essentially taking on the physical identity of a man.”

The casting of straight, “cis-female” Johansson as Gill has outraged her fellow liberals, who demand transgender roles be played by actual transgender actors, the Huffington Post reports.

“Look, I’ve really liked Scarlett Johansson in some of her films, but I think the actor playing a trans man should BE a trans man if at all possible,” one disgruntled critic wrote on social media.

“Scarlett Johansson fancies herself intellectual but she refuses to learn anything,” another said.

Fortune’s Aric Jenkins wrote that the casting “highlights an industry-wide problem,” while CNN’s Nicole Chavez wrote a list of four trans actors and actresses who “could have been cast instead.”

“While the details of Gill's transition are murky, it's clear that he lived and presented as male,” OUT’s Rose Dommu wrote, “so why exactly is a cisgender woman playing him in a film?” Gill was a biological woman, as is Johansson.

“LGBTQ” actresses joined in the fray as well. Transparent's Trace Lysette accused Johansson and other non-trans actors of “steal[ing] our narrative and our opportunity” while “pat[ting] yourselves on the back with trophies and accolades for mimicking what we have lived.”

Indya Moore from POSE accused her of “reducing the existential experience of a trans man as playing dress up,” and Sense 8’s Jamie Clayton complained that the “real issue” was the fact that trans actors “never even get to audition FOR ANYTHING OTHER THAN ROLES OF TRANS CHARACTERS.”

A representative for Johansson responded in a statement telling critics “they can be directed to Jeffrey Tambor, Jared Leto, and Felicity Huffman's reps for comment,” a reference to other actors who have played transgender roles without significant backlash.

Pro-trans activist Ashlee Marie Preston called the “sarcastic” reply “deeply unnecessary” and called on Hollywood to “do better.” Others faulted her for invoking Tambor, who was fired from Transparent in February over allegations of sexual harassment.

Johansson previously faced backlash for playing an Asian character in an American adaptation of the Japanese Ghost in the Shell.

The real-life Jean Marie Gill spent ten years in prison for tax fraud and was involved in criminal activities such as operating prostitution and steroid rings. Deadline’s announcement describes the film version as featuring a “complex anti-hero,” so the favorability with which Rub & Tug presents her remains to be seen.