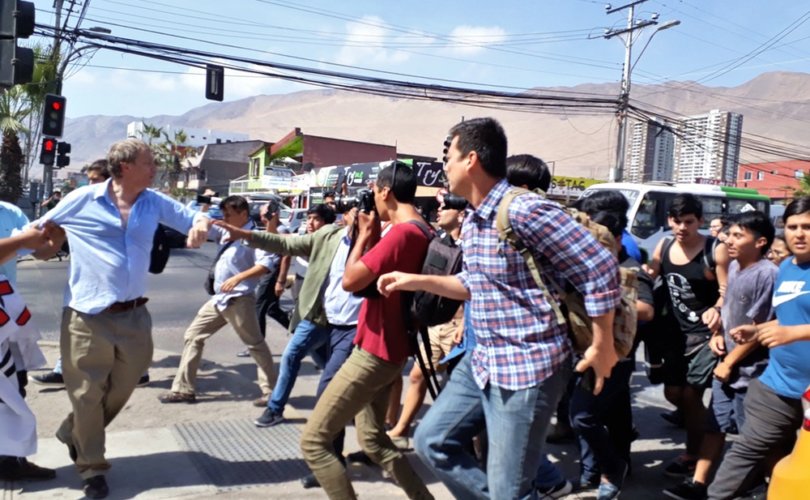 IQUIQUE, Chile, March 23, 2018 (LifeSiteNews) – Pro-life Chilean congressman Jose Antonio Kast suffered a violent mob assault earlier this week as he was attempting to enter an auditorium as a guest speaker at the University Arturo Prat in the Chilean city of Iquique.

The ordeal lasted for close to 30 minutes before the local police arriver wearing riot gear to disperse the mob.  Much of the assault was captured on video and can be seen below.

Jose Antonio Kast, a conservative politician who placed fourth in the last presidential elections in Chile was the most visible political opponent to the legalization of abortion and redefinition of marriage in Chile.  A Catholic and a father of nine, he can be seen in the video being called a Nazi, threatened to death, hit with rocks and bottles, kicked, and spat upon.

After being repulsed from the auditorium a small group of advisors attempted to shield him as they sought refuge from the attack, finally finding it inside a nearby gas station.

The violent mob remained outside laying siege to the gas station until the police arrived, at which point they ran away.  Mr. Kast was taken to a local hospital where injuries to one of his legs required him to wear a cast.  He also suffered torn ligaments in one of his hands.

Media interviews captured on camera at the scene of the crime revealed the motivation behind the attacks on Mr. Kast.  An unnamed LGBT university leader admits in one of these interviews that “the rejection of Kast is due to the fact that he has ridiculed the social demands of the LGBT groups, which have had to organize this protest as a way to make visible the institutional violence that LGBT groups have suffered at the university.”

Shortly after the attack, Carlos Montes, the center-right socialist President of the Chilean Senate reacted to the news of the assault by stating that Mr. Kast was provoking the attacks by going to places where he shouldn't be.  The University of Arturo Prat is the largest public university in the northern city of Iquique.

Meanwhile, the official Facebook page of the marxist Broad Front coalition, the nation's third largest political force with approximately 20% of the nation's vote, published a post, since deleted, that stated:

One cannot expect to engage extreme provocation in politics without suffering the consequences … he who embraces the banner of intolerance and hate cannot hope to be met with passive tolerance by the people.

One of the most violent attackers has been identified as Felipe Pardo, a local political representative for the Broad Front and a local student leader.  Mr. Pardo has deleted his Twitter and Facebook accounts after being identified as one of the attackers.

This is not the first time that Mr. Kast has suffered violent physical assaults at the hands of leftists motivated by hatred for his pro-life and pro-family views.  In August of last year, Mr. Kast had to be escorted by police as he appeared at the Chilean Supreme Court to testify against the law that legalized abortion in Chile. He was greeted by hostile crowds calling him a killer and a fascist.  After his testimony he had to be escorted again, this time by police in full riot gear as crowds threw objects and liquids at him.

Mr. Kast was the first president of the Hemispheric Congress of Parlamentarians, a group of nearly 700 federal legislators from nations across Latin America that defend traditional values, the rule of law and the principle of subsidiarity. In October of last year, Mr. Kast visited Washington DC to call attention to the dangerous influence of international organizations such as the UN and the Organization of American States, which while being funded primarily by the United States taxpayer, have been attempting to coerce nations in Latin America to abolish the right to life and redefine marriage.

The rise of a violent radical left and the incidence of leftist violence against Christians in the Spanish speaking world is increasing and yet is rarely reported in the international media.  LifeSiteNews has published numerous articles of violent leftist mobs attacking Christians in predominantly Catholic nations like Argentina, Chile and Spain.  Many of these attacks are linked to the rise of far left marxist parties like Spain's Podemos and Chile's Frente Amplio.