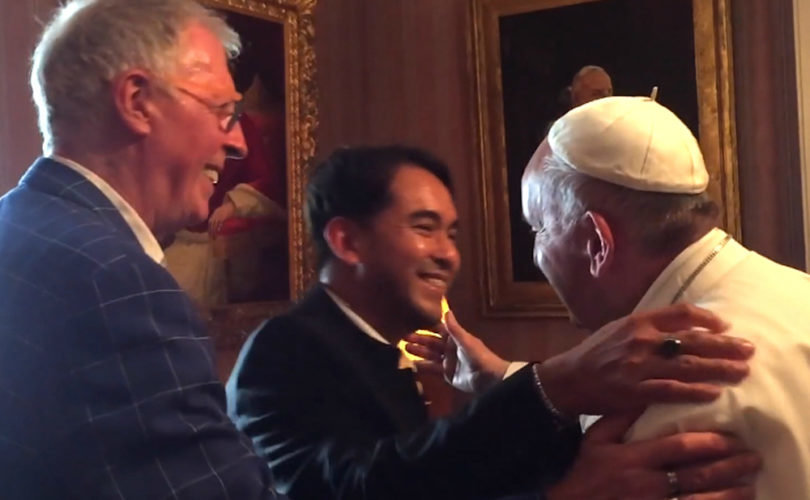 Pope Francis embraces the homosexual partner of his friend Yayo Grassi as Grassi looks on. The Sept. 23, 2015, private meeting took place during the Pope's trip to the United States.

ROME April 10, 2019 (LifeSiteNews) – An international delegation of judges, legal experts, politicians, and LGBT activists claimed at a historic meeting at the Vatican last week that Pope Francis took “active steps” to “resolve” a matter in Belize, where local Catholic bishops initially appealed the Central American nation’s 2016 overturning of its anti-sodomy law, but then unexpectedly withdrew that appeal.

The group of high-powered politicians and LGBT advocates who work to decriminalize homosexual acts called on the Pope during the April 5 meeting to issue a public statement “in which the official policy of the Holy See is clarified” with regard to the “criminalisation of homosexuality.”

It was during this request that the group noted Pope Francis’ alleged intervention in Belize:

We humbly request the Vatican to consider issuing a public statement in which the official policy of the Holy See is clarified, noting the active steps taken by Pope Francis to resolve the matter in Belize and the opinion of the UN Independent Expert on SOGI [sexual orientation and gender identity] sent to us for the purpose of this meeting: “I am convinced that a pronouncement of His Holiness would have been of fundamental importance in the work of fighting violence and discrimination that affects hundreds of millions of people every day”.

In August 2016, Belize struck down its anti-sodomy law, decriminalizing homosexual acts between two consenting adults. The Catholic Church, with a few other religious organizations, opposed the ruling, demanding that it be appealed. The Catholic Church, which was spearheading the appeal, began to not meet court’s deadlines for submissions. Finally, in March 2018, the Church unexpectedly announced that it would “no longer participate in this appeal.”

LifeSiteNews reached out for comment from the bishops of Belize, but did not receive an answer by press time.

The participants at the recent Vatican meeting requested that the Catholic Church declare that “Human dignity implies the respect of every person as created by God, hence criminalisation of LGBT people is today, as in the darkest times in the history of humanity, a manifestation of irrational hatred for that which is different from the norm and that homophobia is, in effect, a feeling of hatred and rejection which the Church condemns, wherever it takes place.”

Furthermore, the statement asked the Vatican to call on the world to “recognise that criminalisation of homosexuality and any form of consented intimate acts, sexual or not, between adults is an intolerable affront to human dignity.” Moreover, it called on the Church to oppose any sanctions, executions, arrests, detentions or discrimination on the basis of “sexual orientation or gender identity.”

A Vatican statement about the event said: “Parolin extended a brief greeting to those present, repeating the Catholic Church’s position in defense of the dignity of every human person and against every form of violence.”

Pro-homosexual Jesuit priest James Martin tweeted his delight over the meeting, calling it a “significant step forward” for the Vatican’s relations with the “LGBT community.” Fr. Martin wrote that Cardinal Parolin’s promise to study the report was yet “another step forward.” Fr. Martin has frequently promoted the normalization of homosexuality within the Catholic Church. Cardinal Raymond Burke, who was ousted from the papal Curia by Pope Francis, has said that the priest's teaching is “not coherent” with the teachings of the Catholic Church regarding sexuality.

In December 2008, the Vatican’s envoy to the United Nations said that the Holy See would not support a UN resolution to “decriminalize homosexuality” because it would likely place more pressure on countries to adopt or expand same-sex “marriage” or unions and would generally fuel the movement's push to normalize homosexuality.

In that same statement, however, the Vatican envoy said that the “Holy See continues to advocate that every sign of unjust discrimination towards homosexual persons should be avoided,” adding that it “urges States to do away with criminal penalties against them.”

Such a statement, however, appears to depart from the teaching of a previous pope on the matter. In his 1566 reform bull, Cum primum, dealing with the problem of clerical vice, including sodomy, Pope Pius V said that “if anyone perpetrates the nefarious crime against nature, because of which the wrath of God came upon the children of unbelief, they are to be turned over to the secular court, and if they are a cleric, they are to be stripped of all [clerical] order and to be subjected to a similar penalty.” Later, he wrote in Horrendum illud scelus that specifically clerics who committed homosexual acts were to be treated by that “same punishment that is received by laity who have fallen into this ruin, which is found to be constituted in legitimate ordinances.”