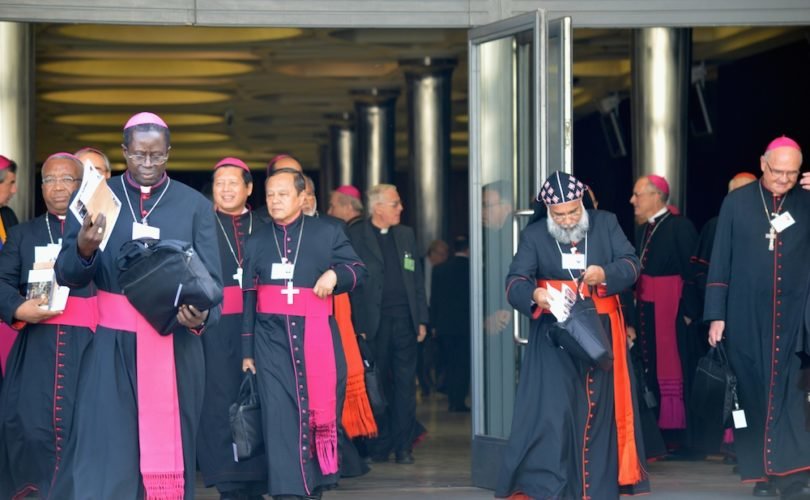 Bishops leave the hall at the Vatican where the Synod on the Family is being held last week.John-Henry Westen / LifeSiteNews

ROME – The Vatican’s Synod on the Family is giving homosexualist activists the “crack” they have sought in the Church’s doctrine on sexuality, at least according to Francis DeBernardo, the executive director of New Ways Ministry.

New Ways, a group that has been banned by the Vatican and several US bishops, has been in Rome for the past week for their “alternate” synod, a series of meetings by those who want to see the Church accept homosexuality or otherwise change its teaching on sexual issues.

“I think what we’re seeing is a crack in the ice that we have been waiting for, for a very long time,” De Bernardo said. “It’s a sign of a first step.”

Referencing the suggestion, reportedly made by some bishops at the Synod hall, that the Church should cease to use its traditional theological terminology for sexual sin, De Bernardo said he was “euphoric.”

DeBernardo said he could “name scores of people” who have left the Church over the Catholic Church’s teaching that the homosexual inclination is “objectively disordered.”

Michael Brinkschroeder, co-president of the European Forum of LGBT Christian Groups, cited the “Francis effect,” which he said is making bishops more free to “engage in dialogue” with homosexuals.

“Francis has given signals for bishops to start pastoral work and dialogue,” Brinkschroeder said, citing Pope Francis’s infamous quip, “Who am I to judge?” in response to a question about homosexual priests in 2013.

Meanwhile, one of the UK’s leading homosexualist activists who is working to change Catholic teaching, Terrence Weldon, wrote on his blog “Queering the Church,” that he perceives a “shift in tone” to a more “sensitive” approach to homosexuality.

“At the synod, there have been numerous indications of a coming shift in tone and more sensitive pastoral practice in treating lesbian and gay Catholics and their relationships, including recognition of the harm done by the language of ‘intrinsically disordered’.”

These, he said, included the intervention of Ron and Mavis Pirola, co-directors of the Australian Catholic Marriage and Family Council, who, he said, suggested that same-sex “couples need to be welcomed by their families.”

Some Synod fathers have issued mixed messages, including Cardinal Francesco Coccopalmerio, who said last week that the Church can never “bless” homosexual partnerings but refused to use the traditional language to describe same-sex partnerings.

Instead he said, “It’s something else to say that everyone makes his or her choice, that we don’t judge and that they might be great people even with this condition, but it’s different to say that the union itself is blessed or a good thing.”

For the most part, however, there is little new coming from the Synod. Thus far, the only suggestions of De Bernardo’s “crack” in the Church’s teaching on sexual morality and marriage are coming from unsurprising sources, mainly prelates who have long been more publicly favorable to the homosexualist movement’s goals. Conversely, the bishops and cardinals who have always staunchly defended Catholic teaching continue to do so.

The only difference is the clarity being lent to the positions by the proximity at the Synod, which one observer who works in the Vatican told LifeSiteNews “is starting to look like sides lining up.” While in their public statements most bishops maintain that the atmosphere is cordial and “fraternal,” reports are growing of growing contention on the Synod floor between two irreconcilable theological camps.

“But what we are seeing now, is certainly not a shift of the whole Catholic Church towards a more permissive position on homosexuality or any of the other doctrines or practices regarding sexuality, marriage and family,” the source told LifeSiteNews.

For decades there has been a sharp division inside the Catholic Church between those who see Catholic teaching as “an obstacle to human happiness and those who see it as the only path to the same,” the source said. The fact that the media, representing the secular world, favors the first side should not lead the public to believe that any change is coming soon. The Synod is merely forcing that longstanding argument into the public view.

“This division in the Church has certainly been very visible for over fifty years, at every level. The fact that one side or another is getting more press time right now makes no difference inside the Church, which may be what these activists are responding to.”

“It remains to be seen whether the pope will publicly endorse either or will try to continue to reconcile them.”