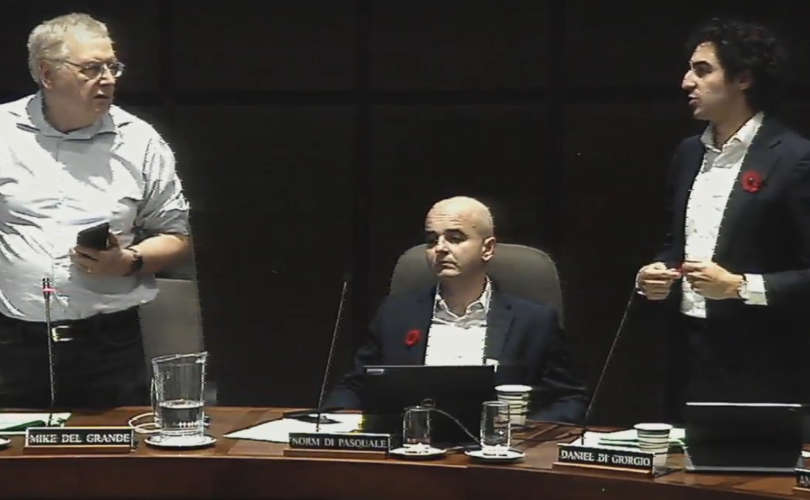 TORONTO, November 21, 2019 (LifeSiteNews) — LGBTQ activists and other board constituents are lobbying to oust a Catholic trustee for warning that adding “gender identity” and “gender expression” to the Toronto Catholic School Board’s code of conduct could have far-reaching consequences.

But supporters of Mike Del Grande say he is being pilloried for defending Catholic teaching and telling the truth, albeit in a wryly unusual way.

They also suggest the campaign against the veteran trustee is an attempt by rivals to prevent Del Grande from becoming chair of the Toronto Catholic District School Board (TCDSB), which has more than 90,000 students and is one of the largest Catholic school boards in Canada.

Eight trustees led by chair Maria Rizzo voted for the policy change, and a TCDSB report produced for the meeting stated the archdiocese approved the terms, provided these were interpreted through a “Catholic lens.”

Critics of the change argued that it endorses the spurious gender ideology in violation of Catholic teaching, and will harm students.

Proponents insisted that the board had to add the four terms because the province had directed it to align its code of conduct with the provincial and Ontario Human Rights Code, and that not doing so would exclude and harm LGBTQ individuals.

But Del Grande is under fire now for an amendment he proposed at the end of the marathon meeting to illustrate that adding the terms is the beginning of a “slippery slope.”

“This is as slippery as it’s going to get,” he said, before reading a list of categories of sexual identities that the board should add to the motion, which included bestiality, transvestitism, and pedophilia.

Del Grande was interrupted in his recitation by trustee Daniel Di Giorgio, who asked the director to rule the amendment out of order.

“All these poor people are children of God created in the image of God and they need to be recognized,” he said. “The point that I wanted to make was that you wanted to add four terms, and my concern is that why stop at the four terms because it doesn’t cover everybody.”

Director of Education Rory McCuckin ruled the amendment out of order because the categories “are contrary to the Criminal Code of Canada,” but nevertheless, enraged parent Nicole Richard, godmother to a “transgender” TCDSB student, launched a petition last week asking the board to “remove” Del Grande as Ward 7 trustee, the CBC reported.

Rizzo also opined that Del Grande should be investigated.

“As the chair of the board, I expect our members to be civil, and to not liken our LGBTQ community to bestiality and polygamy and all sorts of other things,” she said.

Del Grande’s amendment “was illustrative” and not meant to adopted, Crawford told LifeSiteNews.

“He was saying that once you open the door to an ideology which is against Catholic Church teachings, such as gender ideology, then you're further at risk for being asked to accept other ideologies,” she said.

“We are going to be continually over time be asked to accept new developments and new movements within our society that may or may not be in line with the teachings of the Catholic Church,” added Crawford.

“And as a Catholic school board, we want to support the teachings of the Catholic Church.”

Calls to remove Del Grande over his amendment are “crazy,” Tanuan said.

“The point was to prove a point through hyperbole, we know that.”

Del Grande was trying to show the consequences of accepting gender ideology, which is not supported by the Church.

Del Grande himself told CBC that his amendment was “hyperbolic” and described it at the meeting as a “Howard Moscoe thing.”

That was a reference to long-term city councillor infamous for brash and ribald outspokenness, and with whom Del Grande served during much of his 11 years as a city councillor, three as budget chief for Mayor Rob Ford, a position Del Grande resigned from in January 2013 over what he called the city’s “emotional” free spending.

Almost two years later, Del Grande forsook city politics and his lucrative $105,000 annual salary to run for the $18,000-a-year position as Catholic trustee, an elected office he also held from 1997 to 2003.

“He sacrificed himself,” Tanuan said, adding that Del Grande would be a solid candidate for chair, a position trustees vote on next week, and which is being contested by Markus de Dominico.

“That’s probably why they are against him,” Tanuan told LifeSiteNews.

Del Grande has “the heart of a servant,” said Jack Fonseca, director of political operations for Campaign Life Coalition, Canada’s largest pro-life, pro-family lobbying group, which mobilized supporters to oppose the change to the code of conduct.

He is also “a humble man who doesn’t boast about his own accomplishments, so let me share with you that he was personally responsible for building St. Aidan’s Parish in Scarborough,” Fonseca said.

With Del Grande’s “serious financial acumen that nobody else comes even close to possessing” and “commitment to providing an authentically Catholic, faith-filled education to our families, it’s obvious he’s the perfect choice for chair,” Fonseca said.

Pediatricians: Gender ideology is the latest assault on our children

Telling kids they can ‘change’ sex is harmful: US Catholic bishops with other faith leaders

Lies and Bullying from the Human Rights Campaign

Pediatrician destroys transgender ideology: ‘Puberty is not a disease,’ shouldn’t be prevented

Gender dysphoria diagnoses are too general, and they’re destroying people

Twitter has declared war on biology by banning ‘misgendering’

Transgender tyranny is the next terrible step in the sexual revolution