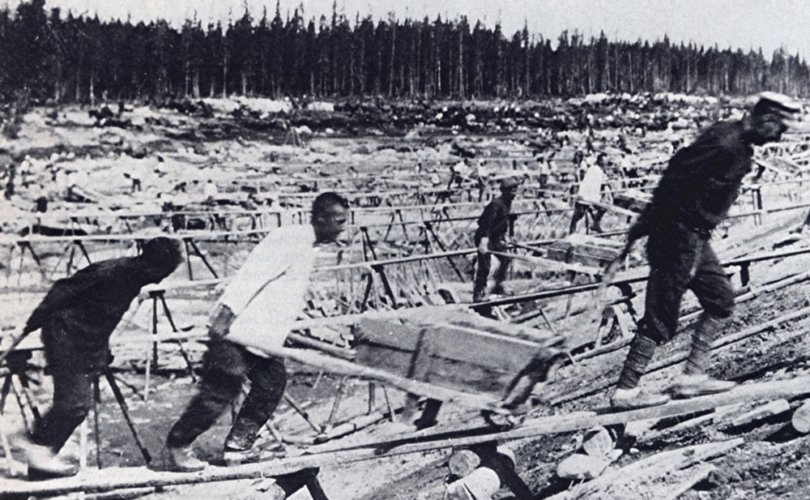 Russian prisoners build the White Sea–Baltic Canal (circa 1932), one of the first major projects in the Soviet Union using forced labor of gulag inmates. Thousands died amid the harsh conditions.Wikimedia Commons

LONDON, September 12, 2018 (LifeSiteNews) – A homosexual student group at Goldsmiths, University of London, is under fire for a series of tweets defending the idea of sending dissenters to “gulags” for forced re-education.

The exchange began during a Twitter debate over “trans-exclusionary radical feminists” (TERFs), feminists who refuse to recognize men who “identify” as female to be “women.” The group LGBTQ+ Goldsmiths had called for targeting feminist academics they considered to be TERFs, the Daily Telegraph reports.

“The ideas of TERFS and anti-trans bigots literally *kill* and must be eradicated through re-education,” LGBTQ+ Goldsmiths claimed, then threatened to “arrange to send [critics of their position] to the gulag.”

Invoking the gulags – notorious prison camps instituted by Soviet dictator Joseph Stalin, in which countless prisoners died of execution, starvation, disease, or exhaustion – provoked scores of negative responses. Yet LGBTQ+ Goldsmiths doubled down, making a case that the sites were actually humane institutions unjustly maligned by the victors of the Cold War.

“The Soviets did away with life sentences and the longest sentence was 10 years. Capital punishment was reserved for the most heinous, serious crimes,” the group claimed in a series of tweets it has since made private, but have been transcribed by Twitchy. “The penal system was a rehabillitary one and self supporting, a far cry from the Western, capitalist notion of prison.”

The group went on to claim that all able-bodied inmates were paid a wage comparable to free workers, and that the gulags featured “regular classes, book clubs, newspaper editorial teams, sports, theatre & performance groups.”

As for why “gulag” is almost universally regarded as a dirty word, LGBTQ+ Goldsmiths suggested that the prisons are victims of “anti-communist, orientalist myths and lies propagated by the CIA.” It added that any contrary evidence that comes from or relies on the U.S. State Department are “probably pretty trash sources.”

In fact, the Soviet Union used the gulags to imprison (among others) wealthy peasants arrested during the regime’s takeover of agriculture, World War II prisoners of war, military officers or ethnic minorities suspected of disloyalty to the state, suspected traitors, public intellectuals guilty of dissenting thoughts, and “many utterly innocent people who were hapless victims of Stalin’s purges,” according to the Encyclopedia Britannica.

Prisoners were forced into lumber, construction, or mining work, and threatened with starvation or execution for refusing to comply. Between deliberate executions and inhumane conditions, it is estimated that 15-30 million prisoners died from 1918 to 1956.

“The LGBTQ group’s interpretation of the history of the Gulag system is madness,” said Claire Graham, a special education needs teacher who challenged the LGBT group.

The tweetstorm received heavy pushback, including from Anne Applebaum, a historian who has written multiple books on the Soviet Union:

this is…not accurate. not even close.
no, the gulag was not “rehabilatory,” or self-supporting, or educational. but that's just the tip of the iceberg.
second time in a month I've had an opportunity to recommend a book on twitter: https://t.co/PjUm6avkmw https://t.co/XwpfMDAmOs

So the Soviet camps got a bad press – they rehabilitated people, whereas TERFs “literally kill” them. And science must be “decolonised and de-essentialised”, as soon as somebody figures out what this even means. Or is this just a joke account?

They could take the time to listen to the words of an actual survivor, but that would require compassion and an open mind. Something we know trans activists are often incapable of. I'll leave this here, anyway, for those who do want to learn. https://t.co/rgJkHqXbBu

Goldsmiths Students’ Union has since suspended LGBTQ+ Goldsmiths, saying that the tweets violate its code of conduct. The union has also barred the group from future support for campus activities. “We condemn the abhorrent content of the tweets and they are in complete opposition to the views and values of the Students’ Union,” it said in a statement backed by the university.

While explicit advocacy of totalitarian tactics is typically rare in Western cultural debates, pro-family advocates in the United States, United Kingdom, and Canada argue the goals and tactics of “mainstream” LGBT activists are similar, including boycott and intimidation campaigns, coercing private citizens to produce pro-LGBT messages, crackdowns on so-called “hate” speech, and declarations that the LGBT agenda “has to trump” religious liberty.